The History of the California Flower Market

1884: The Domoto brothers landed in San Francisco from Wakayama Prefecture in Japan as part of the first wave of Japanese immigrants to the mainland of the United States. They operated their nursery at 3rd and Grove (Martin Luther King, Jr. Dr.) streets in Oakland until 1892 when they moved to a larger location on Central Avenue and E.14th St. By 1902, the Domoto Brothers Nursery was importing and producing both European and Japanese flower varieties, including many different kinds of chrysanthemums.

Early 1890s to 1909: A wholesale outdoor flower market was held two times a week at the corner of Kearney Street and Market Street, between Lotta’s Fountain and Podesta & Baldocchi florist. Growers were able to transport their produce to the market using the Southern Pacific and Key System ferry lines and trains. Chinese, Japanese and Italian immigrants were among the early growers of cut flowers and ornamental plants in Northern California.

April 18, 1906: The 1906 San Francisco earthquake and fire destroys the majority of downtown San Francisco. In July, San Francisco issued an ordinance to landowners to remove all debris and the open air flower market was able to resume in San Francisco. At the end of the year, however, the City of San Francisco passed another ordinance that made street sales illegal. Leaders amongst the Japanese American flower growers organized the California Flower Growers Association where growers were able to protect their mutual interests.  The California Flower Growers Association, led by the Domoto brothers and comprising 42 charter members, was tasked with the goal of finding a new location that was accessible to growers bringing their supplies to sell.

1906-1912: As the number of tenants grew, the California Flower Market moved locations, first to a basement on Bush Street, between Kearny and Montgomery streets, and then to a two-story building at St. Anne’s Place.

1912: The California Flower Market (CFM) was officially formed as a corporation under state law with 54 Japanese growers as shareholders. The first general meeting was held on June 12, 1912 at which Motonoshin Domoto was elected as president.  The by-laws of the CFM required that all shareholders be growers, wholesalers, shippers, and/or florists

1914 – 1920s: The war and post-war period saw an increase in the demand for flowers. More efficient transportation meant that flowers could now be trucked and shipped to other locations.

1936: A badge buyer identification system is introduced for retail florists in order to adhere to sales tax laws. Non-retail buyers can not purchase directly from the Flower Market.

The San Francisco-Oakland Bay Bridge opened, creating a direct route by road between Oakland and San Francisco and easier access to the Flower Market for growers in the East Bay. 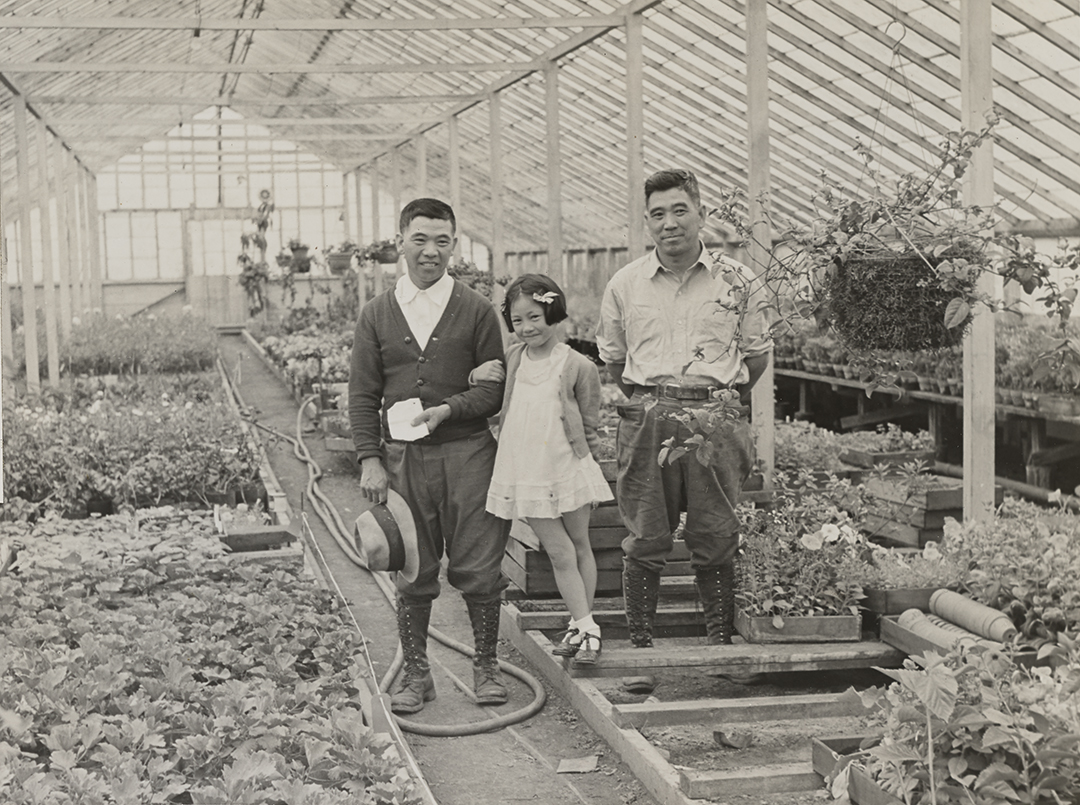 California Flower Market – Growers in Greenhouse1942-45: During World War II, President Franklin Roosevelt issued Executive Order 9066, causing forced removal and incarceration of Japanese Americans living on the west coast of the United States. Those with flower operations lost their land and facilities unless they were able to lease to non-Japanese American growers. At the Flower Market, Sam Sakai, elected to the California Flower Market board in 1938 and president in 1940, continued running the Flower Market, making mortgage payments and managing the business by mail while he and his family were incarcerated, first at the Stockton Assembly Center and later at Rowher incarceration camp in Arkansas.

Post WWII: Sam Sakai returned to the Bay Area in 1945 where he re-established the California Flower Market board of directors and successfully negotiated the return of leases in the Flower Market. Takeshi Yatabe, a Nisei, took over as manager of the Flower Market. Sakai served as president for 30 years, and Yatabe as manager for 26 years. (footnote). For more information on the exclusion and incarceration of Japanese Americans during WWII, please refer to the Resources page.

1956: The flower growers moved to a temporary place on 12th Street and finally to a permanent building on the corner of 6th and Brannan streets in the South of Market district of San Francisco. With a grand opening in September 1956, the building covered 135,000 square feet and could accommodate 100 growers in its space. (footnote) Two of the original shareholder groups, the California Flower Market, Inc. and the San Francisco Flower Growers Association, operated the market under the name, the San Francisco Flower Terminal.

1960s: Local flower growers were forced to compete with overseas suppliers when cut flower production started in Colombia and other South American countries where the climate supported the cultivation of many varietals, and where production costs were lower. The use of refrigerated containers allowed these cut flowers to be easily transported.

The Flower Market started an annual “Design Show” bringing 800 to 1000 people to the Flower Mart to see different arrangements and learn about the latest designs and techniques.

1970s: While many women worked alongside family members in the business, most of the family-run growers were represented at the flower market by men. The Flower Market saw a change in the 1970s with an increase in the number of women retail florists conducting business at the Flower Market.

1980s: The AIDS epidemic hit the Gay community in the San Francisco Bay Area, many of whom had played an integral role in the flower industry as designers and florists.

1986: The Badge System was created with the CA State Board of Equalization to allow vendors a number system to conduct non-tax wholesale sales to their trade customers (badge holders).

October 17, 1989: At 5:04 a.m. a magnitude 6.9 earthquake on the San Andreas fault, shook the Bay Area. Despite the severity of the quake, no one at the Flower Market was injured and only light structural damage was incurred. The Flower Market received a green tag which permitted them to continue business.

1990s: The Flower Market committee (it was two markets at that time) rebranded under the name, the San Francisco Flower Mart.

1991: Martha Stewart visits the Flower Market, writing about it in her popular quarterly magazine, Martha Stewart Living. Her article on hydrangeas caused a boom in demand for this flower.

1990s-2000s: As the flower market customer diversified over the years, it also drove demand for different types of flowers and more interesting and mixed arrangements. By the early 2000s, well over 100 species and types of cut flowers were grown in the U.S., including spring and summer annuals, perennials, and woody trees, shrubs, and grasses.

2014: KR Flower Mart, LLC, an affiliate of Kilroy Realty Corporation, a Los Angeles-based developer, purchases the California Flower Market and the San Francisco Flower Growers’ Association. A new location is planned at 901 16th Street in the Potrero Hill neighborhood that will comprise both warehouse and retail space.

2020: On March 16th, the City and County of San Francisco issued a health order that put the city on a quarantine lockdown due to the Covid-19 pandemic. It took two days to shut down the market and, because distributors and wholesalers were not at first considered essential business, growers were forced to destroy 85% of their flowers. On April 22, 2020, just two weeks before Mother’s Day, the Flower Market was given essential business status and allowed to reopen, under special Covid-19 conditions. 2020 saw one of the busiest Mother’s Day sales in the history of the market.