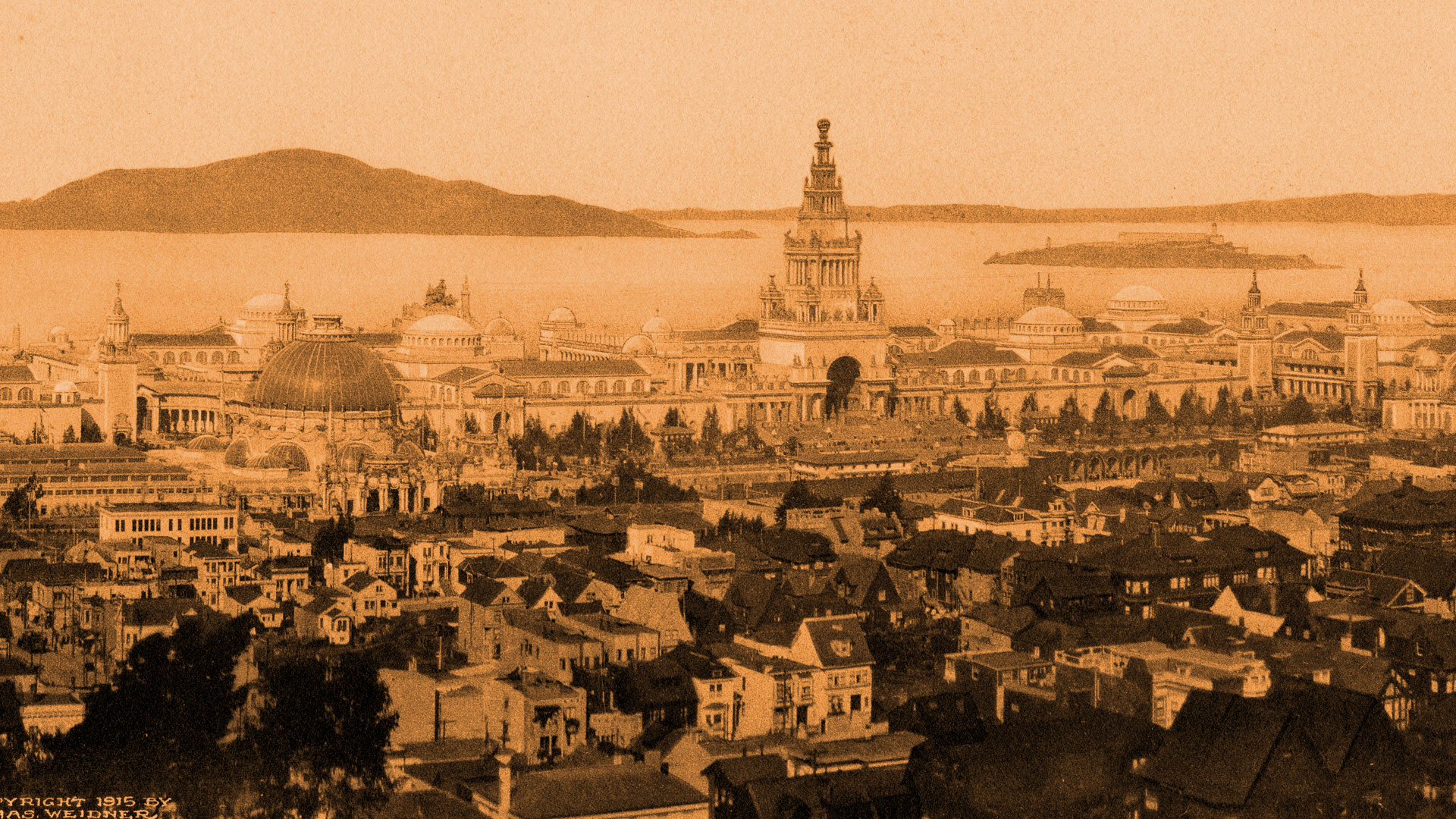 San Francisco and the 1915 World's Fair

In the early twentieth century, a splendid walled city of domed palaces, palm-lined courts, and monumental statuary arose on San Francisco’s northern shore. The 1915 Panama-Pacific International Exposition (PPIE)—a world’s fair commemorating the opening of the Panama Canal just nine years after the devastating earthquake and fires of 1906—emerged on 635 acres of land previously submerged by water. This exhibition is presented in conjunction with San Francisco’s city-wide centennial celebration of the Panama-Pacific International Exposition.

In the early twentieth century, a splendid walled city of domed palaces, palm-lined courts, and monumental statuary arose on San Francisco’s northern shore. The 1915 Panama-Pacific International Exposition (PPIE)—a world’s fair commemorating the opening of the Panama Canal just nine years after the devastating earthquake and fires of 1906—emerged on 635 acres of land previously submerged by water.

The fair featured eleven exhibition palaces showcasing objects from every corner of the globe, more than 1,500 sculptures commissioned from artists all over the world, 65 acres of amusement concessions, and an aviation field. Fifty California counties, forty-eight states, and twenty-one countries mounted displays in the exposition’s grand pavilions. Then, after the fair closed, this ephemeral city was all but erased from the landscape. In the intervening ten months, nearly nineteen million people—about twenty times the population of San Francisco at the time—were drawn to the spectacle.

What accounts for this world’s fair’s popularity, and what connections can we make with the present day?

In celebration of the PPIE’s centennial anniversary, the California Historical Society presents two related exhibitions exploring the PPIE as a critical event that shaped the San Francisco we know today—a city undaunted by tragedy, audaciously innovative, rising to meet the challenges of the day.

At the California Historical Society

City Rising at our headquarters on Mission Street is an in-depth account of the fair—its planning, construction, and extraordinary components—from how San Francisco became host of the exhibition, to the fair’s remarkable innovations, to its attractions and concessions. Through vintage photographs, souvenirs, and other artifacts, visitors will journey inside the exposition to see what fairgoers encountered 100 years ago.

A video series with architects, historians, curators, authors, and memorabilia collectors—all of whom embody the spirit of the fair—provides a contemporary perspective to this important cornerstone of San Francisco’s past, bringing history alive for our age.

On view every night after dark until 11pm is Engineers of Illumination , a projected light project by Optic Flare. This series of artist-based, projected-light installations uses CHS’s windows to honor the stunning achievements of the Panama-Pacific International Exposition of 1915. Throughout the exhibition, six light-based artists will show an after-dark artwork for the gallery’s front and side windows, each running for approximately six weeks.

At the Palace of Fine Arts

What better place to explore the exposition’s legacy than the only fair building still standing at its original location? City Rising at the Palace of Fine Arts provides an overview of the fair and how it captured the attention of the city, state, nation, and world during an era of international conflict and America’s can-do spirit. Why did so many people visit the fair and what did they see? How did the fair transform the city’s geographic, social, economic, and cultural landscapes? What did the Palace of Fine Arts represent, and why was it saved from destruction? An illustrated map and an animated video complements images and artifacts in telling the story of this captivating world’s fair.

Reflect with us on this moment in San Francisco’s history when the city stepped onto the world stage to represent the country and state at the beginning of a century in which both would figure prominently.

About the Centennial Celebration of the Panama-Pacific International Exposition (PPIE100)

February 20, 2015 marks the 100th anniversary of the Panama-Pacific International Exposition (PPIE), the World’s Fair celebrating the completion of the Panama Canal and showcasing San Francisco—its recovery from the ashes of the 1906 earthquake and fire and its world trade potential. Throughout 2015, the PPIE100, a citywide consortium of cultural, civic, and historical organizations, will conduct centennial programs to commemorate the PPIE’s historical significance and to reflect on its legacy. Collaborating on what San Francisco Mayor Edwin M. Lee described as “a uniquely San Francisco way to celebrate a centennial—to focus on then, now and the future” are the California Historical Society, San Francisco Recreation and Parks Department, Maybeck Foundation, and Innovation Hangar. Learn more about this anniversary at www.ppie100.org.