Boomtowns: How Photography Shaped Los Angeles and San Francisco, Selections from the California Historical Society Collection considers the first one hundred years of photography in what would become California’s two most prominent cities. As San Francisco and Los Angeles entered a period of rapid, unimaginable growth following the state’s entry into the Union in 1850, photography played a significant role in defining and shaping how the rest of the country understood California. Photographers also captured and responded to the distinctly different topography and development patterns of the two cities. The exhibition features works by both anonymous photographers and well-known artists—such as Carleton Watkins, Eadweard Muybridge, Minor White, Laura Adams Armer, and Arnold Genthe—and includes photographs made for a broad range of purposes, from civic boosterism and real estate development, to industry and art. 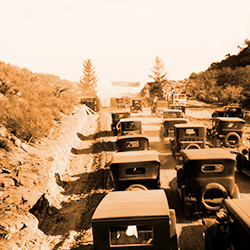 The new medium of photography arrived in California just in time to witness the period of rapid, unimaginable growth ushered in by the state’s official entry into the Union in 1850. Boomtowns: How Photography Shaped Los Angeles and San Francisco considers the significant role photography played in defining how the rest of the country saw California’s two most prominent cities. Almost as instantly as San Francisco was built up following the discovery of gold, it became the photogenic muse of enterprising view makers. It was a few decades later that Los Angeles began to boom with the arrival of the railroad and booster campaigns that relied heavily on photography to tout the city’s year-round sunshine and abundant, fertile land. By the turn-of the twentieth century both cities were among the most photographed places in the world.

The exhibition looks at some of the earliest views of these places, how photography promoted growth, who these cities were for, and what forces shaped them. The exhibition invites visitors to look critically at photographs made for a broad range of purposes, from civic boosterism and real estate development, to industry, and art. It also examines places where the competing interests of different groups led to layers of development and redevelopment—sites such as Union Station in Los Angeles which was once Chinatown, or Washerwoman’s Lagoon in San Francisco which became the Panama-Pacific International Exposition site and later the Marina District.

The exhibition features works by both anonymous photographers and well-known artists, such as Ansel Adams, Laura Adams Armer, Arnold Genthe, Eadweard Muybridge, Carleton Watkins, and Minor White. The earliest selection is a unique and extremely rare 1851 daguerreotype panorama by an unknown photographer picturing San Francisco’s shoreline. For audiences that paid to see it on display back east, the panorama made visible all the opportunities and natural resources that the push westward promised. Among the later selections is a group of photographs taken by German geographer Anton Wagner who traversed Depression-era Los Angeles on foot with his Zeiss Ikon camera. The hundreds of photographs he made were research material for his 1935 book—the first study of the sprawling metropolis—in which he marveled that the city appeared to have “no beginning nor end.” From pictures of San Francisco on fire following the 1906 earthquake, to photographs taken in the 1920s of the nascent Hollywoodland housing development—which bequeathed the city its iconic sign—this exhibition draws exclusively from CHS’s extensive photographic holdings.

C.C. Pierce Company, Automobiles clustered at the opening of the Mulholland Highway, 1924