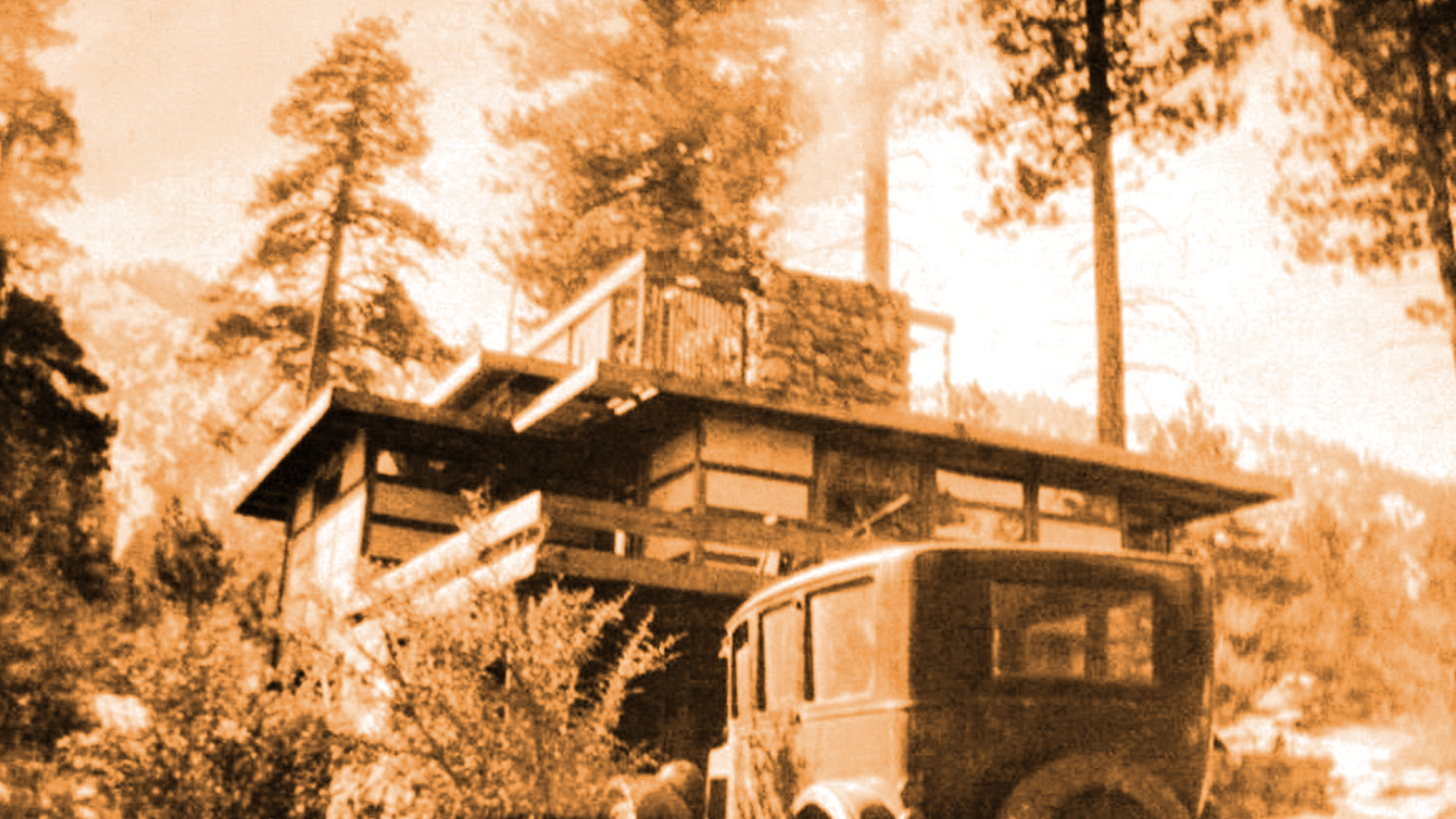 Rudolph Schindler is no household name today – but holds legendary status among architects and design aficionados. His stamp on Southern California certainly endures past his 1953 passing – especially in mountain communities. This is because Schindler is the originator of the A-frame cabin – a design he created in Lake Arrowhead (San Bernardino County) in 1934.

Rudolph Schindler is no household name today – but holds legendary status among architects and design aficionados. His stamp on Southern California certainly endures past his 1953 passing – especially in mountain communities. This is because Schindler is the originator of the A-frame cabin – a design he created in Lake Arrowhead (San Bernardino County) in 1934.

But that bit of Schindler’s career is a footnote to historians, who consider his flat-roofed, modernist designs much more influential. And while nothing remains in Wrightwood above Los Angeles in the San Gabriel Mountains today, as far as we know anyway, Schindler created a fine example of his work there in 1926.

The three-level cabin showed off many features that anticipate today’s progressive home design. They included Japanese-style panel walls and sliders, and windows and decks that blur the distinction between indoors and out. An enclosed rooftop space was likely intended for nude sunbathing and outdoor summer sleeping – a nod to Schindler’s (and his client’s) freethinking ideas. The architect’s love of fireplaces was present in a sturdy hearth.

No study has chronicled the structure’s story though. “Very little (has) been written about the Lovell cabin at Wrightwood,” Judith Sheine, a Schindler biographer formerly of Cal Poly Pomona who now lives in Oregon, told me.

“It’s an interesting project, and I wish I could give you more information,” she said in April 2020.

Built with a fiberboard product called Celotex, the cabin took on water from snow or rain in 1927 and apparently was demolished – leaving nothing but a series of photographs. These offer hints of a plan suited for outdoor lounging, socializing and recreation. Historians know a lot about the thinking behind it – the cabin was part of a series of homes Schindler designed with fellow Austrian emigree Richard Neutra for a prominent Los Angeles client.

His name was Dr. Philip M. Lovell. “Doctor” may have been an exaggeration – he called himself a “quack and a cultist” years later. But in Southern California in the 1920s, an appointment with Dr. Lovell was a hot ticket. He had a chiropractic degree, but this early Dr. Phil was a forerunner of the New Age, celebrity philosophers the region become known for.

Son of Ukrainian-Jewish immigrants, Lovell had the good fortune to meet Harry Chandler, general manager of the Los Angeles Times. Soon Lovell occupied a privileged niche – the paper’s health columnist. In a matter of months, his columns drove dozens of clients to his South Broadway Los Angeles office. His bank account bulged – in need, perhaps, of the kind of vegetable juice diet he usually recommended.

Lovell found the cure in spending cash on homes. Two that survive in Southern California are among the most-written-about home designs anywhere. They are the Lovell Health House designed by Richard Neutra in the Los Feliz neighborhood of Los Angeles, and the enigmatic Lovell Beach House in Newport Beach. Completed by Schindler in 1926, almost the same time as the Wrightwood structure, the Orange County structure is one of Schindler’s most famous works.

If Lovell’s cabin remained in Wrightwood today it would be a landmark, likely a museum with tours.

Schindler, however, would not complete any additional work for Lovell – primarily because of his interest in Mrs. Lovell.

“Mrs. Lovell was really in love with (Schindler),” Dione Neutra added. “Dr. Lovell was not very happy about that.”

Dione Neutra made clear in the 1978 interview that the Wrightwood cabin’s structural failure was a big factor in Lovell never hiring Schindler again.

Leah Lovell, the doctor’s wife, recalled in a separate interview that her husband worked closely with Schindler designing the mountain house.

“Schindler incorporated all of Phillip’s ideas in the cabin,” she told architecture scholar Esther McCoy.

Additional sleuthing was completed by John Crosse, an independent researcher who retired from the Los Angeles Bureau of Sanitation in 1999. Crosse has written about Southern California architecture legends like Paul R. Williams, Neutra, Schindler and others – adding many insights.

Among them is the photograph attached to this article, perhaps the best image of the Wrightwood structure that exists. Crosse found it in the Cal Poly Pomona Neutra archive – and suggests Neutra took it himself.

The image offers clues. The lot is on the south side of a street running east-west. It is winter or early spring. Snow lays on Wright Mountain and Blue Ridge. Smoke rises from the cabin’s fireplace. Morning sun bathes its east walls. A telescope sits on the north-facing deck. Perhaps the two architects spent the night at the cabin after it was completed.

Did they ski at the nearby Big Pines resort? No account seems to exist.

Another pair of photos, perhaps from the same visit, are published in the Historical Society of Southern California’s Southern California Quarterly in 2002 by Gary Marmorstein, Philip Lovell’s great-nephew. They show trees surrounding the cabin that might be familiar to locals.

Shown the cabin photos in November 2020, Stuart Baker of the Wrightwood Historical Society declined to guess. “Maybe military intelligence could figure it out,” he said.

Perhaps some Wrightwood resident knows a story that will shed light on the cabin’s former location. Any details would add to the scanty knowledge that exists – and solve a mystery that’s lasted for close to a century.