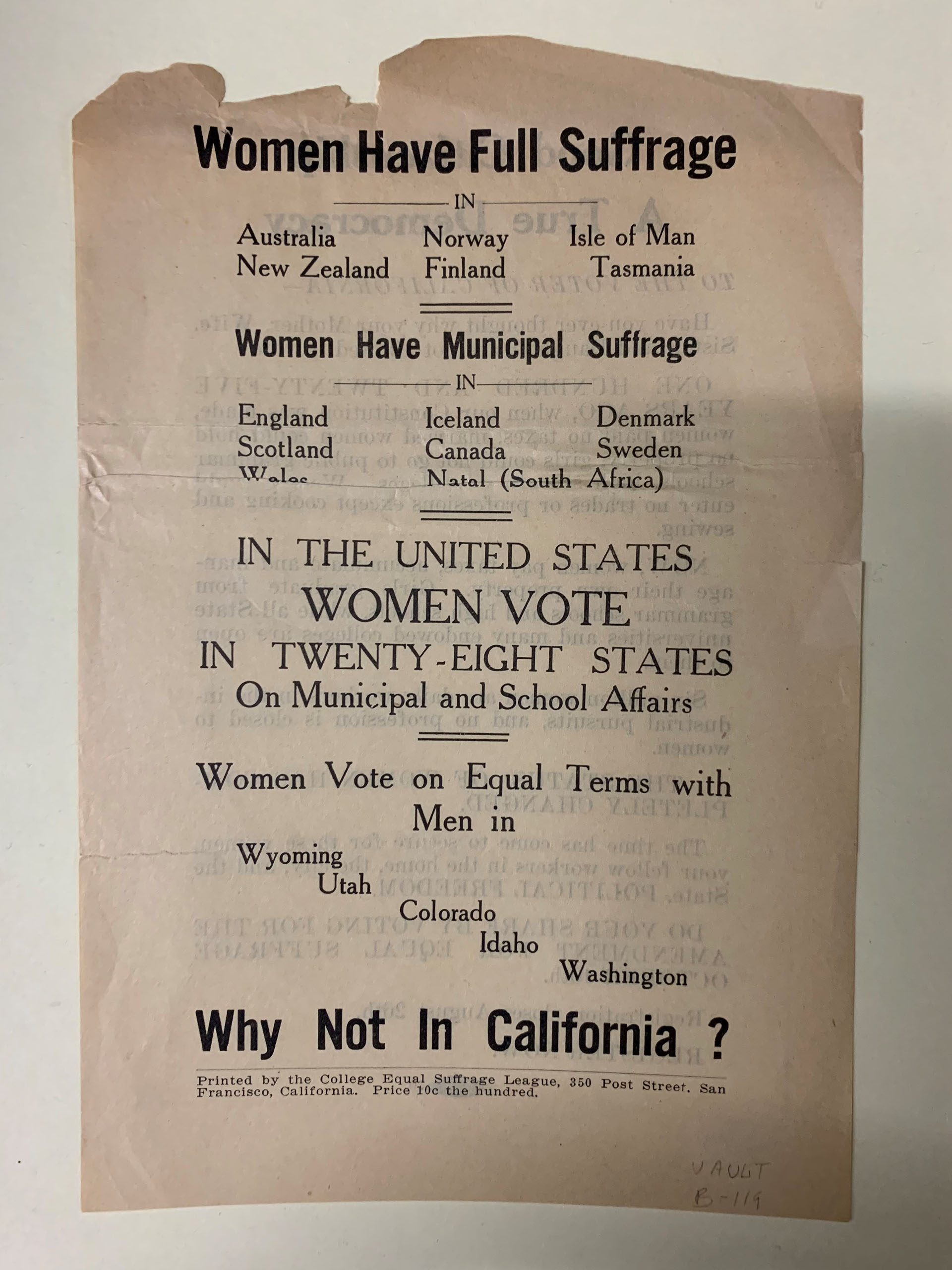 Women’s Suffrage in California: What One Document Reveals

Almost a decade before the Nineteenth Amendment enfranchised women nationally, California became the sixth US state where women could vote alongside with men. This post looks at a piece of ephemera from the California Historical Society’s collection that illuminates the campaign for women’s suffrage.

On October 10, 1911, California became the sixth US state where women could vote equally with men, nine years before the Nineteenth Amendment enfranchised women nationally.

The battle for suffrage had been long, with many dramatic highs and lows. In 1893 the California Legislature passed a bill recognizing women’s suffrage rights, only to have the governor veto it. Three years later, in 1896, suffrage made it onto the ballot as California Amendment 6, only to fail with 44.6 percent support.

One artifact from the California Historical Society’s collection can tell us quite a lot about the campaign for women’s suffrage. It’s a piece of ephemera, specifically what was once known as a broadside—a paper printed on one side and intended to be posted, publicly distributed, or sold. Although undated, we can tell that it was created in support of the 1911 campaign and not the earlier one in 1896 because of the other states and countries it lists. (Specifically, women in Washington State obtained suffrage in 1910.) We also glean from it that the fight for suffrage was not just happening in the United States; it was a global movement, and California appears here situated in that much wider international context.

This particular piece of campaign material was created by the College Equal Suffrage League, a national organization begun in 1900. A prominent member was Maria de Lopez, whose father had come from Mexico to the San Gabriel Valley in 1849. De Lopez was a member of the Los Angeles–based Votes for Women Club and president of her local College Equal Suffrage League in 1911, when campaigning was at a fever pitch. Thanks to her, suffrage leaflets were translated into Spanish, fifty thousand of which were distributed by election day. She gave speeches from Ventura to Pasadena in both English and Spanish, and a week before the election she drew a crowd of thousands at a rally in Los Angeles Plaza.

Earlier campaigns, such as the one in 1896, were predominantly led by white, middle-to upper-class women, but the 1911 campaign would never had succeeded had it continued in that vein. Working women such as Selina Solomons, labor activists such as Maude Younger, women of color such as Sarah Massey Overton, single women, church groups, women’s clubs—they all came together as a coalition. There were indeed divisions, there were disagreements, and there were exclusions, but leaders had learned from earlier failures that victory required partnerships among those who shared a desire for progress.

Surviving broadsides, pamphlets, flyers, buttons, and other materials are all evidence of the incredible amount of work that went into the 1911 campaign—the organizing, the coordination, the fundraising, the publicity and promotion, the strategies, the messaging. In small print at the very bottom of our broadside we can make out the words “10 cents the hundred.” Supporters would buy them in bulk and distribute them as far and wide as possible.

Because of the demographics of earlier campaigns, their meetings were mainly held in private homes. The 1911 campaign was grassroots and far more public, and involved large meetings in public spaces, marches in the streets, speeches in churches and union halls, and plenty of door-to-door work. Like the message in this broadside, the 1911 campaign was big and bold and visible.

Our broadside also brings to our attention the different kinds of suffrage that were part of the conversation at the time: “full suffrage” versus “municipal suffrage” or “school suffrage.” Women would be given voting rights in some arenas, such as the local school district or at the level of city government. In 1893, California’s governor vetoed a bill granting women even the right to vote in school elections, remarking that they could not be trusted to go to the booth for one purpose and not try to vote in other matters.

By bringing up comparisons with other states, this broadside prompts the question of what the California movement learned from other states’ campaigns. One takeaway was the previously underestimated importance of the rural vote. In 1869, forty-two years before California women could vote, Wyoming legislators passed a suffrage act giving women in the territory the right to vote and hold public office (when the territory became a state in 1890, women retained the right to vote). Lawmakers wanted to bring more women to the sparsely populated region, and recognized that if women had a say in how the territory was run, they would be more willing to settle there.

Leading up to 1911, women’s suffrage was strongly contested in densely populated areas, particularly San Francisco, Oakland, and Alameda. These were the places heavily influenced by the liquor trade, and where saloon owners virulently opposed female suffrage, convinced that women would vote for prohibition. Knowing that the cities would be a tight call, and knowing that women’s suffrage had passed in states with more rural voters, California suffrage leaders very strategically went after the rural vote. Public speakers were mobilized and sent to every town with at least two hundred residents.

And indeed, on Election Day, October 10, 1911, San Francisco and Alameda counties voted down the measure, and it just barely passed in Los Angeles. But when votes from the rural districts were tallied days later, suffrage had come out on top by a difference of 3,587 votes—a hairsbreadth of just 0.73 percent. The strategy had paid off. Men from the San Fernando, San Joaquin, and Sacramento Valleys, the state’s three major farming areas, had overwhelmingly voted to give women the vote.

Other states now had fresh impetus to push forward with their own campaigns. Note this 1912 broadside from the Oregon chapter of the College Equal Suffrage League, which cites California as a success story!

To read more about the often overlooked role of Asian American, African American, and Native American women in California’s women’s suffrage movement, see the California Commission on the Status of Women and Girls website: https://women.ca.gov/women-of-color-and-the-fight-for-womens-suffrage/.