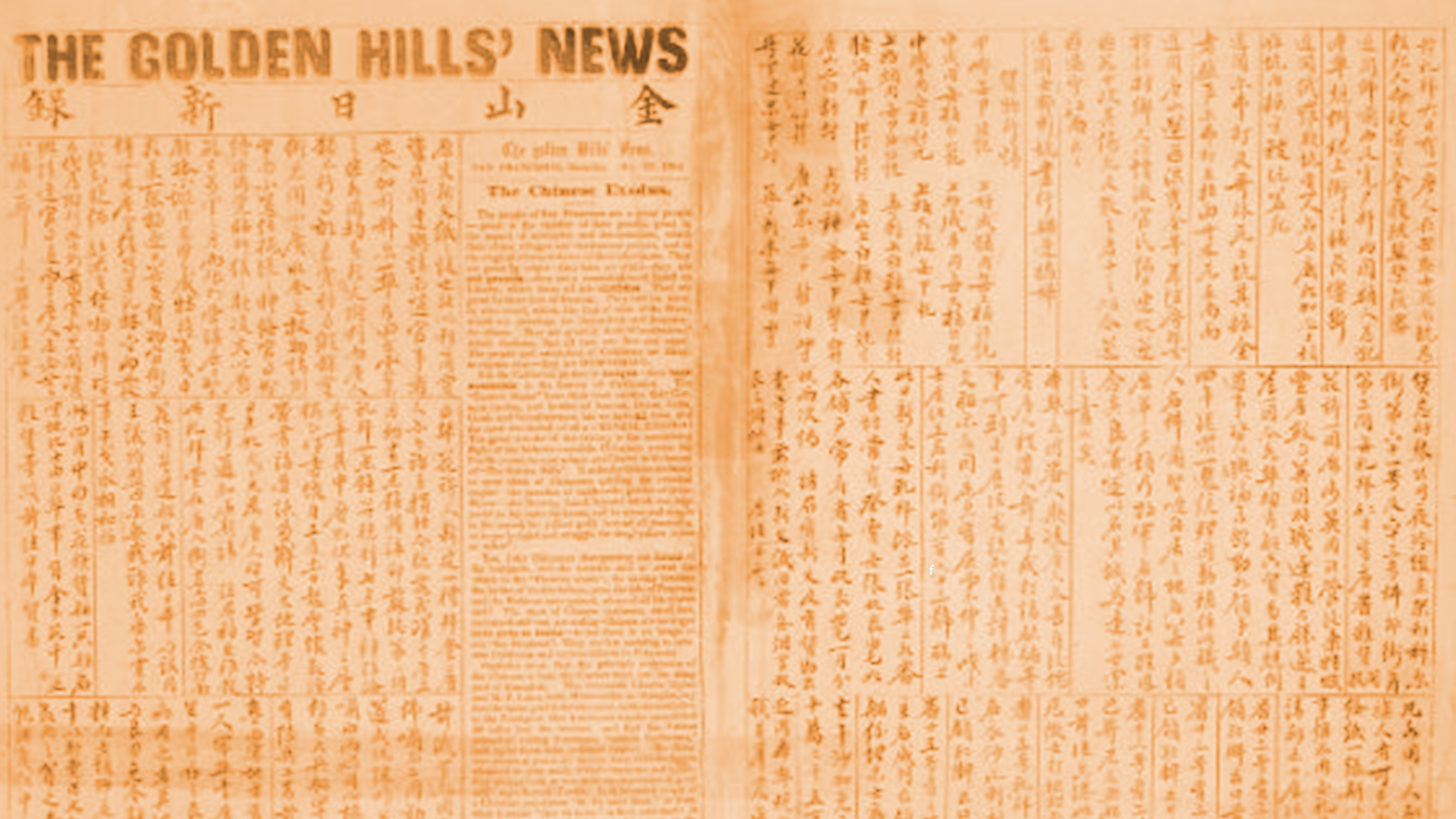 While exploring primary sources for our new Teaching California project, we came across two remarkable documents from our manuscripts collection that will soon be incorporated into our growing set of K-12 instructional materials. The first, a Spanish diary entry from California’s Mission period, and the second, a Chinese newspaper published in San Francisco shortly after the Gold Rush, both offer an insight into the daily lives of those living and working in two significant periods of California’s history.

The California Historical Society often relies on scholars in the field to illuminate new areas of collection and research. When exploring primary sources for our new Teaching California project, we came across two remarkable documents from our manuscripts collection that will soon be incorporated into our growing set of K-12 instructional materials. The first, a Spanish diary entry from California’s Mission period, and the second, a Chinese newspaper published in San Francisco shortly after the Gold Rush, both offer an insight into the daily lives of those living and working in two significant periods of California’s history. Below, we hear briefly from the two scholars who helped us translate these documents, including why these particular sources are important to them.

The first document, highlighted for fourth graders studying the Mission period, is one of many brief, daily entries by Rivera y Moncada, the Spanish military commandant of Alta California, 1774-1777. Written a few years after the second Franciscan mission and presidio in the Californias was established in present-day Monterey county, the diary includes a list of soldiers, craftsmen, and other non-native people living in California at the time. Rose Marie Beebe, Professor of Spanish based at Santa Clara University, California, undertook the translation of the 18th century Spanish-language document. She wrote about the entry’s significance: “On October 3, 1774, Fernando de Rivera y Moncada, commander of the Monterey Presidio, reported that the native peoples had started a large fire to the west of the fort. He knew what they were doing: “They set fire to the field so that new growth will sprout up from the ashes.” Yet a number of soldiers went out to extinguish the fire. They did so, Rivera wrote “to preserve the Fields.”Rivera’s remarks dramatically highlighted the different forms of food production that were present in colonial Alta California. The Spanish introduced European-style agriculture and were concerned that the crops that they had introduced into the region would not be able to grow in a charred landscape. The indigenous people, however, had lived for centuries from the food provided by the natural environment. They understood that fire was an important means of rejuvenating the soil that produced the fruits, berries, acorns, and other sustenance on which both they and the other living creatures with which they shared the California environment depended. Europeans were quickly exposed to this indigenous method of resource management. For example, Juan Rodríguez Cabrillo sailed into San Pedro Bay in 1542 and was greeted by thick fires onshore, causing him to name the place La BahIa de los Humos– the Bay of Smoke. He may well have been witnessing a series of controlled burns. As contemporary scholar M. Kat Anderson has written, “Fire was the most significant, effective, efficient, and widely employed vegetation management tool of California Indian tribes.” (M. Kat Anderson, Tending the Wild: Native American Knowledge and the Management of California’s Natural Resources (Berkeley: University of California Press, 2005), 136). Rivera’s diary demonstrated that over 200 years later, Europeans in California still did not fully understand the ecological wisdom that was an essential part of the indigenous Californians’ way of life.”Below is Beebe’s English translation of the Moncada’s diary entry:

October 1
Señor don Juan Soler: Have three fanegas1 of beans and eight of corn sent to the escolta2 at San Antonio. Because they have run out of lard and meat, send them the same amount of rations of ham given to the men here, that is, five ounces per ration. With regard to the cost [of the food] and the sacks [for transporting the food], you and the corporals can come to an agreement on that. And, if you should deem it necessary to notify me about any issue, I shall not hesitate to intervene in whatever manner is most appropriate. Monterey, October 1, 1774. Rivera

[October] 3
A large fire was set west of us. It was burning the countryside and was drawing closer to the presidio. Soldiers, young men, and even I, went out and managed to extinguish the fire, not because the homes were at risk, but rather to preserve the fields. The gentiles3 have a bad habit of creating this kind of work for us. After their seeds have all been gathered and because they have no animals to take care of, their main concern is their bellies. They set fire to the fields so that new growth will sprout up from the ashes. It is also a way to catch rabbits  that are trying to escape from the dense smoke.

1 One fanega is equivalent to about 1.6 bushels.

2 The escort or squad of soldiers assigned to protect a missionary at a mission.

For seventh graders, Teaching California authors chose this Chinese newspaper from our collections for an inquiry set exploring San Francisco as a Site of Encounter. The front page of the May 27, 1854 edition of the Golden Hills News features both Cantonese language characters and one column of English text. The publisher’s welcome note in English reads: “Merchants, Manufacturers, Miners, and Agriculturists, come forward as friends, not scorners of the Chinese, so that they may mingle in the march of the world, and help to open America an endless vista of future commerce.”

Roland Hui, an independent historian based in San Francisco who helped with the English translation, had this to say about this special document: “The Golden Hills’ News is a very special newspaper. In the words of the famed historian Him Mark Lai, it was the first Chinese-language weekly in the world that embodied all the ingredients of a modern newspaper. And for me to play a part in sharing this treasure with a wider audience is extremely gratifying. In doing the translation, I had a fun time trying to figure out the original English names of places, people, and ships from which the Chinese versions were transliterated. The contemporary issues of the Daily Alta California helped me ascertain most of them. For those few that I could not find any reference, it will be hilarious to know how widely I missed the target.”Below is an excerpt from Hui’s English translation of the Chinese portion of the newspaper:

[Front page, Purpose of the Newspaper] The purpose of publishing a newspaper is to promote commerce, provide knowledge, convey public sentiments, and communicate government regulations. Now, California is the meeting place of people from all over the world, and various countries have published their own newspapers except the Chinese. Therefore, although there are many Chinese merchants, they lack the skills to run their businesses, have limited general knowledge, and are powerless to make decisions. They do not fully understand business conditions, and are easily manipulated by tricksters; they are ignorant of government regulations, and are bullied by those with evil intensions. It is a pity that they, despite having years of experience, are struggling in their business and facing so many obstacles. This has prompted me to start this Golden Hills’ News, and use the Chinese language to describe daily happenings about Chinese and American business and government and legal affairs. It will be published every Saturday, so that people will know what is going on. If you have business news, we can advertise it here. That way, business will flourish, knowledge will expand, public sentiments will be felt, and government regulations will be understood; and to the Chinese this is by no means a small benefit. – Mr. Howard

In this city, barbarians of different nationalities bully the Chinese too much. From now on, if a Chinese is harassed, beaten, or cheated, he can report it to Mr. Howard so an English notice can be translated and sent to all countries. Chinese do not have to suffer mistreatments in silence. Mr. Howard is located at 163 Clay Street, upstairs.

People from different countries who come to America and wish to become Americans can first go to court and take an oath. The court will issue a paper which can be renewed every two years. With that they can go to the hills to dig gold and do other things without having to pay for a license. If you wish to learn more, please visit Mr. Howard upstairs for a more detailed discussion.

Our Teaching California collections team has been busy researching and preparing documents like these over the past year, including working with our partners at the California History-Social Science Project to carefully incorporate over 60 primary sources from our collections into the project’s instructional materials.Excitingly, we are creating newly-digitized copies of these primary sources for inclusion in Teaching California, and teachers will find these documents and more when we launch the project website later this year (more details to come). In the meantime, visit teachingcalifornia.org for more details about the project, and follow along here on our blog for more updates.We look forward to uncovering more stories as we dig deeper into the primary sources in our collections!—The California Historical Society is working in partnership with the California History-Social Science Project (CHSSP) at UC Davis to establish and implement Teaching California: a free and expansive online set of instructional materials to support the State’s new K-12 History-Social Science Framework. This post comes from Kerri Young, Teaching California Project Manager. You can reach out to her at kyoung@calhist.org.