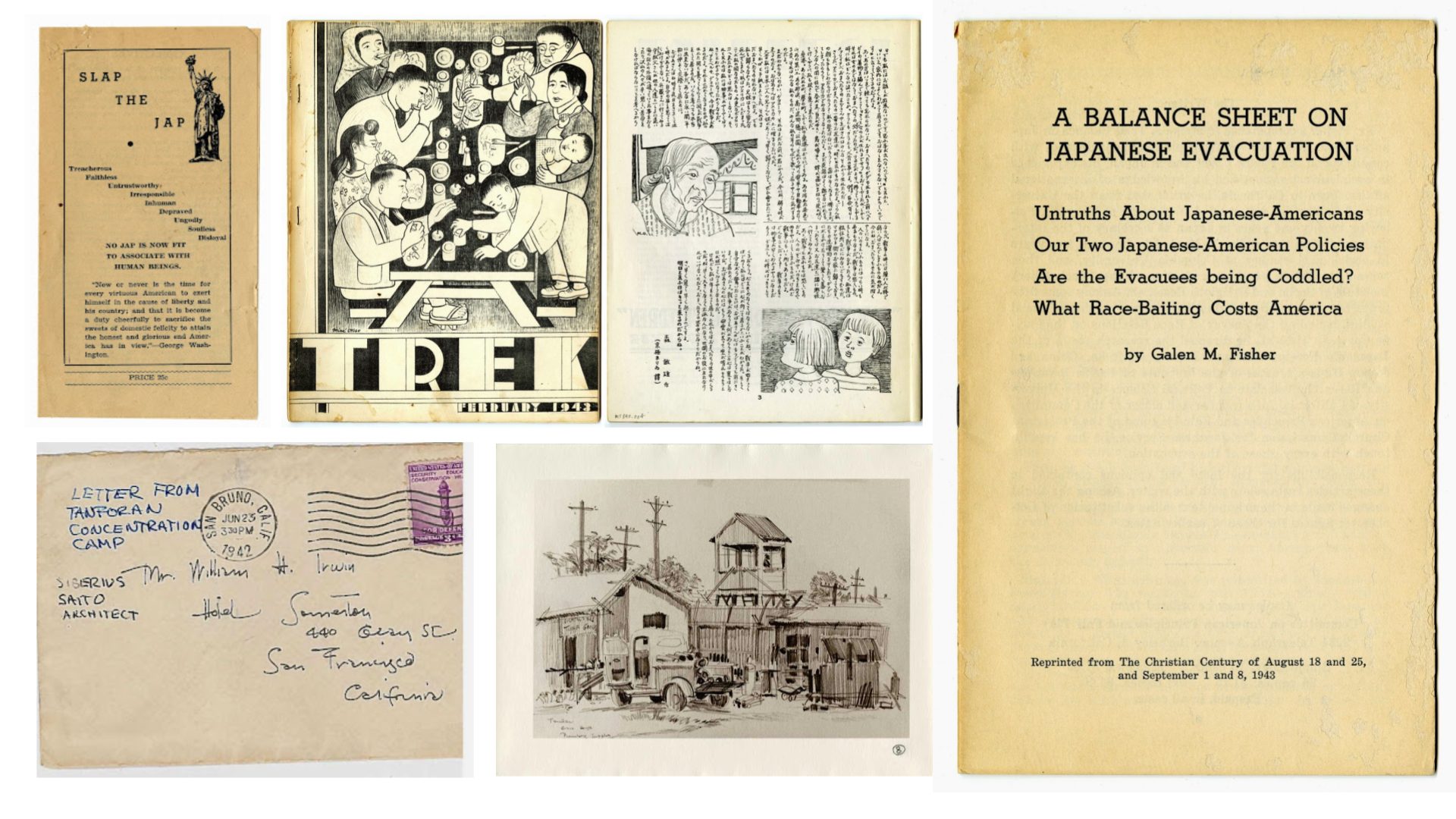 This blog post is the first in a series recalling the forced relocation and imprisonment of Americans of Japanese descent during World War II. Watch for additional posts leading up to CHS’s commemoration of the 75th anniversary of Executive Order 9066, which authorized the establishment of military zones from which U.S. residents could be excluded.

In April 1942, eight thousand persons of Japanese descent living in the Bay Area were forcibly removed from their homes and transported to the Tanforan Assembly Center in San Bruno, California. Here, at the site of the Tanforan Race Track, they lived in horse stable stalls or in barracks or on grandstands awaiting relocation to more permanent facilities.

Siberius Y. Saito was one of the eight thousand. His illustration of a guard in a watch tower at Tanforan is part of CHS’s Collections documenting the internment of nearly 120,000 Japanese Americans during World War II. Two-thirds of those interned were U.S. citizens. As we prepare to commemorate the 75th anniversary, on February 19, 2017, of Executive Order 9066 setting the stage for internment, we highlight examples from the Collections.

Saito’s drawing illustrates the hastily constructed detention complex at Tanforan, one of eighteen centers where persons of Japanese ancestry living along the Pacific Coast were held temporarily before their transfer to camps in the West’s interior, most of them for the duration of the war. The camps serve as an example of an issue confronting post-9/11 America today: the conflict between national security during wartime and the equal rights and due process guaranteed by our Constitution.

The drawing–one of twenty-four copy prints by Saito in the Collections—is in stark contrast to the publicized photographic record of the day. Those images give no hint of the barbed wire and armed manned towers that imprisoned camp residents or the humiliating living conditions in which they lived.   As Saito described in a letter to a friend, “Poor ventilation, dirty and grimy, smell of manure from underfloor area, dampness; these are some of the conditions that occur out in our ‘skid row.’”
A “Slap the Jap” pamphlet illustrates the wartime hostility toward the Japanese in California, especially in the farming areas–even when the war ended and upon the internees’ release from imprisonment. The brochure, produced by the Sacramento Home Front Commandos, asked: “Do you want them back in your back yard . . . to poison your water, kill your cattle, destroy your orchards?”
Still, others denounced the relocations and publicly expressed sympathy with the internees. In this printed message to their Japanese neighbors, the Reedley Committee on National Security and Fair Play in the San Joaquin Valley expressed “friendship for you and our belief in you as neighbors and fellow Americans. . . . Many of us know many of you personally, and are confident of your loyalty to the United States.”

Even before Pearl Harbor, some Californians objected to rising anti-Japanese sentiment throughout the state. In 1941, Galen Merriam Fisher, who taught at the Pacific School of Religion, organized the Fair Play Committee for the Citizens and Aliens of Japanese Ancestry in order to protect the rights of Californians of Japanese descent. Galen’s articles were widely read and were produced by the committee, including this “Balance Sheet on Japanese Evacuation,” which pitted the military success of the evacuations against their “social failure.”

But the loudest voices remain those of the internees themselves who, even as they were imprisoned and silenced at remote inland camps, created art, crafts, and publications—including the quarterly literary magazine TREK produced at the Topaz War Relocation Center in Utah—as a means of creative expression and bearing witness to the injustices they suffered.

Their voices are still heard today: in annual pilgrimages to the camp sites, in exhibitions, in oral histories, and most recently in the widespread social media protests in March and April this year against the auctioning of art and artifacts made in the camps. This latter campaign resulted in the auction’s cancellation, the artifacts’ acquisition by the Japanese American National Museum in Los Angeles, and a renewed conversation about the preservation and safeguarding of these wartime objects.