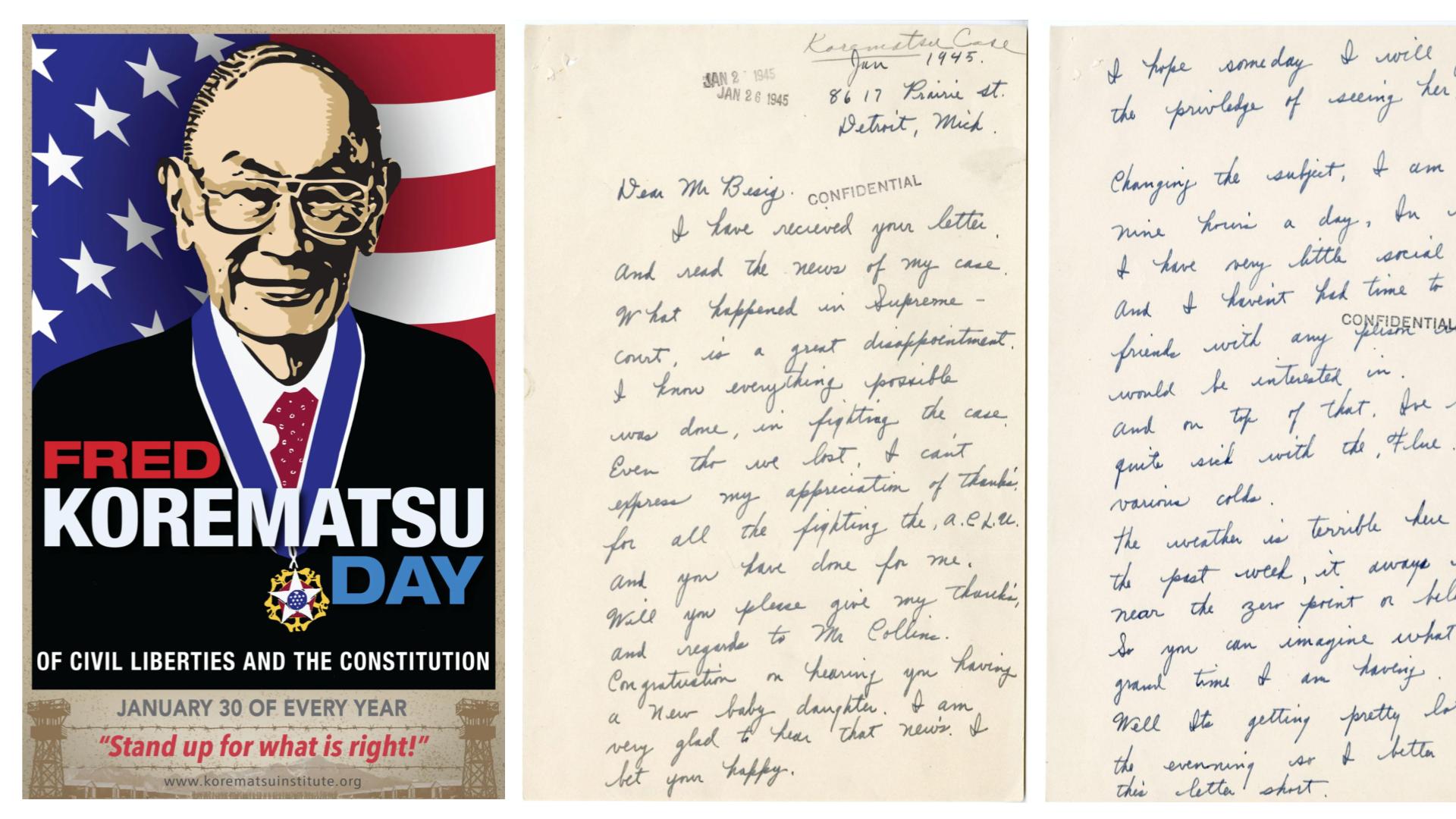 The Fred Korematsu Day of Civil Liberties and the Constitution is celebrated on January 30 in California and a growing number of additional states to commemorate the birthday of Fred Korematsu, a Japanese-American civil rights activist best known for resisting the internment of Japanese Americans. Originally published on January 30, 2016 by former CHS Strategic Initiatives Liaison Alison Moore, this post is part of a blog series about the World War II incarceration of Japanese Americans. 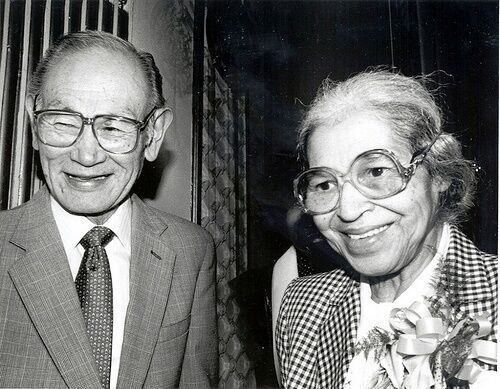 Originally published on January 30, 2016, this post is part of a blog series about the World War II incarceration of Japanese Americans. Each year on January 30 Californians celebrate the man whose name graces the Supreme Court case that challenged the government’s right to imprison citizens and residents during wartime. This year marks the sixth annual “Fred Korematsu Day of Civil Liberties and the Constitution,” honoring both the man and the landmark case, Korematsu v. the United States, part of the pantheon of civil rights cases, legislation, and individuals whose names are synonymous with efforts to maintain civil liberties afforded by the U. S. Constitution.

Fred Korematsu and Rosa Parks, 1988
Courtesy of Shirley Nakao and the Korematsu Institute

“He had a very strong will,” his lawyer Dale Minami said of Korematsu. “He was like our Rosa Parks. He took an unpopular stand at a critical point in our history.”

After the bombing of Pearl Harbor in 1941, the federal government enacted Executive Order 9066, which led to the imprisonment of 120,000 residents and citizens of Japanese descent living on the West Coast. All of those individuals forced to leave homes and businesses were housed for the duration of the war in what was termed Relocation Centers or internment camps, located in desolate places scattered mainly throughout the West. At the time the order was issued, Fred Korematsu, a native of Oakland whose family owned a local nursery, was working as a ship welder.

While the rest of his family followed the government decree, Korematsu, who was in a relationship with a Caucasian woman and did not want to be separated from her, changed his physical appearance and sought to maintain his freedom. After evading authorities for two months, he was arrested and jailed prior to being transported to join his family at the Topaz War Relocation Center in Delta, Utah.

While in jail before departing for Utah, Korematsu was visited by Ernest Besig, head of the Northern California chapter of the American Civil Liberties Union, who asked if Korematsu would like to become part of a suit aimed at challenging the government’s order. At the time, Besig was also defying orders—those of the national chapter of the ACLU—which had chosen not to question the government’s order. Korematsu agreed to join the suit and was represented by ACLU attorney Wayne Collins.

Despite the efforts of Mr. Collins and the ACLU, in 1944 the U.S. Supreme Court ruled that the government did, in fact, have the right, based on reasonable concerns for national security, to imprison U.S. citizens and residents en masse, absent evidence of any crime. As the January 1945 letter from the collection of the ACLU of Northern California at the California Historical Society illustrates, Korematsu was resigned to accept the loss and move on with his life: 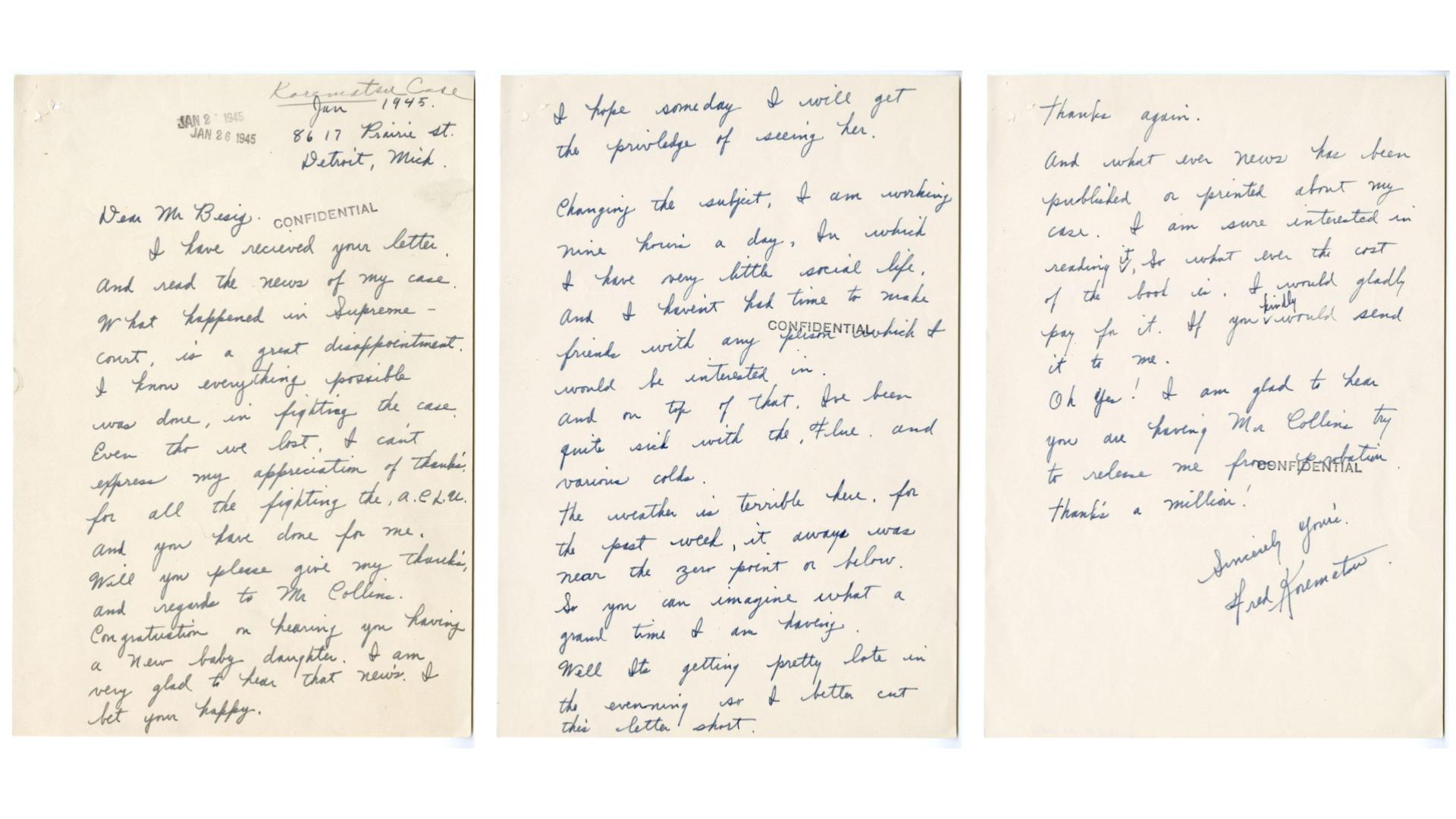 For many years Korematsu, like other interned Japanese Americans, kept silent about his time at Topaz as well as his Supreme Court case. His daughter, Karen, didn’t know about her father’s case until a high school classmate mentioned it in school. But in the early 1980s, Peter Irons, a professor at the University of California, San Diego, discovered evidence that Charles Fahy, the Solicitor General who argued Korematsu v. United States for the government, had concealed military documents stating that Japanese Americans did not, in fact, pose a threat to national security.

Irons assembled a team of young, mostly Japanese American attorneys, headed by Dale Minami, who appealed Korematsu’s conviction based on the government’s false statements to the Court. On November 10, 1983, the U.S. District Court in San Francisco formally vacated Korematsu’s conviction—although the Supreme Court ruling was unaffected.

Partly owing to the momentum created by the Korematsu case, and in recognition of the harm caused to all citizens interned during World War II, in 1988 Congress passed the Civil Liberties Act. The legislation awarded $20,000 to each individual internee or their heirs as partial reparation for businesses, homes, and property lost as a result of the mandates of Executive Order 9066, as well as to acknowledge the overall injustice done to American citizens. The language of the act noted that the government’s actions were based on “race prejudice, war hysteria, and a failure of political leadership.” 82, 219 individuals received payment and letters of apology.

In 1998 President Bill Clinton awarded Korematsu the Presidential Medal of Freedom and noted that, “In the long history of our country’s constant search for justice, some names of ordinary citizens stand for millions of souls. Plessy, Brown, Parks . . . to that distinguished list . . . we add the name of Fred Korematsu.”

Unlike the years after the war when many former incarcerees were reluctant to call attention to the government’s shameful actions, Korematsu became an outspoken advocate for civil liberties, participating in, among other things, two amicus curiae (“friend of the court”) briefs urging the federal government not to restrict the civil rights of citizens of Middle Eastern descent following the attacks of September 11, 2001.

“One person can make a difference, even if it takes forty years.”

In a 2004 statement that calls to mind recent comments by politicians and candidates in the 2016 presidential race, Korematsu said: “No one should ever be locked away simply because they share the same race, ethnicity, or religion as a spy or terrorist. If that principle was not learned from the internment of Japanese Americans, then these are very dangerous times for our democracy.”

In that same year, Justice Sandra Day O’Connor, writing in the majority opinion ruling that prisoners seized as part of the “war on terror” have the right to challenge their detention, noted that, “A state of war is not a blank check for the President when it comes to the rights of American citizens.”

Before his death in 2005, Korematsu urged those in America whose civil rights are in danger of being abrogated not to be afraid to speak up, noting, “One person can make a difference, even if it takes forty years.”

The following is a partial list of places, organizations, and awards named for Korematsu:

For more information, watch this video from UNITY Lab & Vignettes:

Alison Moore, This Day in History: August 10—The U.S. Rights a Wrong,

Read more from our blog series about the World War II incarceration of Japanese Americans:

This Day in History: The Bombing of Pearl Harbor—Defending the Country, Confronting Fears