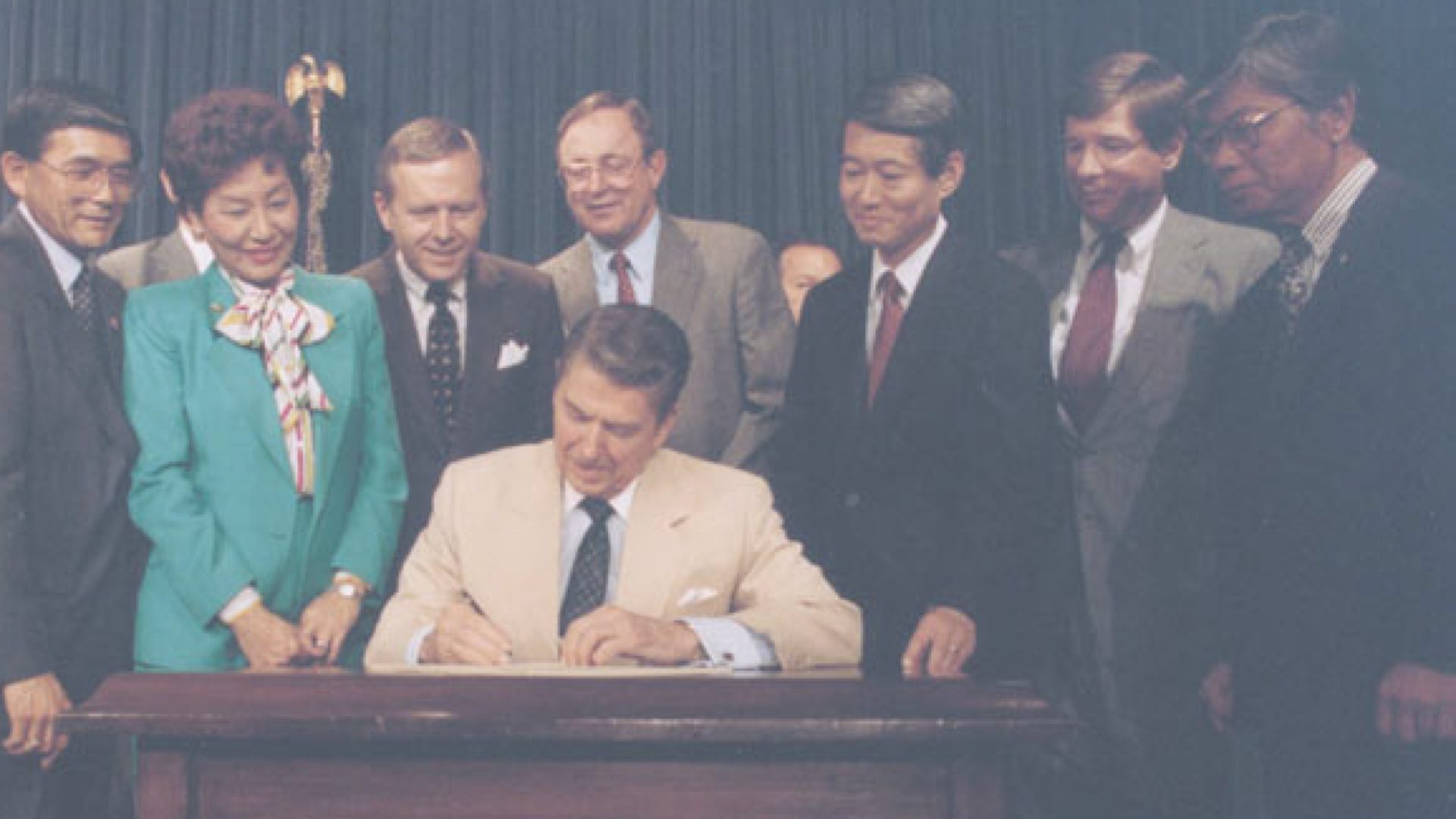 This blog post is part of a series recalling the forced relocation and imprisonment of Americans of Japanese descent during World War II. Watch for additional posts leading up to CHS’s commemoration of the 75th anniversary of Executive Order 9066, which authorized the establishment of military zones from which U.S. residents could be excluded.

On August 10, 1988, President Ronald Reagan signed into law the Civil Liberties Act which issued a formal apology and a sum of $20,000, to every American of Japanese ancestry imprisoned in “relocation” camps during World War II.  “Here we admit a wrong,” said President Reagan in his accompanying remarks, “Here we affirm our commitment as a nation to equal justice under the law.”

Forty Six years earlier, on February 19, 1942, ten weeks after the bombing of Pearl Harbor, President Franklin D. Roosevelt issued Executive Order 9066 which authorized the U.S. to bar individuals from prescribed military areas – and ultimately to remove 120,000 people of Japanese ancestry from the West Coast for the duration of the war.

On Terminal Island near Los Angeles “word spread quickly,” writes author and community leader Bill Hosokawa, “and human vultures in the guise of used furniture dealers descended on the island. They drove up and down the streets in trucks offering $5 for a nearly new washing machine, $10 for refrigerators … and the Japanese, angry but helpless, sold their dearly purchased possessions because they didn’t know what to do.”

In Berkeley, University of California professor and respected artist Chiura Obata closed his studio on Telegraph Ave., selling many works of art at a loss. While the family packed household possessions Obata began work on a large painting, titled “Struggle,” which showed a tree encircled by a swirling storm.  A description of the painting written later for exhibition described Obata’s feelings about the times:  “In war there is the struggle of battle, but more important to humanity there is also the struggle against the hatreds of war.”

At war’s end, the camps were closed and people returned to houses and farms occupied by squatters or in terrible states of disrepair. Discrimination was common. For many the experience in the camps was seldom spoken of as people worked to rebuild their lives. But beginning in the 1970s, the Japanese American Citizen’s League, an organization formed in 1929 to expand the citizenship rights of Japanese Americans, began a movement for redress for the injustices and economic losses suffered during internment.

In 1980, primarily through the efforts of the JACL and key Japanese American legislators, Congress created the Commission on Wartime Relocation and Internment of Civilians. Eight years later, the report by the Commission, titled Personal Justice Denied, determined that civil liberties had been violated. The Civil Liberties Act grew out of the report, and in 1990 the first checks were handed to formerly imprisoned citizens.

In the Bay Area, Janet Daijogo, a native San Franciscan interned as a child,  phoned her mother to hear her reaction to the receipt of the reparation check. “I asked her how that was, [and] she said, ‘Nothing can pay for the humiliation that we endured,’  and she began to cry…which was only the second time in my life I had ever witnessed my mother crying.”

When asked which was more important, the check or the official apology, Daijogo replied,  “…the apology… I think [the check] was a token because nothing can really repay three years of people’s lives …  I think that it was really the apology, and the acknowledgement that this was an unconstitutional, outrageous way to treat a citizen – on the basis of their race.”

The process of seeking redress became a catalyst for the Japanese American community to express anger kept silent for years. For many of the first generation citizens, the Issei, reparations came too late. But for the second generation Nisei, redress offered a new beginning.  Author Delphine Hirasuna notes that what followed reparations  signaled a “change in demeanor and attitude among the Nisei [that] was palpable … a community healing itself.”

Ta-Nehisi Coates, author of the 2014 The Atlantic magazine article, “The Case for Reparations,” writes,  “I believe that wrestling publicly with these questions matters as much as—if not more than—the specific answers that might be produced. An America that asks what it owes its most vulnerable citizens is improved and humane. An America that looks away is ignoring not just the sins of the past but the sins of the present and the certain sins of the future.”