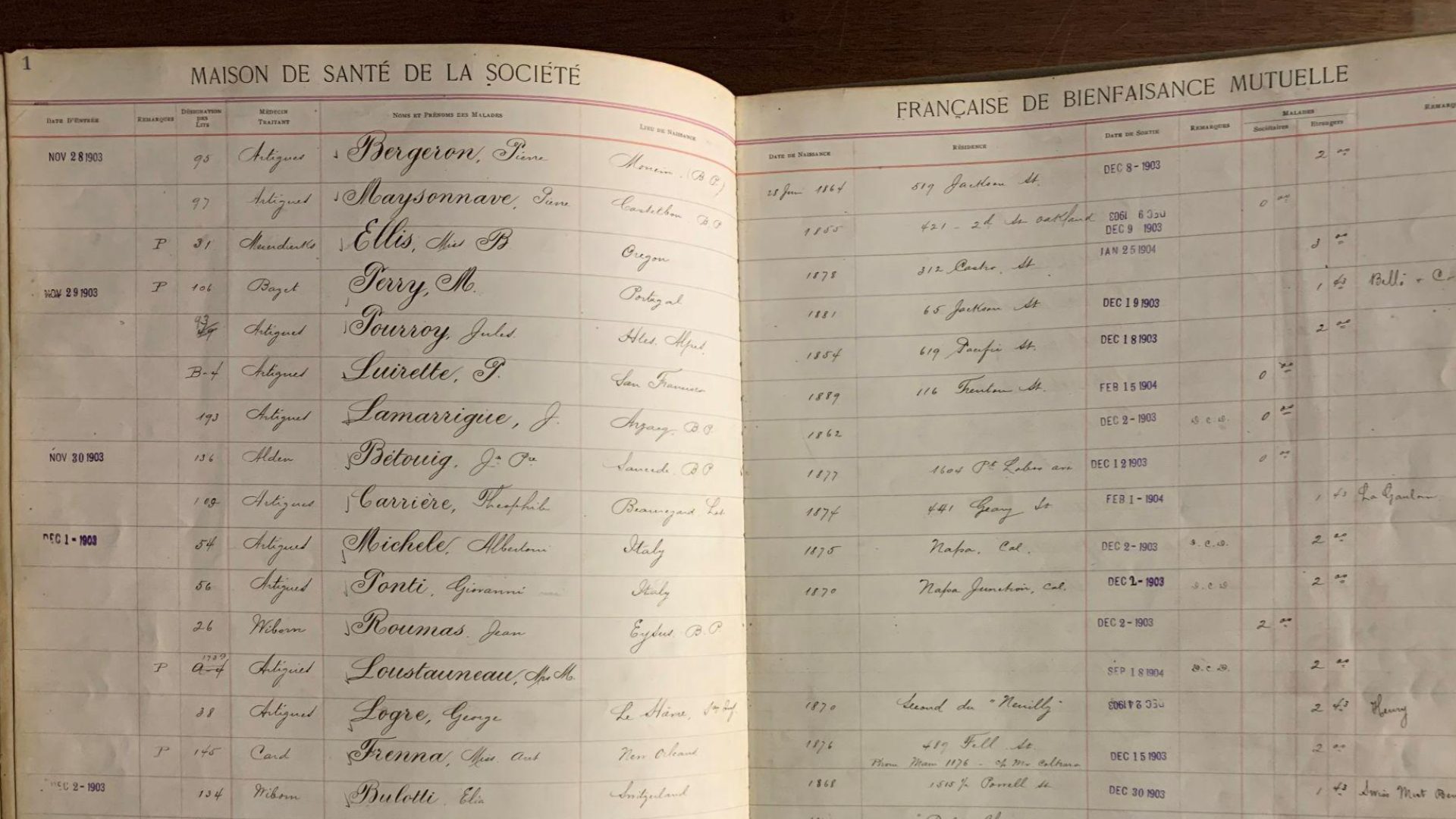 This July we celebrate French American Heritage Month with a feature on the “La Société Française de Bienfaisance Mutuelle” or French Mutual Benevolent Society, and the French Hospital in San Francisco.

When gold was discovered near Coloma, California, the lure of adventure and fantastic wealth drew people from all over the world. In France, the first mention of the Gold Rush came via a press notice in November 1848, that “mineral deposits of great value have been discovered . . . fabulous riches awaiting only the hand of the miners to be picked up.”1

At the time, France was in the midst of political, civil, and economic upheaval, so it is understandable that many considered leaving their home country to try their luck in California. But this instance was unusual in that the government helped send its citizens abroad. In 1850, France announced that it would hold a national lottery, known as the Lottery of the Golden Ingots, and use the money raised to send five thousand people to California. Was this an attempt to help its people escape poverty? Or was it an attempt by France to rid the country of those that opposed the French government, literally paying for them to move far away in the hope “that most or all of them would never return.” 2

Whatever the reason, between the lottery and those choosing to emigrate on their own dime, it is estimated that thirty thousand French citizens arrived in California early on in the Gold Rush, with some settling in San Francisco, others in camps and towns farther afield.3 These new immigrants started French newspapers; opened restaurants, such as the well-known Poodle Dog, considered one of the top restaurants in San Francisco in its day; and influenced the design of the city, as with the four-story rotunda and stained glass dome in what is now Neiman Marcus Union Square, originally part of the City of Paris department store which was founded by Felix Verdier in 1850.

In 1851, the French population in California had grown enough that they were able to form “La Société Française de Bienfaisance Mutuelle,” or French Mutual Benevolent Society, to provide assistance to French residents in need of support. From this idea of mutual aid the French Hospital was created, its objectives stated in its by-laws:

“To provide for the needs of the sick, furnish assistance to Frenchmen as well as to citizens of other nationalities without resources, and to take care of their funeral expenses.”4

The hospital’s location changed as it grew in size and reputation; by 1895 it had moved into a newly constructed building on Geary Boulevard—hailed as the most modern facility on the Pacific Coast—equipped with 170 beds, a nursing school, and more.

CHS is fortunate to have an incredible artifact documenting the French Mutual Benevolent Society’s contribution to the City of San Francisco: a logbook used by the French Hospital from 1903 to 1908.

The logbook in the collections of the California Historical Society meticulously documents the name, birthdate, and birthplace of each patient, along with the date they were admitted and discharged, and the name of the attending doctor. The diversity of the city is reflected in the carefully handwritten entries, which document not just French patients but those from Portugal, Switzerland, Italy, the Azores, and far-flung parts of the United States.

Of particular interest is the page for April 18, 1906, with the bold headline “Tremblement de Terre et Incendie.” It was the day of the 1906 San Francisco Earthquake and Fire. The disaster damaged or destroyed many of the city’s medical facilities, which may account for the fact that no patients are listed in the arrivals section for that day. Within five days, however, the entries restart, signaling that the French Hospital had continued its goal of caring for the residents of the city.