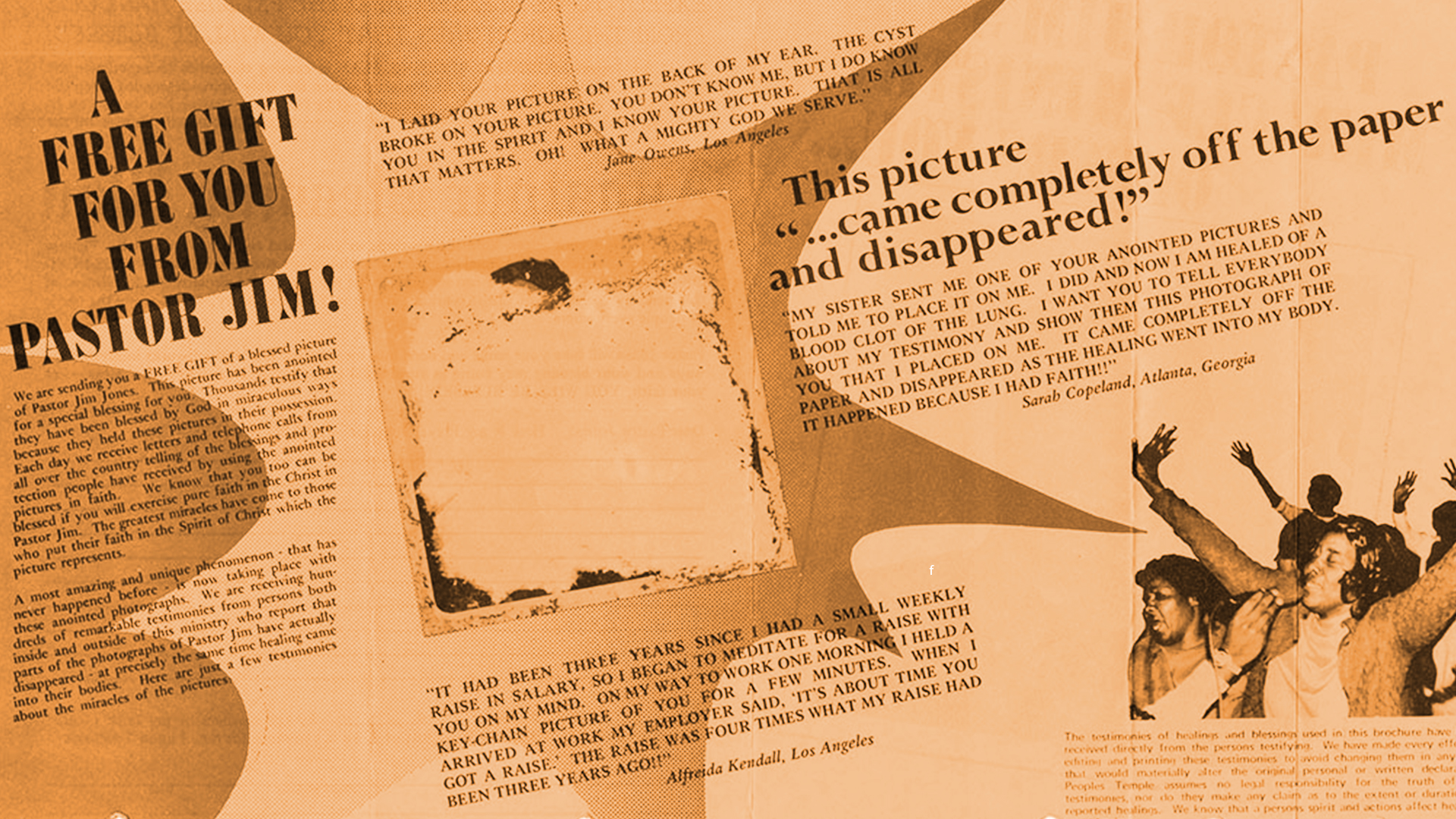 The Disappearing Photos of Peoples Temple

Among our collection of Peoples Temple Publicity Department materials is a group of ruined photographs – some faded completely to white, others thickly scattered with flaking pigment, a few recognizable but chemically streaked and melted. These photos are relics of the Temple’s practice of faith healing. It’s well known that Jim Jones’ flamboyant “healings” were at the center of Temple culture, drawing crowds to services and converting many curious visitors into serious believers. Less well understood, however, is the fact that Peoples Temple offered the service through the mail.

Among our collection of Peoples Temple Publicity Department materials is a group of ruined photographs – some faded completely to white, others thickly scattered with flaking pigment, a few recognizable but chemically streaked and melted. These photos are relics of the Temple’s practice of faith healing. It’s well known that Jim Jones’ flamboyant “healings” were at the center of Temple culture, drawing crowds to services and converting many curious visitors into serious believers. Less well understood, however, is the fact that Peoples Temple offered the service through the mail.

This is hard to imagine in today’s connected world, but the Temple was many things to many people, depending on whether you attended services, when you joined, and whether your primary interaction was through the Peoples Temple mailing list. Without much opportunity for members to compare stories, Jones could present his organization to different people as a leftist utopian movement, a mainstream Christian church, an anti-Christian church whose pastor mocked the Scriptures and claimed to be the only God his followers needed, an ecstatic Pentecostal-style revival, or a low-key prosperity gospel ministry.

It was the latter that dominated the mailing list, which sent out a beautifully designed monthly newsletter. This mailer would usually include a donation request, and often also a small relic – a piece of Jones’ robe, a flask of holy oil, an anointed penny – which was said to give the recipient luck, or send material rewards their way. CHS’s “disappearing photos” of Jones were included with the mailer in August 1974. Believers would place the images on affected parts of their body and watch the images vanish as a sensation of healing washed over them. In reality, the photos had been intentionally developed so that they would fade on exposure to light – but the effect, to a sick and desperate person, must have held great emotional power.

The mailer itself stops just short of claiming that the photos could heal, or even of telling the recipient how to use them (in this way, the Temple avoided outright mail fraud). It does, however, include a number of testimonies which explicitly explain that when the image was touched to a sick or injured body, the image disappeared and the body was healed. The testimonies provided both verisimilitude and deniability for the Temple.

We have no way of knowing how many photos were kept as personal mementoes, how many were discarded after they appeared to work (or not work), and how many were ignored, but we do know that many of the used photos were sent back to the Temple. Some were accompanied by brief testimonial letters, others only by notes scribbled on the envelopes, and others arrived with no writing at all, just a blank and silent image.

Today, the photos convey a strange sort of emptiness. Unlike most photos, they were never important for the images they carried, but for their power as objects. Ephemeral things are always emotionally powerful; think of the autumn leaf, or cherry blossom, that makes us feel both melancholy and buoyant. In the case of the photos, their creators designed them to self-destruct in order to give them a feeling of holiness. Now, however, that emotional power is spent. These empty sheets of photographic paper have no meaning left at all.

This leaves an archivist with a question. Do we hold on to these items? If objects from the past don’t speak, do they have a place in the library? Most people assume that an archivist’s job is to hold on to everything from the past, to take care of the past so that other people don’t have to think about it. (Witness the way the word “archive” is used in email and project management software – essentially, to mean “send this to a place that I’ll never see, but don’t delete it.”) In reality, archivists let things go all the time – and usually because they don’t bear information. Why would a librarian maintain a blank book?

The question isn’t quite as simple here, of course. These photos are more comparable to a large collection of empty, mass-produced blank books, like unused diaries. They’re poignant, but in ways that we may think we understand better than we do (we don’t know why the people in my example bought diaries, or why they never used them). There’s always a danger, in reading history, of filling in your own emotional context when there is none to be had.

In the end, we discarded many of the photos. We kept a substantial number of them, both to testify to their emotional resonance with Temple members and to preserve the information that some of them had written on their backs. But when it comes to conveying the vanishing of meaning, we’ve found that twenty blank pieces of paper are as powerful as a hundred.