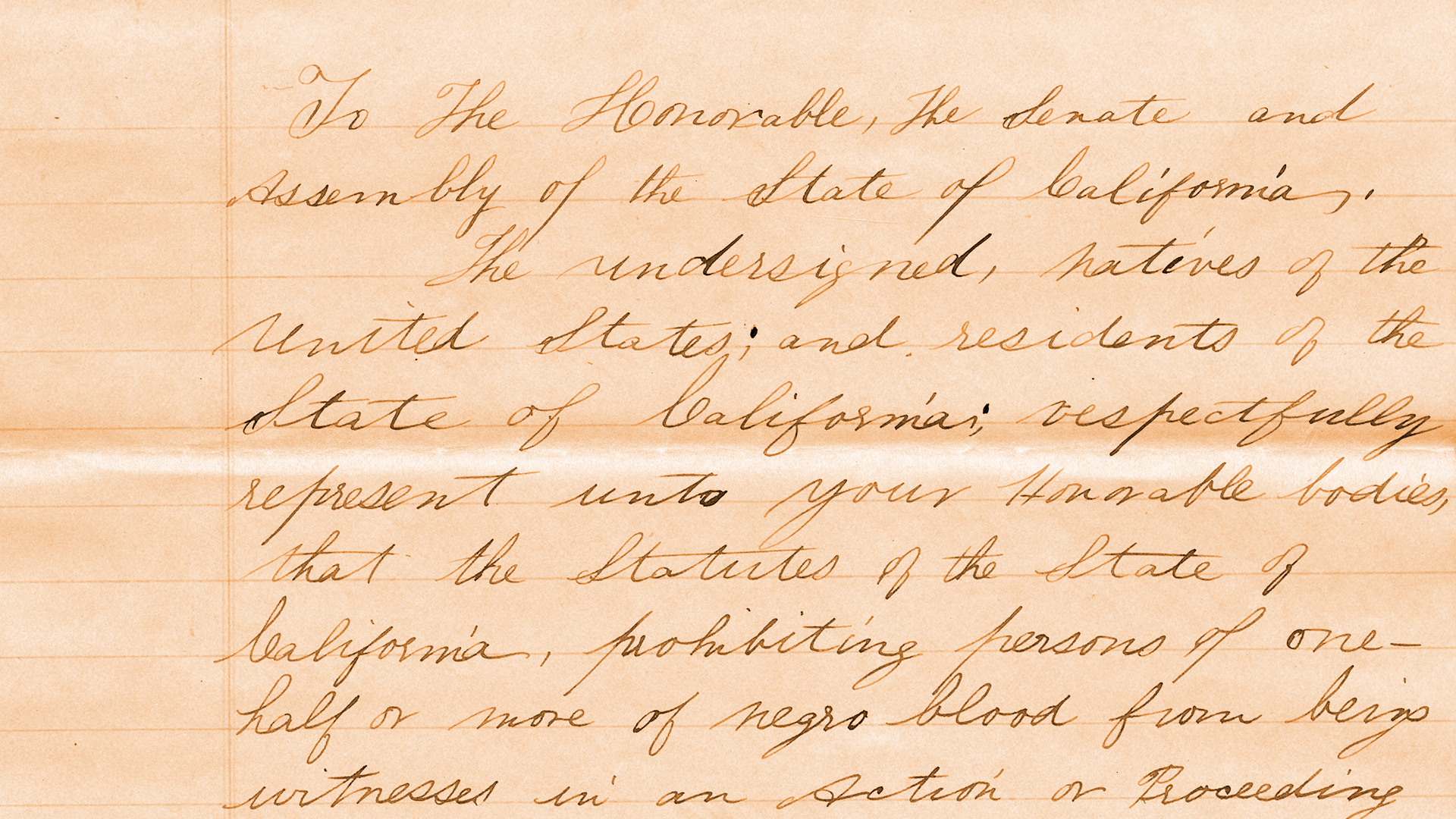 This short blog explores the Petition for legal recognition of Black Californians and three conventions held by the Colored Citizens of the State of California in 1855, 1856, and 1857. The petition was recently made accessible through the CHS digital library. Read on!

“Judges and Jurors ought to be allowed to judge of the weight which should be given to evidence of colored persons, and that they should be as capable of determining whether a black man is speaking the truth, as a white man.”

—Petition for legal recognition of Black Californians, circa 1852-1862

This three-page petition—addressed to the Senate and Assembly of the State of California—speaks to the long campaign by abolitionists, activists, church leaders, and others working together to repeal the California state law that prohibited African Americans from testifying or acting as witnesses in court cases involving white persons. According to the law, passed in April 1851, “persons having one-half or more of negro blood, shall not be witnesses in an action or proceeding, to which a white person is a party.”[1]

The goal of ending this racist law was clearly stated at three conventions held by the Colored Citizens of the State of California in 1855, 1856, and 1857. The proceedings of the first convention, held in Sacramento over three days in November and attended by forty-nine delegates representing ten counties, began:

“In obedience to call, a Convention of the colored people of the State of California, by their delegates, assembled at Sacramento, in the colored Methodist Church, on Tuesday, Nov. 20th, for the purpose of taking into consideration the propriety of petitioning the Legislature of California, for a change in the law relating to the testimony of colored people, in the Courts of justice of this State. Also. to adopt plans for the general improvement of their condition throughout the State.”

The Second Annual Convention took place in December 1856. By this point the number of delegates had increased to sixty-one, with seventeen counties represented. The President’s opening remarks made clear the difficult task that lay ahead:

“Gentlemen, the occasion which has brought us together is one of great importance. The object we seek, equal testimony in the courts of this State, is deserving of our most earnest effort…We are not without many enemies who would rejoice confusion and division in our midst, but let us enter upon our deliberations in a spirit of kindness and conciliation. If there ever was a people among whom union was necessary; union of purpose, of spirit, and action for the sake of success, then it is necessary to us.”

It was not until the last convention, held in October 1865, that the President, F. G. Barbadoes of San Francisco, was able to stand before the delegates gathered and finally announce success in repealing the law:

“For the fourth time the colored citizens of this State are assembled in Convention for the purpose of obtaining JUSTICE, and the consideration of subjects tending to our general elevation. The principal object which created the preceding conventions, was the admission of our testimony in the courts of justice in this State. This has been happily accomplished by our untiring efforts, and the generous and noble co-operation of the friends of justice in the Legislature. After a struggle of eight years, and in January, in the year of 1863, the statutes of California were cleansed from that foul blot which had entirely obliterated from their face Equity and Justice.”

To view the Petition for legal recognition of Black Californians in the California Historical Society’s collection, click here to go to our digital library