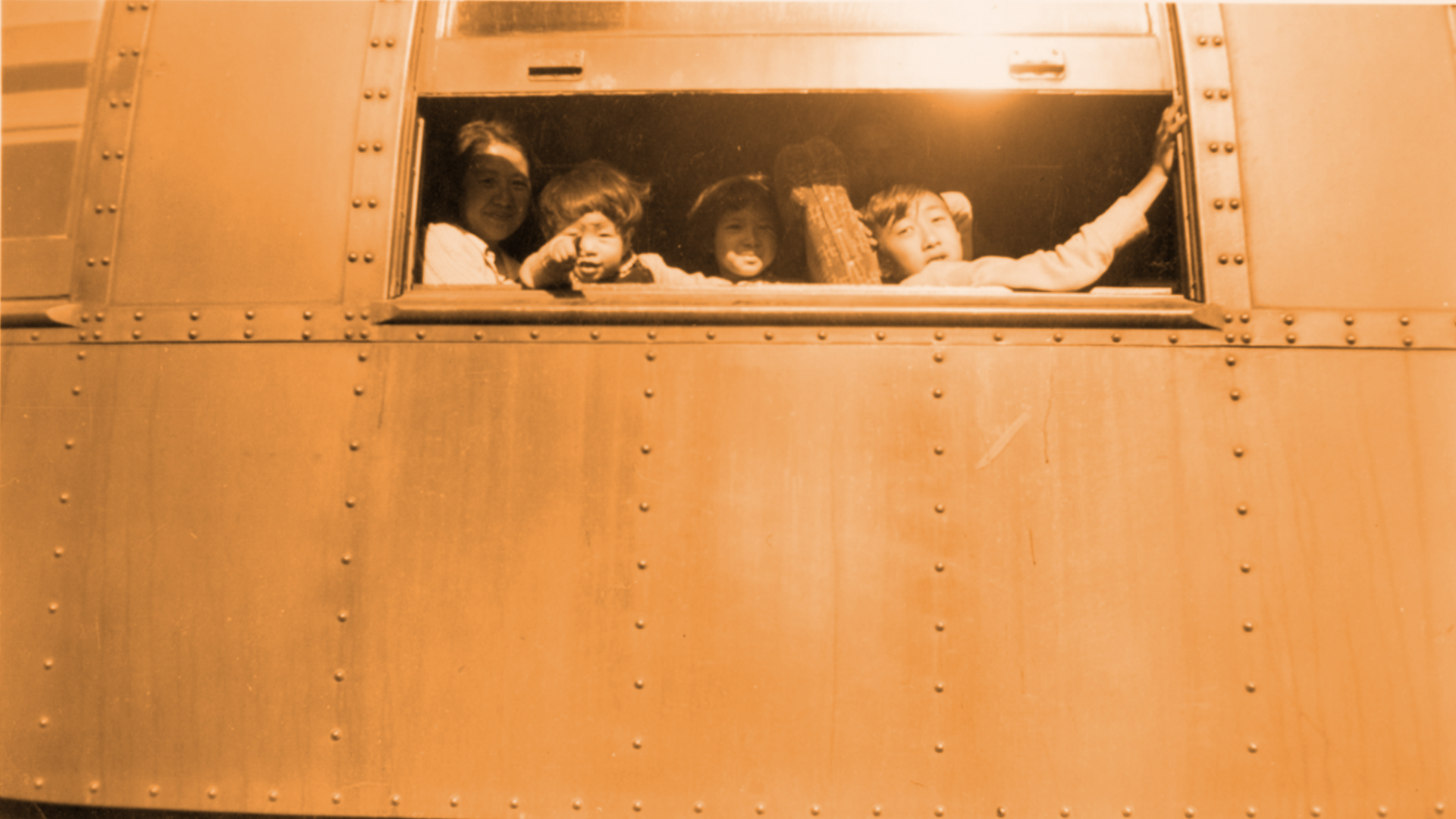 By Katie Peeler and Al Bersch

On February 19, 1942, President Franklin D. Roosevelt signed and issued Executive Order 9066. On the anniversary of that day seventy-nine years later, we reflect on what the order meant for Japanese Americans and introduce newly digitized collections that tell their stories.

On February 19, 1942, President Franklin D. Roosevelt signed and issued Executive Order 9066. Under the guise of national self-defense and to protect the country against espionage and sabotage, the order authorized the U.S. secretary of war to prescribe certain areas within the United States as military zones “from which any or all persons may be excluded.1” A month later on March 21, 1942, Congress passed Public Law 77-503 which rendered the order enforceable by criminalizing the violation of restrictions created by EO 9066. These acts provided legal basis for the forced removal and incarceration of Japanese Americans (as well as some German Americans and Italian Americans) from the West Coast.

Anti-Japanese sentiment in the U.S. had intensified following the attack on Pearl Harbor in December 1941. Shortly after, President Roosevelt declared Japanese, German, and Italian citizens “alien enemies2” and framed them as potentially disloyal. Roosevelt commissioned the Munson Report, an intelligence report on Japanese Americans on the West Coast, yet followed through with the executive order even after the report concluded that Japanese Americans were loyal and did not pose a threat. J. Edgar Hoover, FBI director during the time, also opposed the order, stating that it was based on “public and political pressure rather than factual data.2”

Over the next six months, approximately 120,000 individuals, mostly American citizens, from California, Oregon, Washington, and Arizona were forcefully relocated inland – without a trial or due process – to ten internment camps across the American West. They were stripped of their civil liberties and many lost all material property and assets as it was sold, confiscated, or destroyed in storage. Individuals and families were forced to live in cramped conditions in uninsulated buildings during hot summers and harsh winters. Those incarcerated were isolated from society by barbed wire, armed guards in towers, and stretches of surrounding wilderness for an average period of two to four years.

Fliers like the one below were posted to announce the forced removal of people of Japanese ancestry. Along with instructions regarding when and where to assemble, the flyers include information on what those facing removal were allowed or prohibited from bringing along with them. Most families had to leave their homes with short notice, without any idea of when they would be allowed to return. 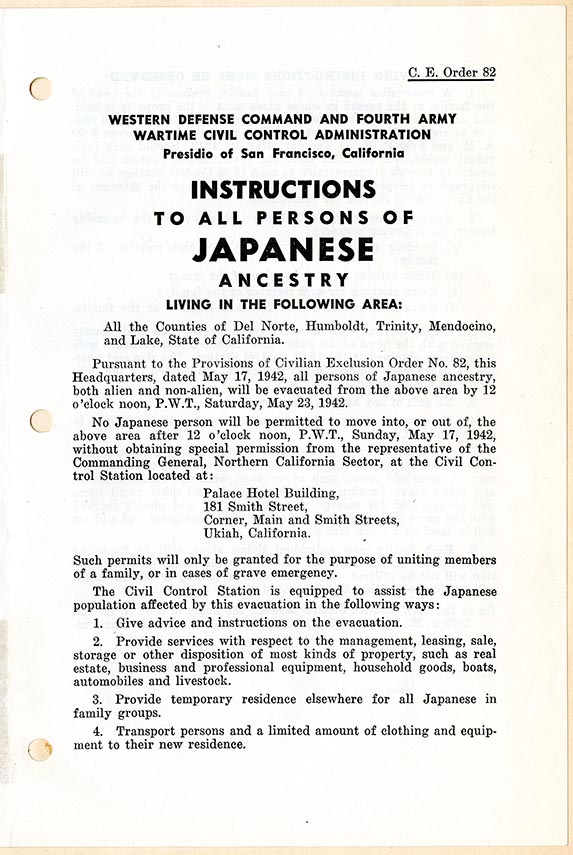 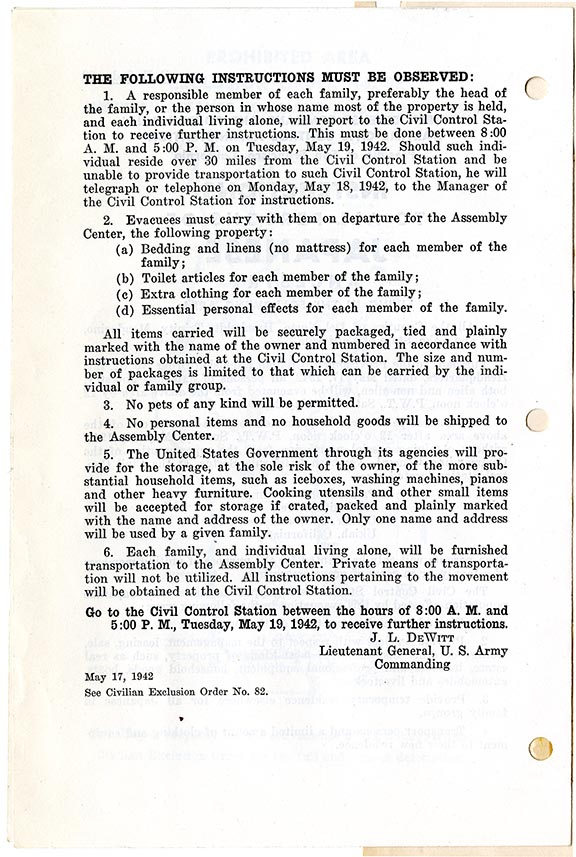 Several individuals resisted the order and brought legal challenges which made it all the way to the Supreme Court. One such challenge came from Fred Korematsu, a 23-year-old welder born to Japanese immigrant parents in Oakland, California. In May 1942, Korematsu resisted the civilian exclusion order and refused to report to Tanforan Assembly Center with the rest of his family.  He attempted to disguise his identity by undergoing minor plastic surgery and taking a new name but was ultimately arrested for refusal to comply with the evacuation order3.

Korematsu was represented by the American Civil Liberties Union of Northern California as a test case to challenge the constitutionality of Executive Order 9066. The case files for his challenge provide insight into the legal strategies used as well as to Korematsu’s experience throughout the war. Notably, the national ACLU office, headed by Roger Baldwin Nash, opposed the San Francisco chapter’s decision to focus on the constitutionality of the executive order in the Korematsu case. The case files include correspondence documenting this split, as well as personal letters between Korematsu and Ernest Besig, the director of the ACLU of Northern California.

In 1944, the Supreme Court ruled against Korematsu, saying that military necessity justified incarceration. Then in 1983, faced with new evidence and claims of government misconduct, Korematsu’s conviction was overturned, a decision that remains a prominent victory in civil rights history.

Executive Order 9066 was unofficially rescinded by President Roosevelt in December of 1944 and all camps had fully closed by the end of 1946. However, the order was not formally terminated until February 1976 by President Gerald Ford.

In 1980, nearly 40 years after its signing, Congress formed the Commission on Wartime Relocation and Internment of Civilians in order to review the facts and circumstances surrounding Executive Order 9066. The commission’s 467 page report called Personal Justice Denied explored reasons behind the order, its impact on American citizens and resident noncitizens, and recommended appropriate reparations. The report concluded that “race prejudice, war hysteria, and a failure of political leadership” and not “military necessity” were the motivations behind Executive Order 9066. As a result, Congress passed the Civil Liberties Act of 1988, extending a presidential apology and $20,000 to each surviving U.S. citizen or legal resident of Japanese ancestry who was incarcerated during WW2.

The California Historical Society is a partner in the CSU Japanese American Digitization Project, an ongoing collaborative digital history project bringing together archival collections related to Japanese American history from around the state. As part of this project, we have been able to digitize and provide metadata for 437 items from three collections related to the forced removal and incarceration of Japanese Americans during World War II: The Fred Korematsu case files from the ACLU of Northern California records, the Fred S. Farr papers and photographs, and the Joseph R. Goodman collection. These collections, in different ways, highlight the experiences of Japanese American incarcerees, as well as cases of dissidence and activism of individuals and organizations who fought for their rights during this period. Over the next year, CHS will contribute another 1000 items from our collection to the CSU Japanese American Digitization Project.

We encourage you to explore the collections below:

The ACLU of Northern California case file records contain legal documents and correspondence pertaining to the case argued before California courts and the United States Supreme Court in Korematsu v. United States (1944), challenging the constitutionality of Executive Order 9066. Correspondence includes letters and postal telegraphs between Ernest Besig, director of the ACLU of Northern California, and attorneys at the national ACLU office, who under the leadership of Rodger Baldwin Nash opposed the Northern California chapter’s decision to focus on the constitutionality of the Executive Order. The collection also includes correspondence between Besig and Korematsu during the time Korematsu was incarcerated at Topaz incarceration camp and later living and working in Salt Lake City, Utah.

The Fred S. Farr papers include seven letters to Farr from Japanese-American friends from California incarcerated at assembly centers and incarceration camps during World War II. Most of the letters are from Eiko Fujii, beginning shortly after her arrival at Santa Anita Assembly Center in 1942, continuing through her transfer to Denson, Ark., at Jerome Incarceration Camp, and ending after she left the camps and held a teaching position at the University of Michigan in Ann Arbor. The letters discuss daily life in the camps and her family’s physical, psychological, and emotional adjustment to life there, as well as references to Farr’s personal and professional life.

Also included in the Farr papers are six photographic prints, 1 photographic postcard, and 25 negatives, collected by Fred S. Farr, depicting the forced removal of Japanese Americans by train, and incarcerees arriving at an unidentified camp.