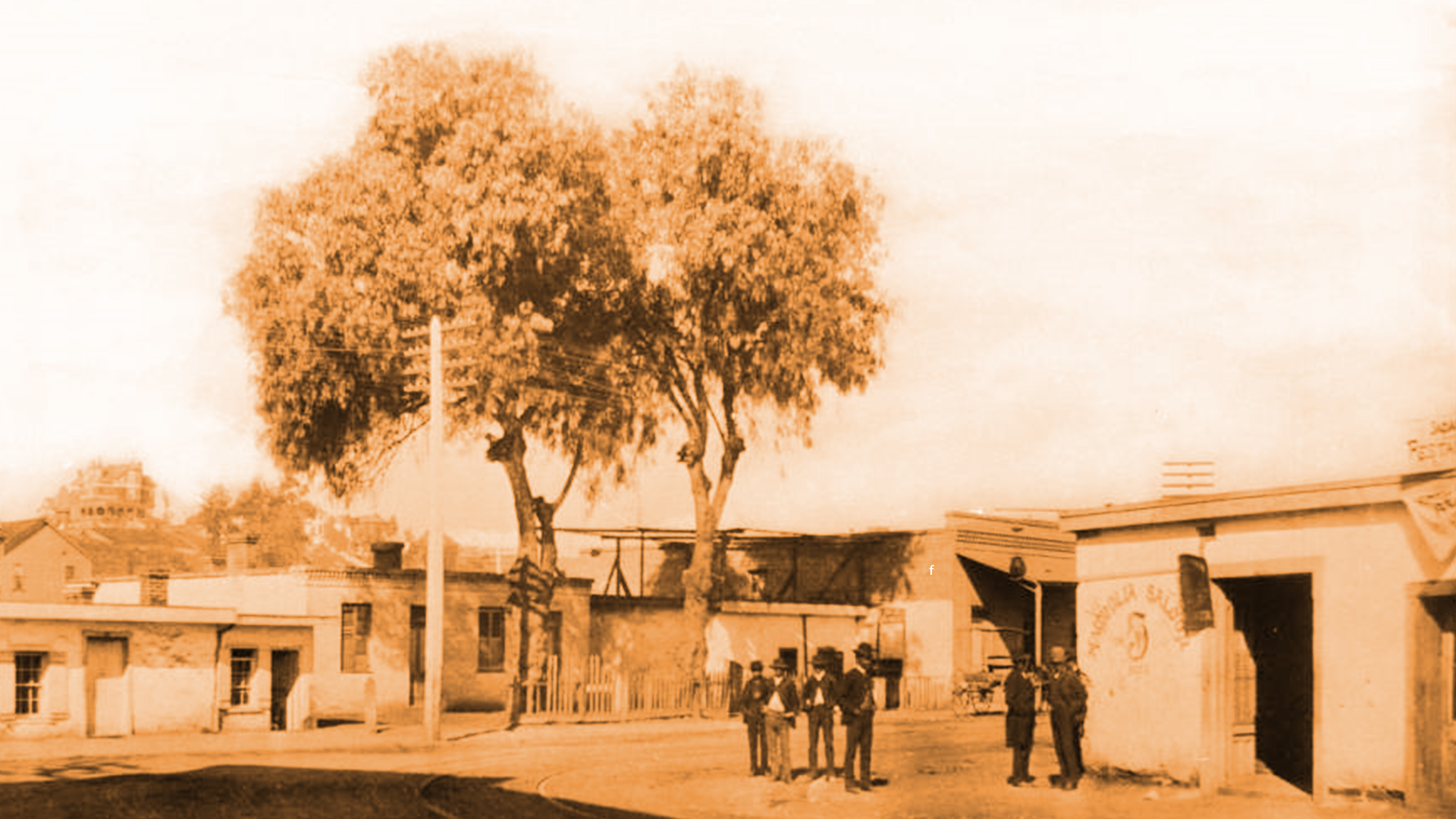 In the 1850s the new medium of photography, along with written and oral transmissions sent all over the United States, began to shape impressions of the new state of California and its two most prominent and rapidly growing cities, San Francisco and Los Angeles.

In the 1850s the new medium of photography, along with written and oral transmissions sent all over the United States, began to shape impressions of the new state of California and its two most prominent and rapidly growing cities, San Francisco and Los Angeles. As this new visual, oral, and textual image making was occurring, African Americans such as Mifflin W. Gibbs and Robert Owens were negotiating their rights as citizens to shape the region’s development as they pursued greater opportunities for economic advancement, social freedom, equity, and self-reinvention in San Francisco and Los Angeles, respectively.

Like many white Americans, Gibbs and Owens were lured to the state for its opportunities and “the good life” imagery produced by writers, painters, and photographers, and used by various boosters promoting migration to the state. The stories and imagery of Gibbs, Owens and other African Americans who participated in various phases of the western migration and settlement continue to remain largely absent from the dominant mythologies and history surrounding the western migration, notwithstanding investigations of the black West published during the last 50 years.

Although slavery was not allowed, the 1850 California constitution limited voting and the right to testify in court to whites, excluding African Americans, Native Americans, and Asians despite the fact that —San Francisco, the gateway to California—was one of the most racially and ethnically diversity cities in the world. By 1860, 75% of the black population in the North American West would reside in California, mostly in the northern part of the state. By 1900, this distribution would change and Los Angeles would become home to the largest black population center in the North American West. Despite their nominal freedom in California and racially discriminatory legislation they confronted, African Americans found refuge in western urban life which was abundantly more congenial than the places they left behind.

Born to a free black family in Philadelphia, Mifflin Wistar Gibbs’ life experience in his formative years, carpentry training, a literary society education he gained with the successful businessmen, leaders, and elites of the black Philadelphia community appear to have provide him with a good foundation for his life. After developing as a self-employed carpenter and contractor, voting rights activist, and member of the anti-slavery movement which included public speaking engagements with William Lloyd Garrison and Fredrick Douglass, in 1849, Gibbs realized he was at a crossroads in his young adult life. In 1850 he sailed to San Francisco from New York to join the gold seekers in northern California. Gibbs joined many other black men who immigrated to California from New York and Massachusetts that year, all of whom would become involved with resolving black issues across the state. In the antebellum period these men and others—including Robert Owens and his family—comprised the first voluntary African American migrants to the West. These black Americans migrating to California from the mid-nineteenth century to the early 1940s would have been courageous, ambitious, resourceful, and adventurous.

After arriving in San Francisco, Gibbs worked as a bootblack. Though trained as a carpenter, he could not find work because white employees on these jobs refused to work with him. He eventually partnered with Peter Lester, an expert bootmaker and fellow Philadelphian who Gibbs had known from abolitionist movement work, in a successful retail and wholesale business called Pioneer Boot and Shoe Emporium at 638 Clay Street. Servicing patrons from Oregon into Mexico’s Lower California, the successful venture sold fine boots and shoes imported from Philadelphia, London and Paris.

By 1856, Gibbs co-founded the Mirror of the Times, the first black-owned newspaper in California and west of St. Louis. As a leading member of San Francisco’s black community, he became an influential voice in the fight for African American freedom and full civil rights. Gibbs and Lester found good financial opportunities in San Francisco, he recounts in his autobiography, Shadow & Light (1902), but they continued to contend with ostracization, assaults where they had no redress, disenfranchisement and were denied the right to vote, sit on a jury or testify in a court of law. In the 1850s, he became a leader of the statewide California Colored Conventions, the first organized, civil rights protest and petition campaigns in the West with the goal to overturn the discriminatory laws that had been passed by the California legislature since 1849. Although not successful, regionally and nationally, Gibbs and his fellow travelers helped raise the social political consciousness about black and other nonwhite groups’ struggles for equality, civil rights, and the benefit of just government. The discriminatory laws and the increasing hostility towards black Californians during this era pushed Gibbs to join a mass migration of African Americans from San Francisco to Victoria, British Columbia in 1858. Once there, they developed businesses and supplied labor during the Cariboo Fields gold rush near the Fraser River. Significant resolution of the discrimination issues occurred in the 1860s due to California and federal legislation, and African Americans’ emancipation at the end of the Civil War in 1865.

As Gibbs was settling in and exiting San Francisco, Robert Owens and his family were thriving in Los Angeles. Born enslaved in Texas, Robert Owens earned money to purchase his freedom along with that of his wife Winnie, and their three children: Sara Jane, Martha, and Charles P. They migrated to Los Angeles and became residents in 1852-1853. Initially in Los Angeles, Owens worked odd jobs, and Winnie as a laundress. Eventually he won government contacts with the local U.S. Military post to supply cut wood, mules, and cattle that provided resources for him to open a livery stable and cattle sales venture that employed ten vaqueros (cowboys). Owens sold his products to the public on San Pedro Street, near what is today is known as the Little Tokyo neighborhood. He also invested in real estate throughout Southern California.

The Robert and Winnie Owens home became an early gathering place for religious, social, and business activities of the African American community in Los Angeles. Robert and Charles Owens, the Rowan family of San Bernardino, and white allies facilitated the important emancipation struggle of Bridget “Biddy” Mason (1818-1891) and her family. Fourteen people were freed from enslavement by a January 1856 court case overseen by Judge Benjamin Hayes in Los Angeles, unlike many other enslaved people who attempted to attain freedom through the courts and lost.

Charles Owens (d. 1882) and Ellen Mason (b. 1838), the eldest children in their respective families, married shortly after Ellen was freed in August 1856. Their union bore two children, Robert Curry (b. 1858) and Henry L. (b. 1860). Charles saw to it that his wife Ellen and their sons received formal education in the public schools of California with the highly regarded African American leader and educator Jeremiah B. Sanderson in Oakland and Stockton. Charles worked with his father and carried on the family business ventures after Robert Owens died in 1865 at the age of 59. It was noted at the time of the elder Robert Owens’ death that he was respected by all sectors of the multiethnic and mixed race city, and considered the wealthiest African American in Los Angeles. Upon Charles’ death, his wife Ellen and son Robert Curry Owens carried on the family business in conjunction with her mother and his grandmother, Bridget “Biddy” Mason. The family would continue to reap financial gains in the Los Angeles real estate booms, and became one of the wealthiest and most prominent African American families in California and the West into the 1920s, with Robert C. Owens being described as the most influential black man in California and the West. By the early twentieth century, stories of the Owens-Mason clan’s business success and philanthropy had a favorable impact on attracting African American migrants seeking better lives from across the U.S. Despite racism and discriminatory obstacles from 1850 to the twenty-first century, successive members of the Owens-Mason clan have survived, thrived, and shaped Los Angeles, California, and the West to this day.

The stories of Mifflin W. Gibbs and Robert Owens and his clan expand the narrative of California’s early statehood to include the diversity of people who contributed to its development and to American society. Their stories should become part of the collective memory of the nation.