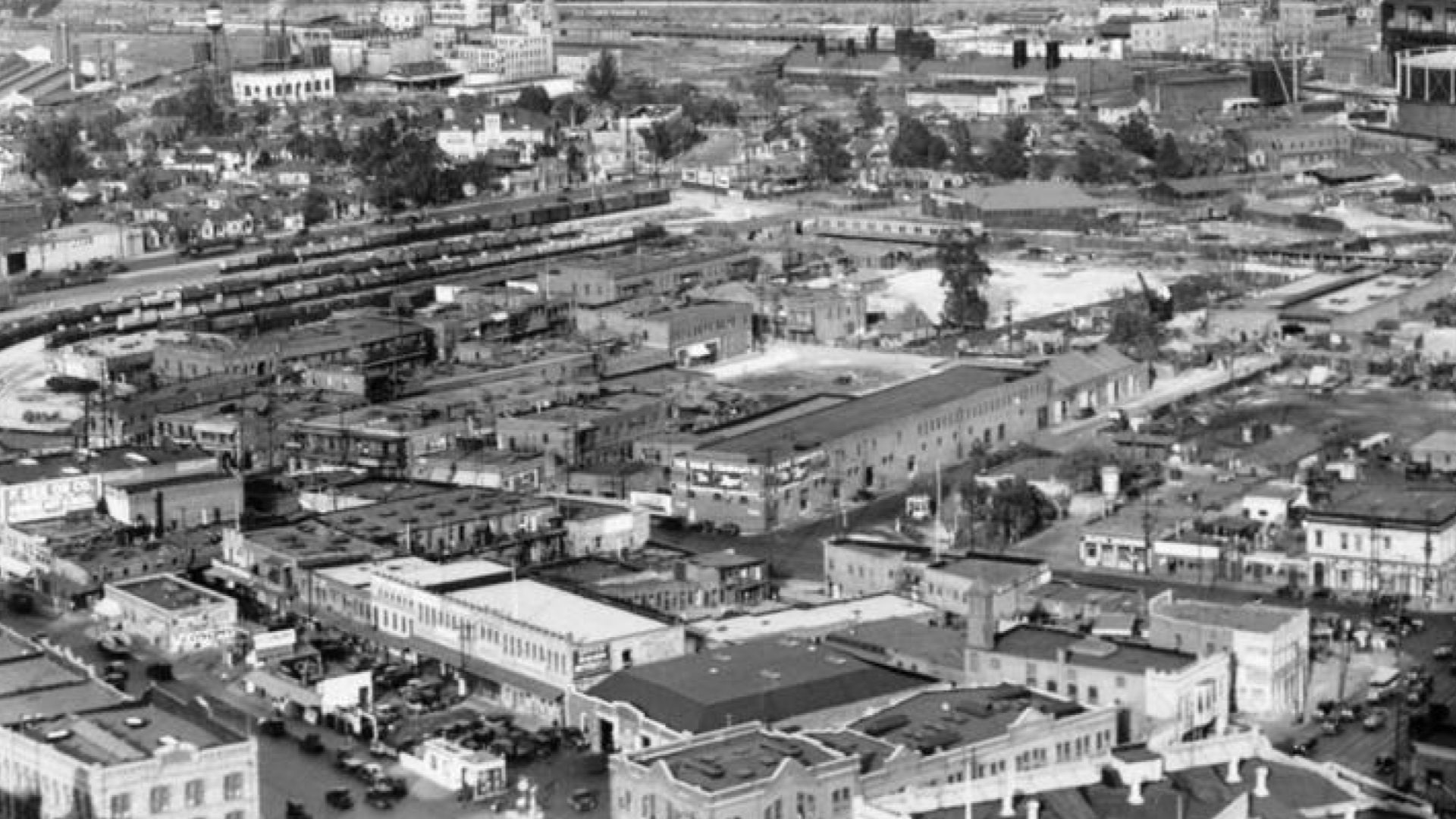 Los Angeles’s Union Station occupies a historic area of the city that was once Old Chinatown. This blog post explores how competing interests sought to mitigate the congestion issues of boom-era Los Angeles at the expense of the area’s longtime residents.

The Plaza area of Los Angeles is the true historic core of the city. Existence of human habitation dates back to the village of Yaanga, where the former Spanish governor of California, Felipe de Neve, chose to locate the pueblo that would become Los Angeles. Following the end of the Mexican-American War in 1848, the Californio population of primarily mixed Spanish, Indigenous, and African descent waned as more Anglo settlers arrived from the east and Chinese immigrants came from across the Pacific.

Old Chinatown included the former Calle de los Negros and extended east across Alameda Street to the area between Macy and Aliso Streets. As the city grew, the character of this area changed dramatically. The center of business, residential, and social life drifted south and westward, and disinvestment in the Plaza area resulted, giving it the character of a neglected slum as well as a red-light district.

Chinese-owned businesses of various types set up shop. By the 1870 census, Los Angeles had a recorded population of about two hundred Chinese people. This area was also prone to violence, as evidenced by the horrific massacre of Chinese people by an angry mob led by Anglo and mestizo citizens on October 24, 1871. The massacre made headlines in California and around the world.

Steps taken to quell future violence included renaming Calle de los Negros as part of Los Angeles Street in 1877. While civic leaders and boosters were ashamed and worried that the massacre would tarnish the city’s image, the Chinese community remained steadfast in its commitment to the area.1

In 1890, the French settler Philippe Garnier built the Garnier building on the block bounded by the extended Los Angeles, Plaza, Sanchez, and Arcadia Streets. Shortly before completion, “Mr. Garnier leased it to the Chinese American merchants, and the building remained in their care for several decades. Once regarded as the unofficial ‘city hall’ of Los Angeles’[sic] Chinese community, the Garnier Building housed shops, schools, temples, churches, and businesses during its heyday between the 1890s and 1940s.” The building was also host to “numerous social functions such as dances and theatrical performances.”2

The above images illustrate what Chinatown looked like in the 1930s. By the time the photographs were made, its fate as the site for a future Union Station—a terminal for all three major railway lines—had already been sealed. But how did this come to pass? A complicated series of factors and competing interest groups had battled over the area for more than ten years. The city had a little over one million inhabitants, and its haphazard growth had created stiff competition between automobiles, streetcars, and railroads. Severe congestion was most apparent in the Plaza-Chinatown area. Automobiles actually collided with trains and electric cars at an alarming rate.

To remedy the situation, the city council commissioned the Kelker-De Lew Report, which sought to study alternative modes of public transportation that would remove dangerous at-grade street crossings. The report concluded with a recommendation that the city build elevated rights-of-way to free up space on the streets. Historian Scott L. Bottles writes:

At the first public meeting regarding the rapid transit proposal in Los Angeles, citizens expressed surprisingly strong opposition to the Comprehensive Rapid Transit Plan. Most of the resistance to the report focused on Kelker and De Leuw’s strong support of elevated construction. . . . As these hearings proceeded, another long festering issue emerged—the city’s attempt to force the three transcontinental railroads serving Los Angeles to build a union station terminal. Three continental railroads entered Los Angeles during the early twentieth century—the Southern Pacific, the Union Pacific, and the Santa Fe. Each operated separate stations in or near the downtown area.4

Supporters of the proposed Union Station believed it would provide more convenient passenger access to the railroads while also meeting the growing demands of the city. “Furthermore,” Bottles wrote, “a union station between the Plaza and the Los Angeles River would eliminate many dangerous crossings. Trains entering the Southern Pacific station at Sixth and Main ran along Alameda Street. As automobile traffic increased near the end of the First World War, the railroad’s use of this major thoroughfare became dangerous and cumbersome.”5

The railroads had been resisting the idea of a Union Station terminal since 1911, when an engineer by the name of Bion J. Arnold completed a transit study for the city and concluded in favor of one. They supported the proposed elevated railway system, which would connect with their existing depot locations. By 1925, the railroads began to lose legal options for stalling construction on Union Station, including a lawsuit against the city of Los Angeles. In February 1925, the City Council put the Union Station question to a vote to be decided by the citizens on April 30 of that year. Proposition 8 asked, “Shall a Union Railway Passenger Terminal for all steam railroads be established in the City of Los Angeles?” and Proposition 9 asked whether the Union Station should be built at the Plaza site. The measures could be seen as severely simplifying a complicated matter, as no mention was made of an elevated railway option. Supporters of the elevated railways would have to defeat the Union Station vote in order to keep that possibility alive.

In the end, voters overwhelmingly approved a Union Station and narrowly accepted the Plaza site as its location. Certain marketing campaigns were likely a defining factor in this outcome. The Los Angeles Times, led by publisher Harry Chandler, printed many ads and editorials that endorsed the Union Station project and associated the elevated railway plan with dirty, dark, and blighted areas of Eastern cities that already had them. The elevated rails were cast as the antithesis of the sunny, health-conscious image city boosters had cultivated for years.

The railroads, for their part, had found their media ally in William Randolph Hearst’s Los Angeles Examiner. The Examiner focused on the benefits of an elevated train with respect to traffic congestion and grade-crossing issues while denigrating the Plaza area as inappropriate for a railroad station. “If there is ever to be a union station,” one editorial ran, “let it at least not be located between Chinatown and Little Mexico.” Which would the public prefer, the paper asked, a “depot in [the] Chinese district, or no more grade crossings?”6 The Examiner (and the railroads) were playing to racial anxieties among white citizens by alluding to the Plaza area as blighted and full of ethnic minorities—surely a culture shock for out-of-towners arriving in their fair city.

The Times was actually no less racist in its attitudes. Consider the editorial “End of Chinatown”:

The Civic Center Plaza depot plans spell the passing of Chinatown and its rookeries into the dim history of early Los Angeles. The steam shovels are now at work in the opening of the new Spring street north of First street. Just as the old buildings are being torn down on Main and Spring streets near Temple street to make way for the new City Hall, so under the Civic Center-Plaza union depot plans the character of the entire district will be changed as more and more buildings are torn down to make way for new and widened streets, parkways and sites for the State, Federal and other city and county buildings. Chinatown is doomed by the march of the greater Los Angeles Civic Center and the Plaza union depot.7

Historian Jeremiah B. C. Axelrod’s analysis of the matter succinctly points out that “Los Angeles’s carefully crafted image as a ‘White’ city, with clearly demarcated racial boundaries, would be reinforced—not weakened—by construction of this new urban ‘gateway’ on the Plaza site.”8 Ground was broken around 1934, and construction was completed by 1939.

Old Chinatown may have been razed, but its inhabitants, who had faced discrimination for decades, still strived forward. A new Chinatown would be built just a few blocks northwest. Much like the Chinatown in San Francisco that was rebuilt after the 1906 earthquake and fire, the new LA Chinatown exemplified stereotypical orientalist attitudes that US society had begun to embrace. It both accommodated the immediate needs of the displaced Chinese population and catered to the city’s tourist industry.