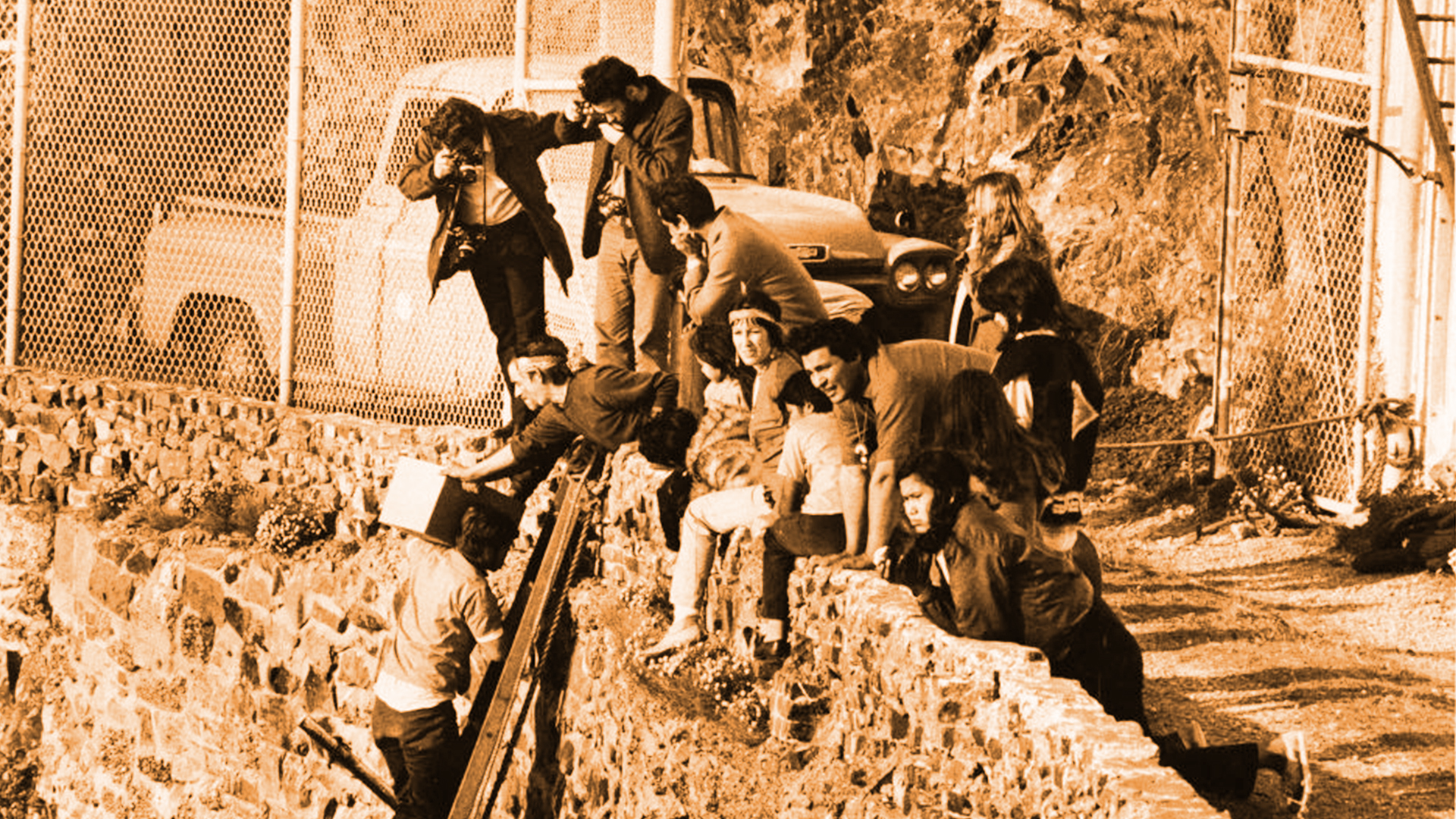 By Shelly Kale and Alison Moore

This month, the California Historical Society honors Native American Heritage Month with a look at the nearly 19-month-long Indian occupation of Alcatraz and the enduring outcome that came to fruition 40 years later. Through imagery and the voices of those who were there, we revisit this event, a defining moment in the Native American civil rights movement.

On November 20, 1969, a group of American Indians successfully breached a Coast Guard blockade andmade landfall on Alcatraz Island, shut down by the government six years earlier. The group, which called itself Indians of All Tribes (IOAT) claimed the land by “right of discovery,” and, some said, earlier treaties between Indians and the federal government. Previous attempts to claim Alcatraz in 1964 and the spring of 1969 had led to the Coast Guard blockade.
“We hold The Rock”
Richard Oakes, Mohawk, Occupation Leader
Issues around land—its meaning, the rights to it, and the abrogation of those rights—are frequently at the heart of modern land claims, as evidenced by current protests over the oil pipeline near North Dakota’s Standing Rock Sioux tribal lands. One hundred years before the occupation of Alcatraz, the Modoc War of 1872–73 in far northern California presaged the later occupation with a similar claim to native lands and a months-long standoff between the native peoples of the Klamath Basin area and the federal government. The site is now memorialized as part of the Lava Beds National Monument.
“If you wanted to make it in America as an Indian, you had to become a hollow person and let them remold you. . . . Alcatraz put me back into my community and helped me remember
who I am. It was a rekindling of the spirit.”
John Trudell, Santee Sioux
At times during the occupation of Alcatraz, there were reportedly hundreds of members of more than 20 tribes on the island. The occupation focused worldwide attention on the ongoing grievances of American Indians and gained support from national celebrities, local residents, labor unions, and other organizations that helped supply the occupiers with food and medical supplies.
“It was idealistic, and the generosity of the spirit of the people proved that we could change anything. People on the island were very strong about freedom of speech, freedom of dissent.
I saw the importance of dissent in government.”
Wilma Mankiller, Cherokee Nation
“We’re Indians, all of us, and we belong on Alcatraz. Indians never had prisons—yet here, in this white man’s prison, we have found freedom for the first time.”
La Nada Means, Shoshone Bannock

By 1971 conditions on the island, which had been challenging from the start, deteriorated to the point where, on June 10, armed federal agents stepped in and removed the dozen or so people who remained. In 1972 the island became a national historic site as part of the Golden Gate National Recreation Area.

Coast Guard Protecting American Indian Property, November 1969
“The occupation of Alcatraz exceeded our wildest dreams. It caused major changes in government policies toward Indians.”
Adam Fortunate Eagle Nordwall, Chippewa
“It’s easy to pass off the Alcatraz event as largely symbolic, but the truth is the spirit and dream of Alcatraz never died, it simply found its way to other fights.”
Benjamin Bratt, Actor and Alcatraz Occupier (tribe?)
In the aftermath of the occupation, federal policies toward Native Americans changed. Many tribal lands were returned. Native American activism continued, such as the occupation of Wounded Knee (1973). Of more enduring impact, in 2011 “We Are Still Here,” a permanent multimedia exhibition documenting the occupation, opened in the Alcatraz cellblock basement. The exhibition satisfies one of the demands of the occupiers: to establish a cultural center on the island.
“This exhibit is going to allow us to tell our story behind it. It’s going to allow us to express ourselves in a way that America hasn’t heard our voice. It’s going to give to a lot of tribes that have lost their ways and touch with their own culture, because of assimilation, lack of the language.”
Frankie Rivera, Navajo
“A lot of native kids don’t know the history of Alcatraz, they know a little bit about it, but they don’t know why we did it, and the reasons that we did it, and how it changed everything, how it started a whole new way of looking at yourself as an indigenous person.”
Michael Horse, Yaqui/Mescalero Apache

The exhibition, which opened on November 20, 2011, was produced by students and faculty at San Francisco State and California State University East Bay. It was designed to mark the occupation that began on the same day of 1969.  In addition to the exhibition, signs of the occupation are still visible to visitors of Alcatraz today.