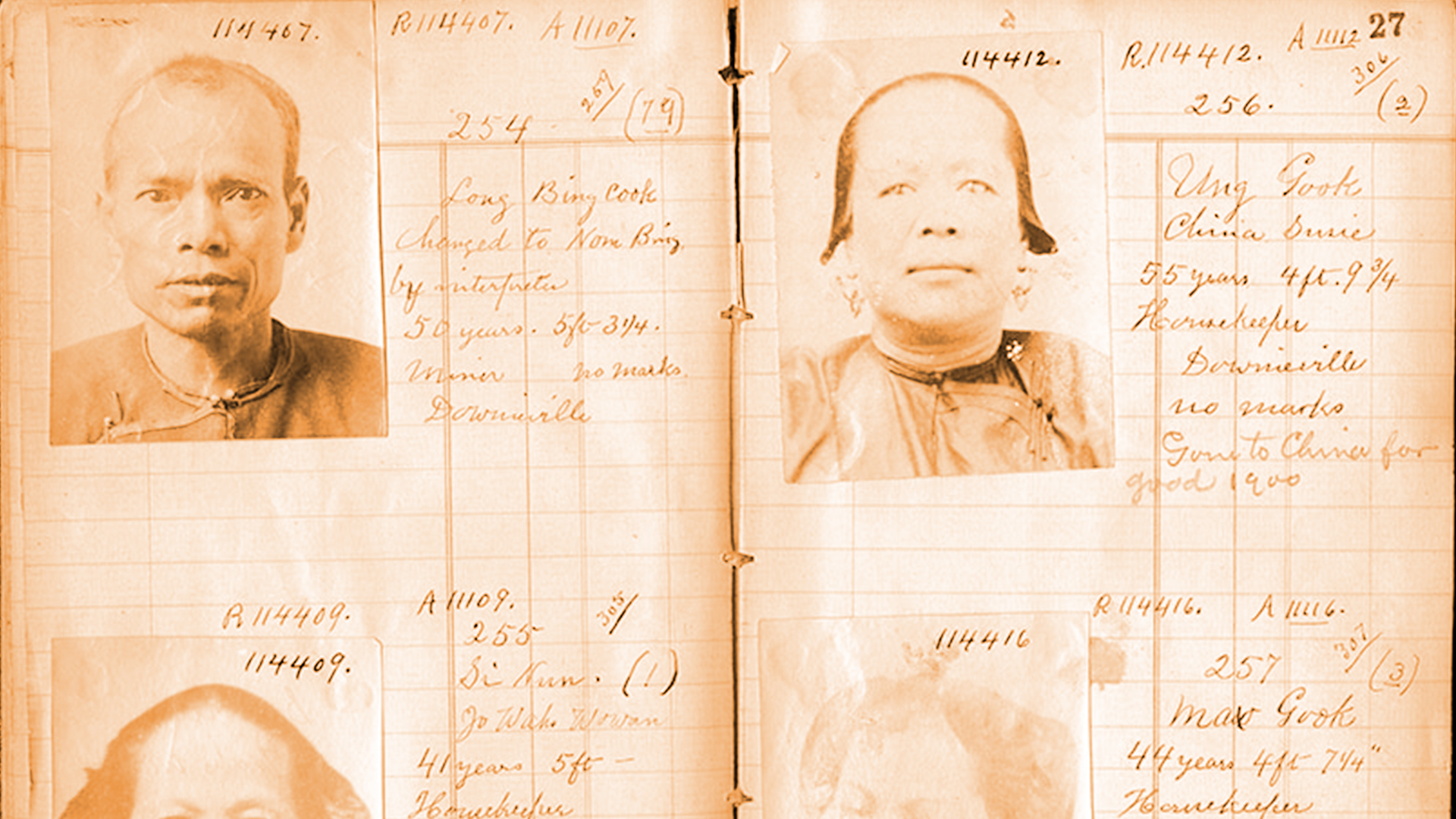 “Tracking Immigrants, Then and Now”

Erika Lee’s blog was originally published on April 12, 2017. We are posting an updated version this week in recognition of Chinese New Year, which will take place on Saturday, January 25, 2020.

There’s a photo from the California Historical Society’s North Baker Research Library that has fascinated me for years. It’s the page of an immigration officer’s journal from 1894. Stationed in Downieville, California, D.D. Beatty took photographs of nearly every Chinese resident in the city and noted their name, age, “identifying marks,” and other details as part of his work as an inspector for the U.S. Bureau of Immigration. The Geary Act of 1892 required all Chinese immigrants to register with the U.S. government (a long-forgotten precursor to the “Muslim registry,” or National Security Entry-Exit Registration System put into place after 9/11), and Beatty apparently used this journal to keep track of the Chinese immigrants in his jurisdiction. The faces of three women and one men stare out from their passport-size mugshots. Beatty’s careful cursive appears alongside. An older woman is identified as Ung Gook, or “China Susie.” At the time of the entry, she was 55 years old and noted as as “housekeeper.” Beatty found “no marks” on her face. An additional note was added in 1900: “Gone to China for good.”

I’ve been fascinated by this digitized source, because it documents the intense government surveillance of Chinese immigrants and Chinese Americans during the exclusion era in a way that no other source does. As someone who has spent her career researching and writing about immigration history and whose family was divided by the Chinese exclusion laws, D.D. Beatty’s journal has both research and personal significance. I’ve been using the digital version of this photograph for years in my public lectures and in my teaching. But I was only able to see the journal in person when I made a research trip to the North Baker Research Library. It was a powerful feeling to hold the journal for the first time and turn the pages of Beatty’s photographs and notations. I felt both the pull of history and of our contemporary times. Ung Gook’s fate – having “gone to China for good” – is being repeated today in so many immigrant communities, and as new government policies deport and ban immigrants today, remembering the consequences of this dark chapter in our history is more important than ever.
Written by Erika Lee
—
Erika Lee teaches American history at the University of Minnesota, where she is a Regents Professor, a Distinguished McKnight University Professor, the Rudolph J. Vecoli Chair in Immigration History, and the Director of the Immigration History Research Center. The granddaughter of Chinese immigrants, Lee grew up in the San Francisco Bay Area, attended Tufts University, and received her PhD from the University of California, Berkeley. She is the author of The Making of Asian America: A History, Angel Island: Immigrant Gateway to America (with Judy Yung), and At America’s Gates: Chinese Exclusion During the Exclusion Era, 1882-1943.

Her latest book, America for Americans: A History of Xenophobia in the United States was recently published by Basic Books. A reproduced photograph from D.D. Beatty’s journal appears in the book.