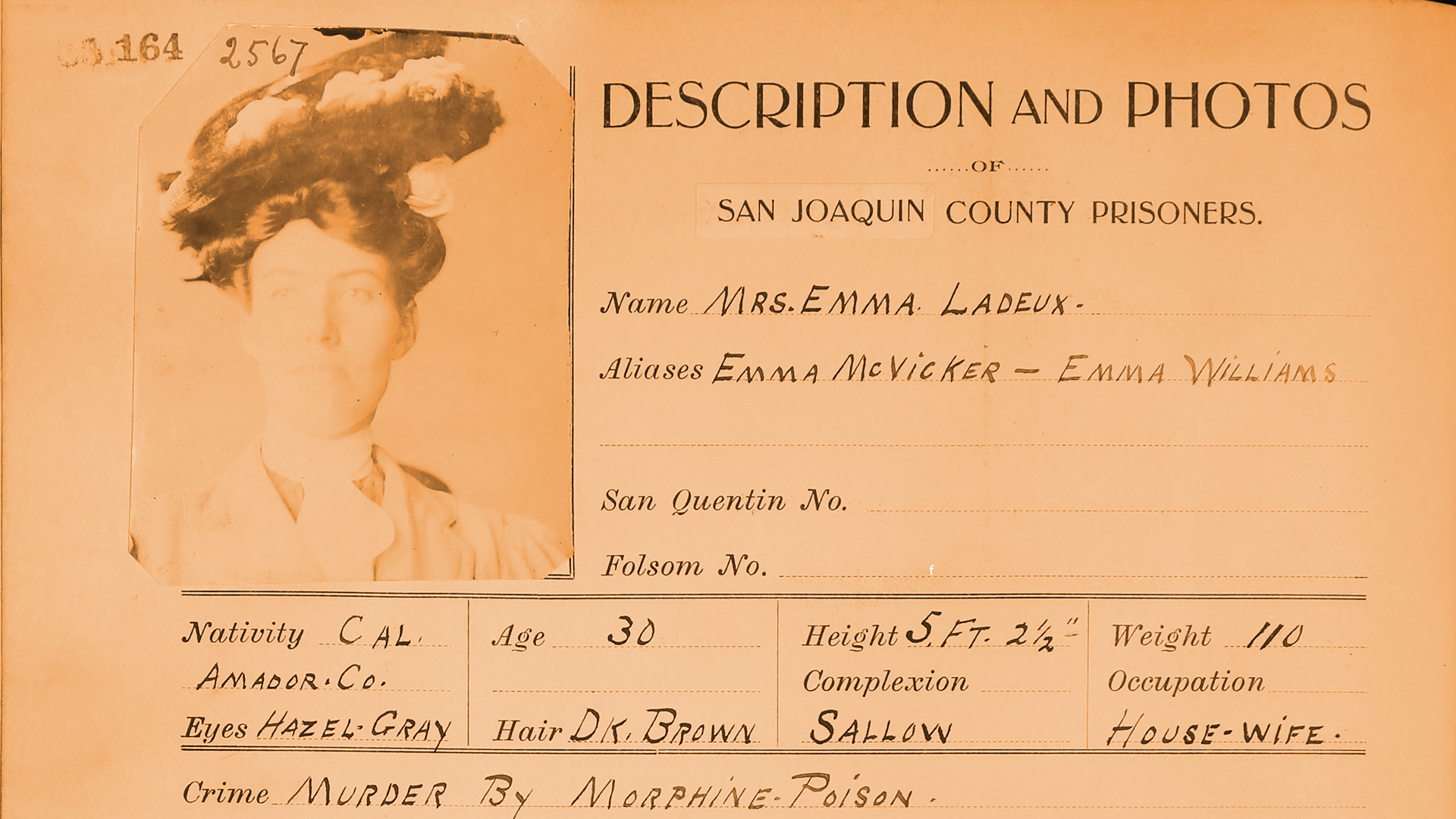 By Frances Kaplan and Jaime Henderson

San Joaquin County’s shift from a rural, agrarian community to a more industrialized, agricultural center brought about an influx of wealth and population that, in turn, led to an influx of crime—a common growing pain of newly developing communities. In fact, enough criminal activity took place on or against the railroad and its property that the Southern Pacific would eventually install its own agents to combat lawlessness on the rails. The San Joaquin County prisoner logbook provides a small glimpse of a wide range of crimes involving the railroad within the suddenly booming agricultural county, demonstrating only one of a myriad of geographic, economic, and cultural shifts caused by the railroad’s presence in San Joaquin County.

In the early 1900s, the San Joaquin Valley—California’s geographical and agricultural center—was marked by the growth of community and opportunity brought about by the Southern Pacific Railroad’s longitudinal linkage of San Francisco and Los Angeles by way of the valley. The movement of passengers and cargo into, out of, and through the valley caused its population and its agricultural industry to grow tremendously. In the years following the 1876 completion of the railroad connection between San Francisco and Los Angeles, the residents of the valley’s northernmost county, San Joaquin County, may have viewed the maturation of their community with mixed feelings. Some may have felt deep satisfaction with the prosperity and opportunity the railroad had afforded the county’s agricultural towns, while others—especially those who had helped settle the valley—may have had feelings of deep mistrust and bitter resentment toward the Southern Pacific Railroad, whose past strategies of obtaining land throughout the valley had caused loss of property and even life.

Much of the animosity between settlers and the Southern Pacific centered around events that occurred in Mussel Slough, Kings County, in 1880. Settlers had migrated to the valley throughout the 1870s, encouraged by the Southern Pacific to occupy land that had been given to the railroad company as a subsidy. The settlers set about improving the acreage surrounding proposed railroad tracks by building homesteads and developing agricultural and irrigation projects, confident that when ready to purchase the land, they would not be charged for the improvements they had made through their own labor. Instead, the settlers, expecting to pay two-and-a-half dollars per acre, were faced with prices set by market demand, sometimes reaching as high as twenty dollars per acre. The settlers banded together to fight this injustice while U.S. marshals began evicting settlers throughout the area. On May 11, 1880, a small group of men, including a U.S. marshal, set foot on the homestead of Henry D. Brewer and were met by an assemblage of settlers, gathered to thwart such evictions. While it is unclear how the gunfight began—it has been attributed to a skittish horse knocking the marshal down, quickly followed by the chaos of gun blasts—it resulted in the deaths of seven men. The shootout, which made national headlines, was significant not only for the high death toll, but also for how the incident played into the charged mythos of the outlaw West and a burgeoning national resentment of big industry’s subjugation of the common man.

In 1901, just over twenty years after the tragedy at Mussel Slough, Frank Norris published his California novel The Octopus, a scathing denunciation of the railroad’s actions in the San Joaquin Valley. The novel contains a retelling of the events of Mussel Slough as the natural, violent result of the railroad’s greed and ruthlessness in the valley. Norris’s sentiment, coupled with a turn-of-the-century societal tension between agrarian lifestyles and the growth of industry, bitterly reminded many of the valley’s residents of the earlier animosity between the settlers and the railroads. Many valley residents agreed with Norris’s description of the reviled company as “the iron-hearted monster of steel and steam.”

It is through the lens of both these historical facts and their resulting cultural mythology that we recently viewed two volumes containing mug shots and descriptions of people arrested in San Joaquin County between 1902 and 1907. Each record includes a black-andwhite mug shot as well as information about the alleged perpetrator’s physical appearance, alleged crime(s), victim(s), and sentence. In particular, we were interested in the types of crimes that had taken place on the railroad, the suspects and victims involved, and the motives surrounding their crimes. Over the five years covered in the prisoner logbook, eight crimes were recorded as being committed against either a railroad company itself or railroad passengers and personnel. The descriptions of the crimes are dispassionate and provide no insight into motives or into the targeting of the railroad companies. In most cases the trespasses against the railroad companies were clearly crimes of opportunity, often recorded as petit larceny: an overcoat, blankets, and materials such as brass and iron were all recorded as burgled items. Punishment for the thefts varied, ranging from ten days in the county jail or a ten-dollar fine to three years’ confinement in San Quentin. One cannot help but wonder, though, about the motives in two of the more interesting crimes, both of which could have resulted in loss of life. A seventeen-year-old Swiss immigrant, Ernest Intergant, was sentenced to thirty days in the county jail for removing a railroad switch lamp from a Santa Fe Railway line on November 20, 1903. Although his crime was originally considered a felony—removing a switch lamp could cause derailment of the railcars, resulting in major loss of life or cargo—his sentence was reduced to malicious mischief. Two years later, on December 16, 1905, Victorio Yopez fired seven shots at several men seated in a Santa Fe railcar. The prisoner logbook records Yopez’s occupation as “R.R. [Railroad] Laborer,” which certainly provokes curiosity over the motivation for the shooting. Yopez was arrested the following day, pleaded guilty to the crime, and was sentenced to one-and-a-half years in Folsom prison.

Then there is the crime of Emma LaDeux (often spelled “LeDoux” in later published accounts), a thirty-year-old woman from Amador County, California, who attempted to take advantage of the Southern Pacific’s services in the San Joaquin Valley by using the railroad as an unwitting accomplice in her criminal activity. Among more than two hundred arrest records in the same San Joaquin County logbook, Emma’s stands out, not only because she is one of only three women or because her crime (poisoning her husband to death with morphine) is shocking in its premeditated violence, but because—unlike her contemporaries— she could just as easily be posing for a portrait, instead of a mug shot for a police photographer. The photograph reveals a young woman, head held high, her gaze veering slightly away from the camera. A scarf is wrapped around her long neck, and an elaborately decorated hat is perched fashionably at an angle on her neatly styled hair. Although she must have realized the severity of the charges she faced, her composure was unwavering before the camera.

On March 23, 1906, Emma LaDeux (aka Emma Williams or Emma McVicker) killed her third husband, Albert N. McVicker, in the lodging house where they were staying. Afterward, she stuffed his body into a trunk and arranged for it to be sent to the nearby Stockton station. The logbook does not detail the destination she had in mind for the body, but clearly the railroad provided the perfect opportunity to get it as far away as possible from the murder scene. Unfortunately for Emma, the untagged trunk sat too long on the station platform and the odor quickly alerted station workers that something was amiss. For three days she avoided the authorities before being arrested in Antioch by a local deputy sheriff named Shine. According to the Haggin Museum, which holds the trunk in its collection, Emma was headed to meet a Mr. Jean LeDoux, the man she had married a year before without first divorcing the unfortunate Mr. McVicker—adding bigamy to her list of punishable offenses.

After her arrest, she was brought back to Stockton to await trial. It might have been hard for jurors to believe that such a slight, refined-looking woman—at five feet two inches and 110 pounds—could have commited such a heinous crime. Nevertheless, on August 7, 1906, the jury found her guilty of murder in the first degree and the presiding judge, Joaquin County Superior Judge W. B. Nutter, made history by sentencing Emma LaDeux “to hang at San Quentin”—the first woman in California to receive the death penalty. Emma’s luck, however, may not have been all bad. An addendum to her arrest record, scrawled across the bottom of the page in red, hints at a potentially more positive outcome to her case: “Took an appeal and is still in appeal at this time—Sept. 12, 1907.” In the end, Emma spent two years in the San Joaquin County Jail before getting word that her appeal was successful, her death sentence commuted to life in prison. Nearly fourteen years from the day she killed her husband and sent his body off to the train station, Emma was released from San Quentin on parole and walked free.

San Joaquin County’s shift from a rural, agrarian community to a more industrialized, agricultural center brought about an influx of wealth and population that, in turn, led to an influx of crime—a common growing pain of newly developing communities. In fact, enough criminal activity took place on or against the railroad and its property that the Southern Pacific would eventually install its own agents to combat lawlessness on the rails. The San Joaquin County prisoner logbook provides a small glimpse of a wide range of crimes involving the railroad within the suddenly booming agricultural county, demonstrating only one of a myriad of geographic, economic, and cultural shifts caused by the railroad’s presence in San Joaquin County and in the greater San Joaquin Valley.