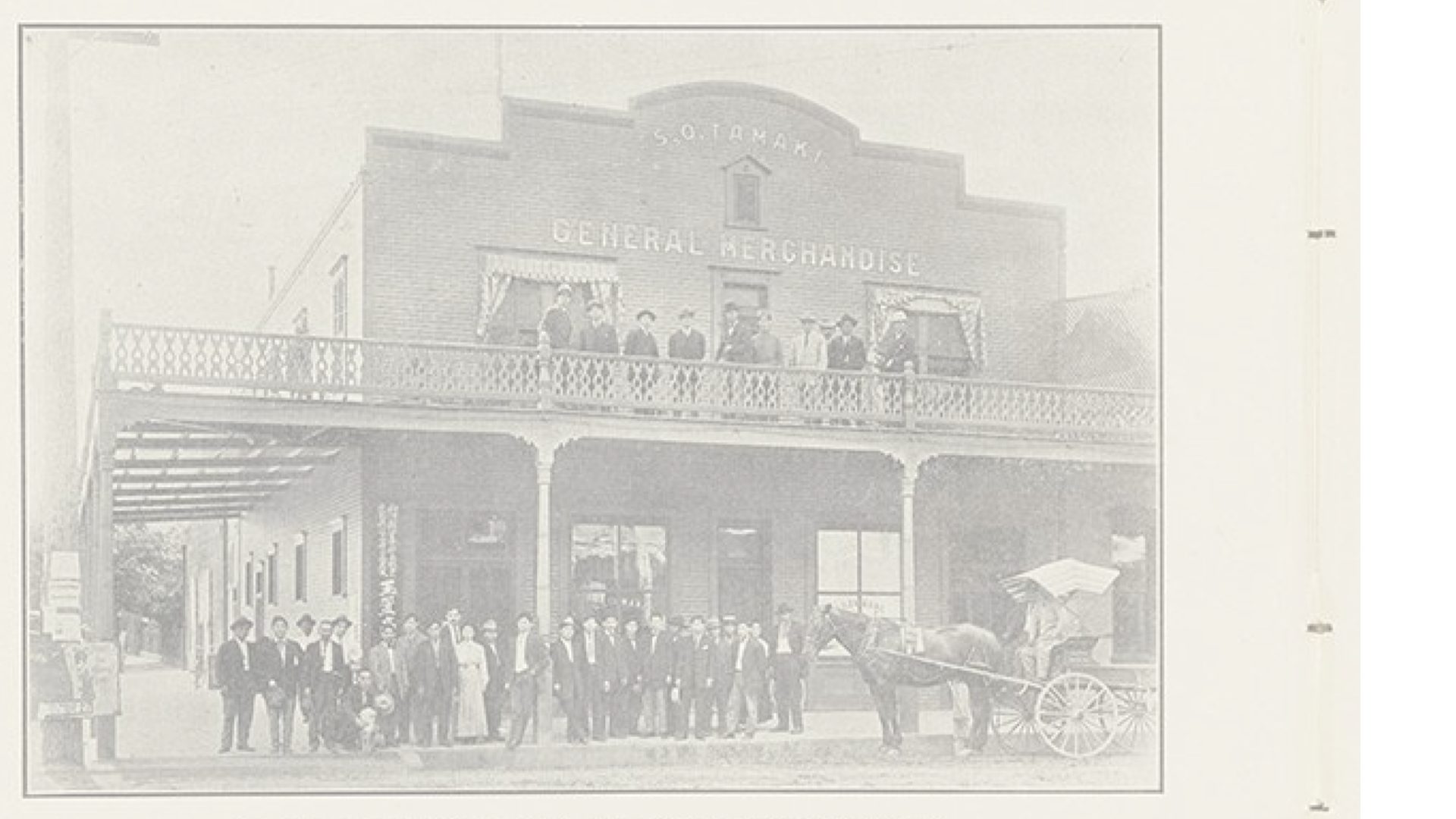 The California Historical Society (CHS) recently completed its work as a partner in the California State University Japanese American Digitization project, a collaborative digital history initiative bringing together archival collections related the history of Japanese Americans from around the state. Below is a guide to the 1,300 items CHS contributed from its collections that are now available on the CHS Digital Library and the CSUJAD online collections website.

This month marks the 80th anniversary of Executive Order 9066, signed and issued by President Franklin D. Roosevelt on February 19, 1942, which provided the basis for mass forced removal of all Japanese Americans from the West Coast to inland concentration camps.1 Under the guise of national self-defense, the order authorized the army to designate certain areas within the United States as military zones “from which any or all persons may be excluded.”2 A month later, on March 21, 1942, Congress passed Public Law 77-503, which rendered Executive Order 9066 enforceable by criminalizing the violation of its restrictions.

Under the legal protection of these two acts, the Wartime Civil Control Administration issued 108 exclusion orders over the next five months to systematically force the removal and incarceration of approximately 120,000 Japanese Americans from the West Coast without trial or due process. Residents of each area affected by an exclusion order were given one week to make arrangements for their businesses, farms, and homes. Many lost all their material property and assets as they were sold, confiscated, or destroyed in storage while their owners were imprisoned. At the camps, individuals and families lived in cramped conditions in uninsulated buildings through hot summers and harsh winters. Incarcerees were isolated from society by barbed wire, armed guards in towers, and stretches of surrounding wilderness. They remained so for two to four years, on average.

Executive Order 9066 was not formally terminated until February 1976, by President Gerald Ford. In 1980, the congressional Commission on Wartime Relocation and Internment of Civilians concluded in a 467-page report called “Personal Justice Denied” that “race prejudice, war hysteria, and a failure of political leadership” and not “military necessity” were the motivations behind Executive Order 9066. In 1988, Congress passed the Civil Liberties Act of 1988, which stated that “a grave injustice was done,”3 and ordered payment of $20,000 in reparations to formerly incarcerated Japanese Americans or their heirs.

In December 2021, CHS completed our work as a partner in the California State University Japanese American Digitization project, a collaborative digital history initiative bringing together archival collections related the history of Japanese Americans from around the state. The digital collections, hosted by the Gerth Archives and Special Collections at CSU Dominguez Hills, were created through a consortium of CSU archives along with a variety of other institutions, including CHS and the Japanese American National Museum in Los Angeles.

As part of this project, CHS contributed digital copies and metadata for 1,300 items from eight collections related to Japanese American histories in California. The collections include correspondence, printed journals and newspapers, works of art created by incarcerated Japanese Americans, and letters and legal files documenting the efforts of Japanese American activists and organizers and their allies working to overturn Executive Order 9066 and end the government’s policy of mass removal and incarceration. Also included are documents that show the inner workings of the Wartime Civil Control Administration and the War Relocation Authority, who enforced the exclusion orders and administered the camps.

The CHS collections now available on the CHS Digital Library and the CSUJAD online collections website include the following:

Legal resisters Fred Korematsu4 and Mitsuye Endo5 fought exclusion and incarceration in landmark Supreme Court cases challenging exclusion and incarceration. In the Endo case, the US Supreme Court unanimously ruled that the federal government could not indefinitely detain US citizens who were “concededly loyal” to the government, ultimately leading to the closure of the War Relocation Authority concentration camps.

The newsletter of the ACLU of Northern California began publication by the San Francisco chapter beginning in 1936 and continues to this day. It includes articles, case summaries, and editorial content related to the organization’s legal work and civil rights advocacy. Newsletters published from 1942 to 1945 follow the Korematsu and Endo cases as well as the Supreme Court cases of two other legal resisters, Gordon Hirabayashi7 and Minoru Yasui8.

Joseph R. Goodman and Elizabeth B. Goodman were members of the American Friends Service Committee living in San Francisco, and became active in the movement to oppose exclusion and incarceration of Japanese Americans. Between 1942 and 1944, Joseph Goodman taught high school math and science at the Topaz concentration camp in Utah, and the Goodman papers offer a window into the experiences, views, and strategies of the individuals and organizations he worked with. The collection contains personal correspondence, organizational records, government documents, publications, and other papers created or collected by the Goodmans and their friends.

Of special note are the papers and letters of Lincoln Kanai9, a social worker with the Young Men’s Christian Association and civil rights activist. Kanai openly tested the removal and confinement orders by remaining in San Francisco past the date of exclusion, and then leaving the Bay Area without authorization on June 1, 1942. He traveled by car throughout the West and Midwest, and spent the following month meeting with community leaders, politicians, clergy, and college and university staff and students, advocating for the rights of Japanese Americans and organizing support for hosting incarcerated students and families east of the exclusion areas. He was arrested by the FBI on July 11, 1942, near Milwaukee. After his arrest, Kanai challenged the constitutionality of Public Law 77-503 in a lesser-known court case, which was unsuccessful. He was incarcerated at Fort Lewis, Washington, and later at Heart Mountain concentration camp in Cody, Wyoming.

Kanai’s daily letters to Goodman and others are evidence of his unrelenting struggle for justice. His final letter to Joseph Goodman was sent from Heart Mountain, six weeks after being transferred from Fort Lewis. In it, Kanai expresses the urgent need for structural change, writing that sentiments of goodwill and care from people outside the camps “must be simply expressed and organized into a power to influence the conduct of our government and its bureaucracies.”10

Fred S. Farr was a Democratic California State Senator from 1955 to 1966, and worked with the Farm Security Administration during World War II. The collection contains photographs and letters to Farr from Japanese American friends incarcerated during World War II. Most of the letters are from Farr’s friend and former coworker Eiko Fujii. Fujii’s letters begin shortly after her arrival at the Santa Anita detention center in 1942, continuing through her transfer to the Jerome concentration camp in Denson, Arkansas, and ending after she left the camps and held a teaching position at the University of Michigan in Ann Arbor. As she discusses daily life in the camps and her family’s physical, psychological, and emotional adjustments, Fujii’s writing style is candid, personal, and often wryly sarcastic. Her cutting humor overlays a palpable rage. Below is a photograph included in the collection; its relation to Fujii and Farr is unknown.

William J(ohn) Mountin was employed by the Statistical Branch of the Wartime Civil Control Administration (WCCA), under the Assistant Chief of Staff for Civil Affairs, Western Defense Command and Fourth Army. Established in March 1942 by order of General John DeWitt, the WCCA oversaw the forced removal of roughly 120,000 Japanese Americans from the West Coast and administered detention camps called “temporary assembly centers.” In the late summer and fall of 1942, the WCCA transferred incarcerees to longer-term camps run by the War Relocation Authority. The WCCA was dissolved on March 15, 1943. Mountin amassed and maintained the materials in this collection through the course of his work. They consist of memos, reports, bulletins, forms, reports, maps, civilian exclusion orders, broadsides, ephemera, and publications related to the forced removal and incarceration of Japanese Americans.

This small collection consists of twenty-four copy prints made from drawings of the Tanforan detention facility by architect Siberius Yoichi Saito while he was incarcerated there. The facility was located at the Tanforan Racetrack in San Bruno, where incarcerees were made to live in stables and horse stalls. Between April 28 and October 13, 1942, more than 8,000 Japanese Americans were incarcerated at Tanforan, most of whom were from the San Francisco Bay Area.

El Joaquin was a newspaper published at the Stockton detention facility every Wednesday and Saturday from May 30, 1942 to September 28, 1942. It reported on living conditions, activities, sports, events at other camps, and the move to Rohwer Incarceration camp in Arkansas. A regular cartoon featured a character named Pancho created by art editor George Akimoto. For a great dive into the subversive subtext of the Pancho cartoons, check out this 2019 blog post from former CHS project archivist Lynda Letona.

The 267 photographs document the rich and vast agricultural and farming communities established by Japanese Americans in the decades prior to World War II. Many were affected by the passage of California’s Alien Land Law in 1913, which prohibited “aliens ineligible for citizenship” from owning agricultural land and was designed to target Japanese immigrant farmers.11

As we remember the injustices carried out against Japanese Americans by the US government, our hope is that broad access to these newly digitized collections will lead to more scholarship and learning about the people and communities who experienced incarceration, and those who fought for their rights and for the rights of all. We send a huge thank you to CSU Dominguez Hills for providing online access to CHS collections alongside more than 46,000 other items from twenty-nine institutions through the CSU Japanese American Digitization project, and to Densho Encyclopedia for providing a reference on the Japanese American story during World War II.

For information about terminology used to describe the forced removal and incarceration of Japanese Americans, please see the Densho Encyclopedia article “Do Words Matter? Euphemistic Terminology: Why Describing the Experiences of Japanese Americans during WWII with Words Like ‘Internment’ and ‘Relocation’ Is Misleading and Inaccurate.”