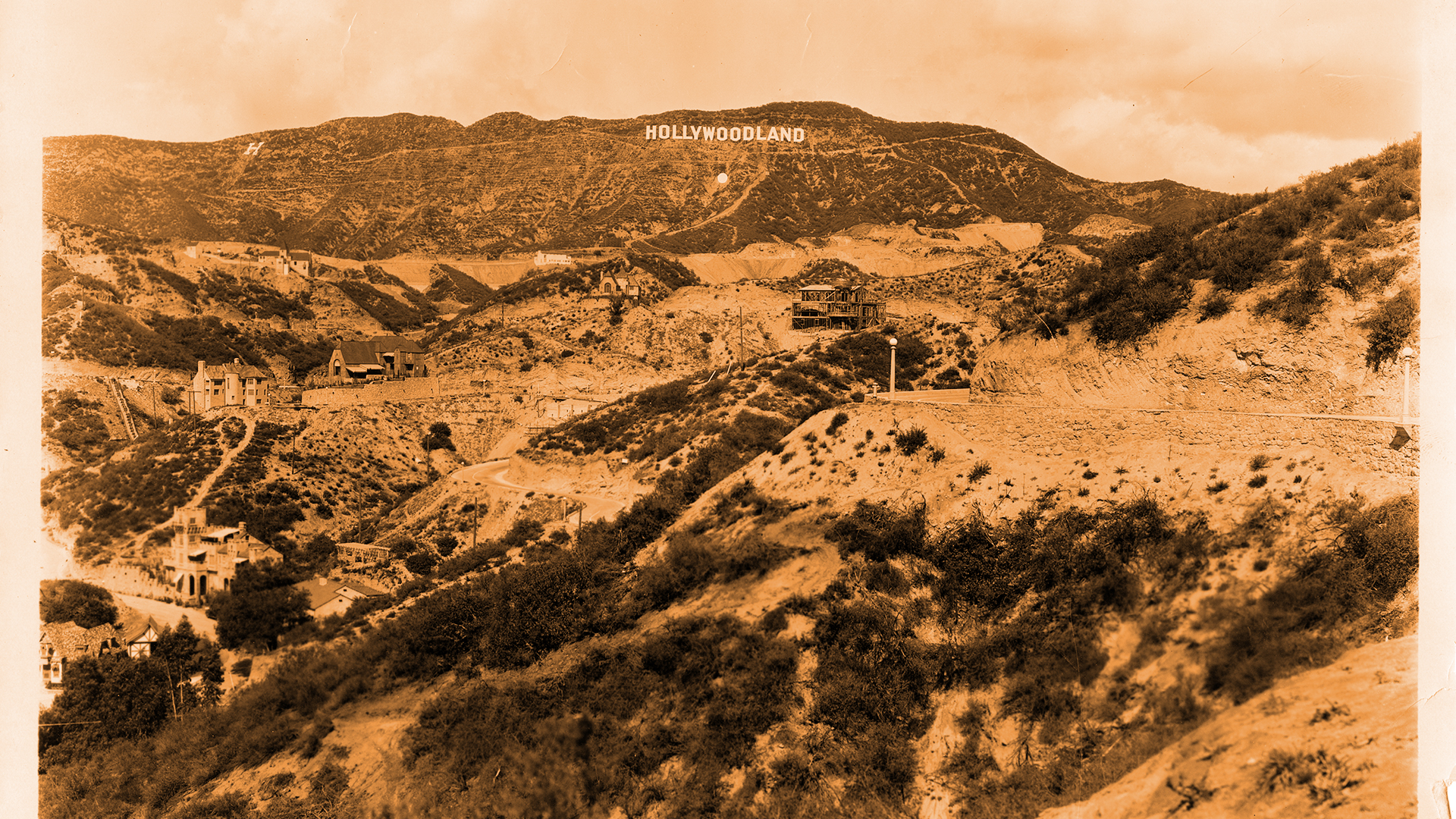 The new medium of photography arrived in California just in time to witness the state’s dramatic, and often violent and inequitable, transformation at the hands of Americans. But photographs do not simply bear witness to events unfolding before the camera: they also interpret these events and imbue them with meaning. At first glance, the Hollywoodland sign seems straightforward—an objective record of what Hollywood looked like before it was fully developed, and before the “land” was dropped from its name. But it has so much more to say.

Here at the California Historical Society, we’ve been busy installing the upcoming exhibition Boomtowns: How Photography Shaped Los Angeles and San Francisco. Drawn from CHS’s extensive photography holdings, the show looks back at the first one hundred years of photography in San Francisco and Los Angeles to consider how the medium shaped both our impressions of these cities and the bricks and mortar of the cities themselves.

The new medium of photography arrived in California just in time to witness the state’s dramatic, and often violent and inequitable, transformation at the hands of Americans. But photographs do not simply bear witness to events unfolding before the camera: they also interpret these events and imbue them with meaning. Sometimes subtle compositional choices can convey complex attitudes and ideas. Consider, for example, this photograph of the original “Hollywoodland” sign, taken by an unknown photographer in Los Angeles circa 1924–29 (fig. 1). At first glance, it seems straightforward—an objective record of what Hollywood looked like before it was fully developed, and before the “land” was dropped from its name. But it has so much more to say.

Let’s look closely at the composition. To make this image, the photographer was likely standing on a dirt bluff adjacent to a newly built road. This might seem like an innocuous detail, but it prompts the question: Why didn’t they shoot from a closer vantage? Why show the sign so far in the distance, with the vast valley sprawling out before them? We may never know for sure, but the viewpoint conveys a burgeoning city rife with potential for developers, industrialists, and new residents. In the foreground, the out-of-focus shrubs and undeveloped land suggest that the region is wild and uninhabited, and thus ready to be built up. At the same time, the newly built roads weaving through the frame, and the small number of impressive houses being constructed throughout, convey that the city is not without infrastructure. Come to Hollywoodland, the image seems to say, and be a part of the exciting changes already taking place.

In the 1920s, a syndicate of developers, including Harry Chandler of the Los Angeles Times, planned a subdivision in the hills above Beachwood Canyon near Griffith Park. Anticipating that the Mulholland Highway, then under construction, would eventually connect to the site, the group erected what was meant to be a temporary fifty-foot-high sign across the top of Mount Lee advertising the development. It would become, after the last four letters were removed in 1949, one of the most iconic landmarks in the world. Laborers with steam shovels graded roads connecting the neighborhood’s streets with Mulholland Drive. Photographs much like this one appeared in real estate brochures, suggesting that this picture may have been taken to appeal to developers or to sell homes.
In photography, what is not pictured can often be as revealing as what is. The perception of Los Angeles as an empty canvas required obfuscating any signs of an indigenous history, despite the fact that the region had been occupied by humans for more than ten thousand years. This myth of Los Angeles as an empty canvas is propagated by our Hollywoodlandimage, which suggests that these newly built houses—and the bright white sign watching over them—are the first-ever human marks on the chaparral-covered land. Similarly, the storybook homes dotting the wooded canyons, designed in the Spanish, French, and English styles, imply that Los Angeles emerged as if from a fairy tale. All of this smooths over the turbulent and often violent events underlying the region’s development, which involved unchecked violence by Anglos against Mexicans, Native Americans, and Chinese.
Belying the grotesque social realities of the day, this image would have come across as nostalgic, evoking the pastoral rusticity of an imagined Spanish past. But look closely and you can see how it, like so many other photographs in Boomtowns, reveals that nothing about the construction of California’s cities was inevitable. They were built and rebuilt by labor, force of will, profit imperatives, and the frame of the camera. We encourage you to visit this exciting exhibition in person, and see what a crucial role the camera played in building our state.