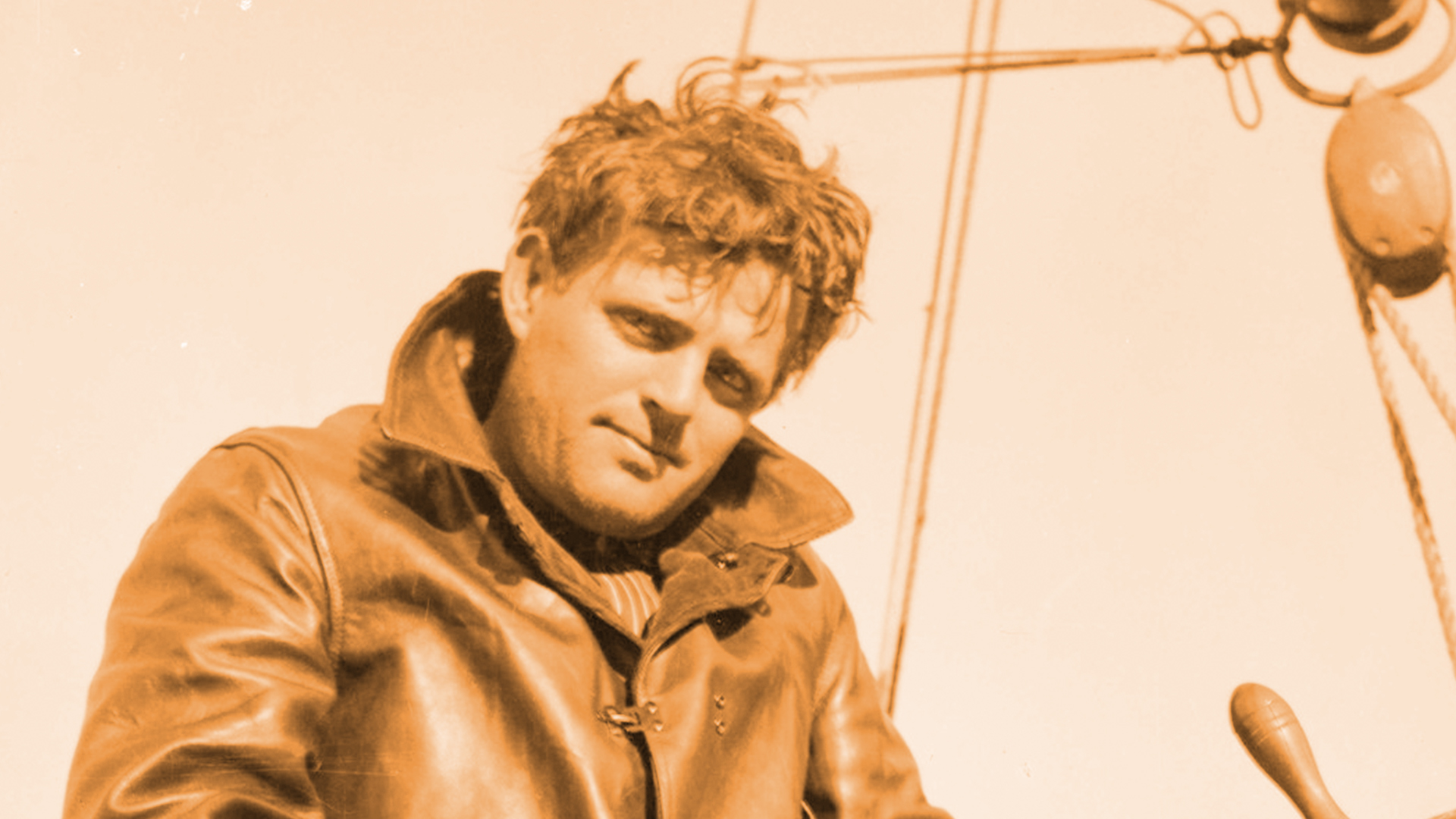 Jack London had two sides. Lacking the cultural capital of connections, the author learned early on that a successful literary career could be bolstered by the symbolic capital of celebrity status. Through his stories and publicity photographs, London shrewdly marketed his authorial persona as that of both the rugged sailor and the posh intellectual, appealing to Victorian America’s fascination with wilderness—and its attention to propriety.

Jack London had two sides. Lacking the cultural capital of connections, the author learned early on that a successful literary career could be bolstered by the symbolic capital of celebrity status. Through his stories and publicity photographs, London shrewdly marketed his authorial persona as that of both the rugged sailor and the posh intellectual, appealing to Victorian America’s fascination with wilderness—and its attention to propriety.

We can see this dual persona expressed in a famous photograph of London sitting at the helm of one of his boats (most likely the Roamer), holding what appears to be a magazine (fig. 1). The pen in his right hand is perched delicately between his fingers like a cigarette; his leather jacket is glossy and sumptuous, with ripples of sunlight zigzagging up his arms like eels. London’s stiff collar mirrors the mop of windswept hair that reaches down his forehead, drawing our eyes toward his gentle yet thoughtful expression. The photograph encapsulates all that we wish to remember about London: the improbable simultaneity of the oyster pirate and the man of letters, neatly packaged as the handsome and affable writer known as Jack London.

I was reminded of London’s split celebrity in my first week here at the California Historical Society, when my colleague Cheryl Maslin surprised me with a treasure: Jack London’s flask, likely given to him by his friend, the poet George Sterling (fig. 2). Holding the flask in my hands, I could feel the two Jacks come through in its variable textures. On the upper half, a layer of orange and black snakeskin hugs the circumference, its raised scales feeling warm to the touch. On the bottom, the tarnished silver base is cold and smooth save for the neatly engraved inscription (“Jack London, from a loving friend”) and the wave-like pattern carved onto a collar separating the two halves of the flask. To hold it in your hands is to feel both hemispheres—warm and cold, rippled and smooth, connected somehow by those undulating waves.

In his book Martin Eden (1909), London tells the story of a young man who attempts to overcome his working-class roots through self-education, eventually becoming a successful writer in the San Francisco literary scene. It’s easy to be tempted by the parallels between Martin Eden’s rise and London’s own biography, and many have, using the final scene of the novel in which Eden commits suicide by drowning as one piece of evidence that London himself died by suicide and not kidney failure (as was recorded on his death certificate). The scene is chilling; London describes Eden’s body bobbing in the water like a buoy, split into halves not unlike the snakeskin flask:

“He glanced up at the quiet stars, at the same time emptying his lungs of air. With swift, vigorous propulsion of hands and feet, he lifted his shoulders and half his chest out of water…Then he let himself go and sank without movement, a white statue, into the sea…He seemed floating languidly in a sea of dreamy vision. Colors and radiances surrounded him and bathed him and pervaded him. What was that? It seemed a lighthouse; but it was inside his brain—a flashing, bright white light.”

Here, London uses the metaphor of a “bright white light” to connote death and dying, as Eden slowly sinks and allows the seawater fills his lungs. But the light provides a different metaphorical significance in the first chapter of the book, when Eden encounters his first oil painting in the home of a wealthy neighbor:

“The lines of [Eden’s] face hardened, and into his eyes came a fighting light. He looked about more unconcernedly, sharply observant, every detail of the pretty interior registering itself on his brain. His eyes were wide apart; nothing in their field of vision escaped; and as they drank in the beauty before them the fighting light died out and a warm glow took its place. He was responsive to beauty, and here was cause to respond. An oil painting caught and held him.”

As Martin Eden is drawn in by the painting—which is, prophetically, a painting of a schooner on stormy seas—the “fighting light” with which his eyes probe the canvas is gradually replaced by the “warm glow” of its intoxicating beauty. In this early scene, London asks his reader to consider the differences between these two modes of reading or looking: you can come to the work like a soldier on the defense, or let the work come to you and wash over you like a wave. As I hold Jack London’s flask, it, like the painting, seems to hold me back, suspending me in my knowledge that the author once held it and used it. Ultimately, a curator’s research relies on both sides of this coin. It’s our job to be dutiful, conducting research with the “fighting light” of a critical eye. But it’s also important to be willing to succumb to the magic of looking and of feeling, to spend time with a piece and allow it to “speak” for itself. To be like the silver, but also like snakeskin.