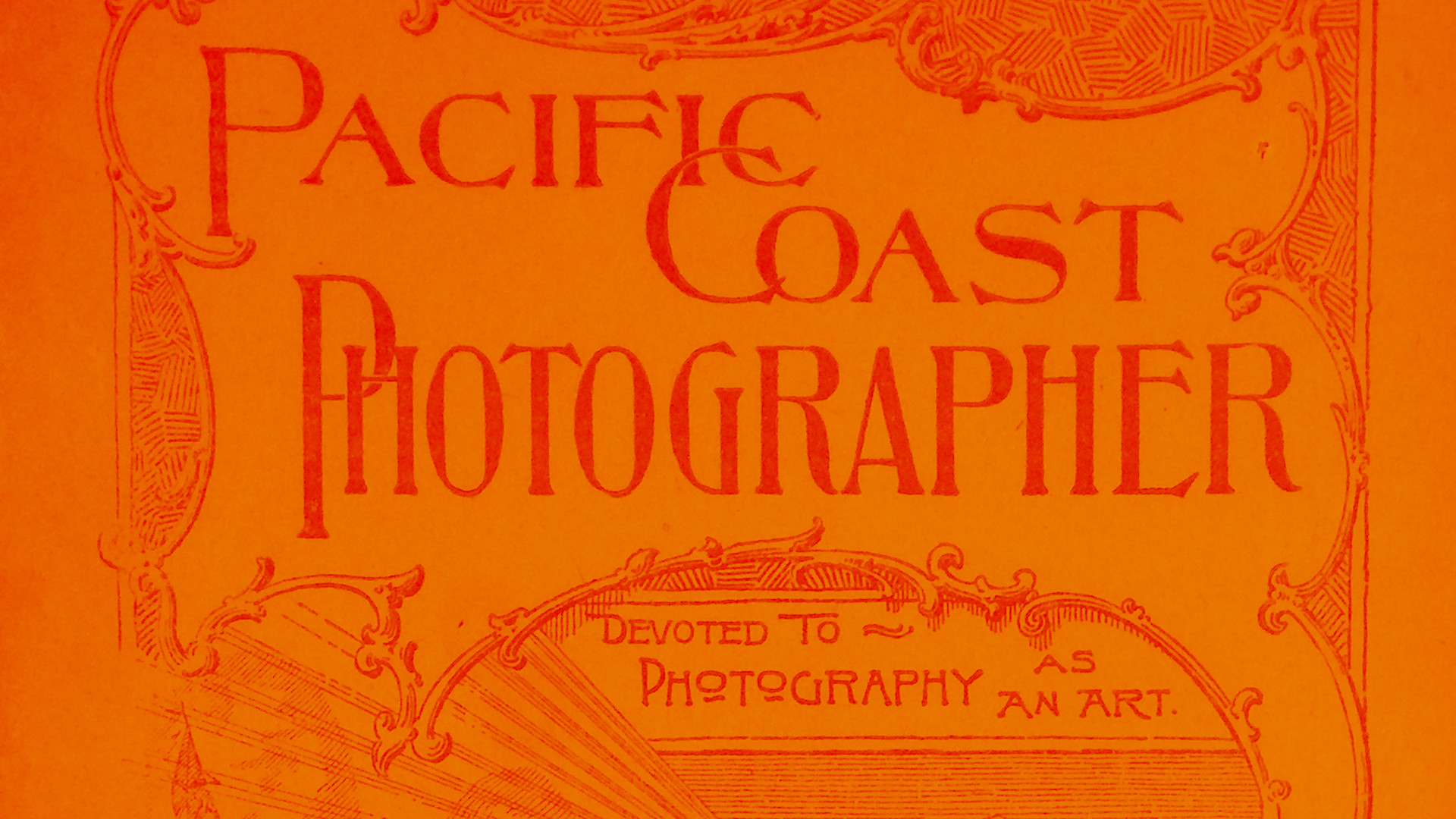 In the Library: Uncovering History, The Pacific Coast Photographer – A Treasure of Early Western Photo History

When Carolin Görgen visited the California Historical Society in 2015 to conduct research for her dissertation on the California Camera Club, she was struck not only by the riches of the photographic collections, but even more so by the wealth of written sources on photography. One item stood out in particular: the complete run of the Pacific Coast Photographer, a monthly publication “devoted to photography as an art,” published in San Francisco between February 1892 and January 1894. Read more about Carolin’s research at CHS below.

I first met Carolin Görgen back in 2015 when she arrived to spend a week at the library exploring the California Historical Society’s photography collection for her dissertation at the University Paris-Diderot and the École du Louvre. A few years later and Carolin, Ph.D completed, came to California once again to start a fellowship at the Huntington Library in San Marino. During that time, Carolin graciously volunteered to give a talk at the North Baker Research Library. Her engaging program, “A forgotten photographer community: The California Camera Club, 1890-1915,” drew on CHS‘s rich collection of photographic prints, magazines, albums, periodicals, and correspondence, to focus on the California Camera Club, a photography club active in San Francisco between 1890 and 1915. Carolin continues to research and write and I am always delighted when an email from her shows up in my inbox as it means more of CHS’s collections will be explored and ultimately shared with the world.

When I first visited the California Historical Society in 2015 to conduct research for my dissertation on the California Camera Club, I was struck not only by the riches of the photographic collections, but even more so by the wealth of written sources on photography. One item stood out in particular: the complete run of the Pacific Coast Photographer, a monthly publication “devoted to photography as an art,” published in San Francisco between February 1892 and January 1894.

This source is especially valuable as it allows us to retrace the activities of a widely unexplored terrain: the vast camera club network that connected photographers along the coast and beyond from the 1880s onward. The driving force behind the magazine was the San Francisco-based California Camera Club, which had been founded two years prior to the first issue. The Club, which united amateur and professional photographers, artists and beginners, would become the largest collective of photographers in the U.S. by 1900 with a rollcall that exceeded 400 members. While histories of American photography have mainly focused on a selection of “master” figures, from Carleton Watkins to Alfred Stieglitz and Ansel Adams, the pages of the Pacific Coast Photographer tell a different story. They reveal the large number of practitioners – men and women – and their shared activities centered around photography, be they exhibitions, excursions, or print exchanges. Thanks to the magazine, substantial portions of this collective work can be retraced by historians today. It is the key to a dispersed archival landscape that stretches from California to the Pacific Northwest, down to the Southwest, and all the way to the East Coast.

In the early stages of my research, the Pacific Coast Photographer provided an inventory of names, activities, and locations for further inquiry. Its publication coincided with the use of halftone printing – a photomechanical printing process which reproduced photographic images as a patterns of dots, thus reproducing a full range of tones. Although the magazine does not include a large number of such reproductions, its contents provide a detailed insight into the breadth of late nineteenth-century photography. Probably the most important take-away from the reading is the diversity of practices in which Californians engaged – a phenomenon that transformed my perspective on turn-of-the-century photography. Far from the “high art” circles we encounter in museum histories of the medium, Californian practitioners would gather in the city and by the Bay for lectures and outings that resulted in annual excursion program to Yosemite by the close of the decade. What is striking is the fluid exchange between amateurs and professionals: while amateurs wrote extensively about composition and chemistry, they were regularly joined by professionals who gave advice on apparatus and commented on the best “picture spots” in the West. Unsurprisingly, many a practitioner’s work could later be found in the pages of Sunset magazine and other promotional literature – thus countering the perception of amateurs as opposed to commercializing their work. The opening editorial of the first issue, fittingly entitled “California for the Photographer,” set the tone for this new form of regional appreciation:

Much has been written, and more said, about the many attractions of the Pacific Coast, and particularly California, and its advantages over the older and less favored States on the side of the great divide. The climate, of course, has had its full share of praise, and to people who have never visited the Golden State, a plain and unvarnished tale has often seemed like a wild exaggeration. […]

So the wild and varied scenery has furnished a rich theme for all descriptive writers, as well as for the brushes of many eminent artists. There is, perhaps, but little that is beautiful or grand in the natural scenery of other portions of the country which cannot be duplicated within the confines of this State, and most of it without making a long journey from any one point. […] I doubt very much if many amateur photographers who are native Californians really appreciate the advantages which surround them in the way of a choice of the best subjects. All sorts of picturesque things can be reached by the minimum consumption of time. Certainly no other large city is favored as San Francisco is in this respect, and it is no wonder that the amateurs of this city have taken so prominent a position among the artistic photographers of the country. […]

Nowhere can be found more beautiful marine views than about the bay of San Francisco and the adjacent coast; nowhere more exquisite cloud and fog effects than can be seen from the hills surrounding the bay and in the neighboring valleys. It is not easy for the most accomplished photographer to do even partial justice to these ever-varying scenes, but it is at least a satisfaction to have such subjects to work upon, even if the highest standard of excellence is not reached. Now that the want of a local journal is supplied, the amateur and professional photographers of California should be independent of the rest of the world, and be as well represented on the literary side, as they have long been in the artistic departments of the photographic art.[1]

By the time that the editorial was published, San Francisco had become the photographic center of the American West. The Chronicle, whose reporters had calculated some five thousand “picture-seekers” across the state, reported on their activities in the monthly “With the Camera” column.[2] The Pacific Coast Photographer provided a platform for this increasing number of practitioners eager to venter out into the landscape with a camera at hand. It published dates for monthly meetings at the Club, invited camera enthusiasts to visit their headquarters, and to make use of the dark rooms and library whose provisions were described in detail.

While Californian photographers of the late nineteenth century – like many painters and writers of the region – actively contributed to the booster machinery of the American West, they also sought to demarcate their production as artistic photography with a unique regional flavor. As practitioners across the nation desired to establish the medium amid the fine arts, contributors to the Pacific Coast Photographer likewise specified their publication was “devoted to photography as an art.” The cover featured a male photographer using a folding camera. From his tripod emerge beams of light which lead towards marine scenes and portraits of women – the championed motifs of artistically inclined photographers. To emphasize the contributors’ awareness of photography as a medium with its own history, the cover included a then well-known woodcut portrait of Louis Daguerre which had adorned the cover of the Daguerrian Journal (1850-1851), the first photographic magazine in the U.S. Next to the portrait, utensils necessary for producing daguerreotypes were shown, underlining the knowledge required for making photographic images. 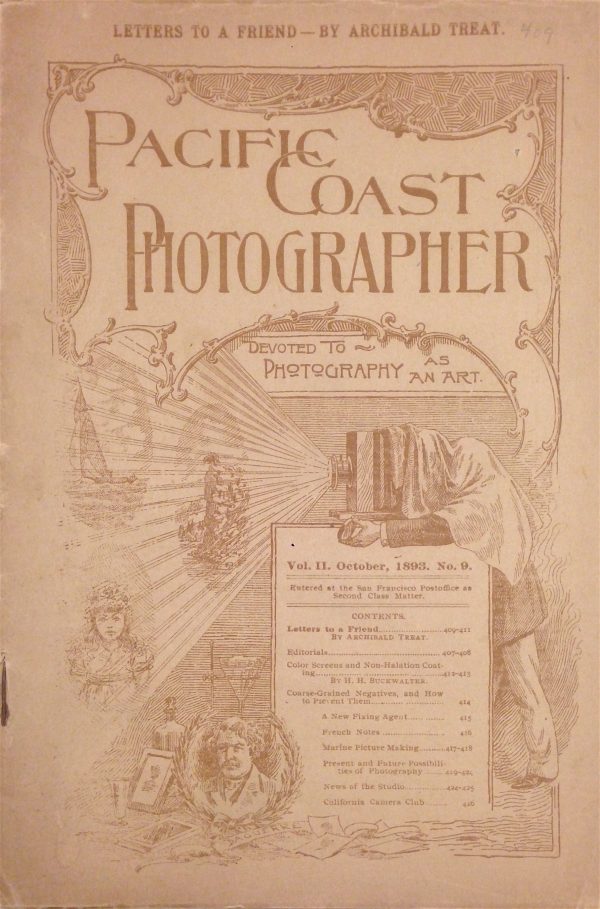 The Club news section inside the magazine was similarly illustrated. Next to a tripod, camera, and shoulder bag (used for practicing outdoors), several prints of marine and mountain scenery are shown, echoing the club’s favorite destinations for jaunts to Land’s End and Mount Tamalpais. A large lens reflects a California grizzly marching along railroad tracks against a setting sun. The combination of the bear, the railroad, state scenery and climate illustrate the importance of regional appreciation in the Club’s practice.

While the Pacific Coast Photographer was a short-lived endeavor and would later be replaced by the much more well-known Camera Craft (1900-1942), it is a precious historical source for numerous reasons. First, the pages of the magazine provide detailed documentation of an understudied period, practice, and region in American photography. Second, its contributors developed a shared vocabulary on photographing Western landscapes, and thus represent a valuable extension between the “master” figures Watkins and Weston; their collective outlook on photography complicates our understanding of Western art as a lone endeavor in the vast out-of-doors. Third, as history-writing of nineteenth-century San Francisco is oftentimes dictated by the rupture of the earthquake and fire of 1906, the Pacific Coast Photographer includes precious information as to the social, cultural, and economic development of the city’s art scene.

As a photo-historian and scholar of the American West based in Europe, I would recommend the digitization of this treasure.

My dissertation, completed in 2018, covers the history of the California Camera Club between 1890 and 1915. It is written in English and available online via the following link:

In my research, I aim to appreciate the variety of archival objects (prints, albums, lantern slides, magazines, catalogs, correspondence) which constitute camera club photography around 1900. See my recent article in Interfaces:

I am currently revising my dissertation manuscript for publication with a North American academic press. I am happy to get in touch with scholars, historians, and local residents about the riches of California photography collections.

Carolin Görgen is an historian of photography and the American West. She recently obtained her doctorate from the joint PhD program of the University Paris-Diderot and the École du Louvre. Her thesis focused on the California Camera Club, the largest collective of photographers in the U.S. in 1900. She is currently working on a book manuscript of her dissertation. Her research has been supported by the Terra Foundation for American Art, the Huntington Library, the Beinecke Library at Yale, and the Peter Palmquist Memorial Fund. Since 2016, she is the co-organizer of the seminar Camera Memoria at Paris-Diderot that focuses on histories of photography from the English-speaking world. She recently contributed to the upcoming exhibition Earthquake 1906: The Photographs of Arnold Genthe at the Legion of Honor Museum in San Francisco.