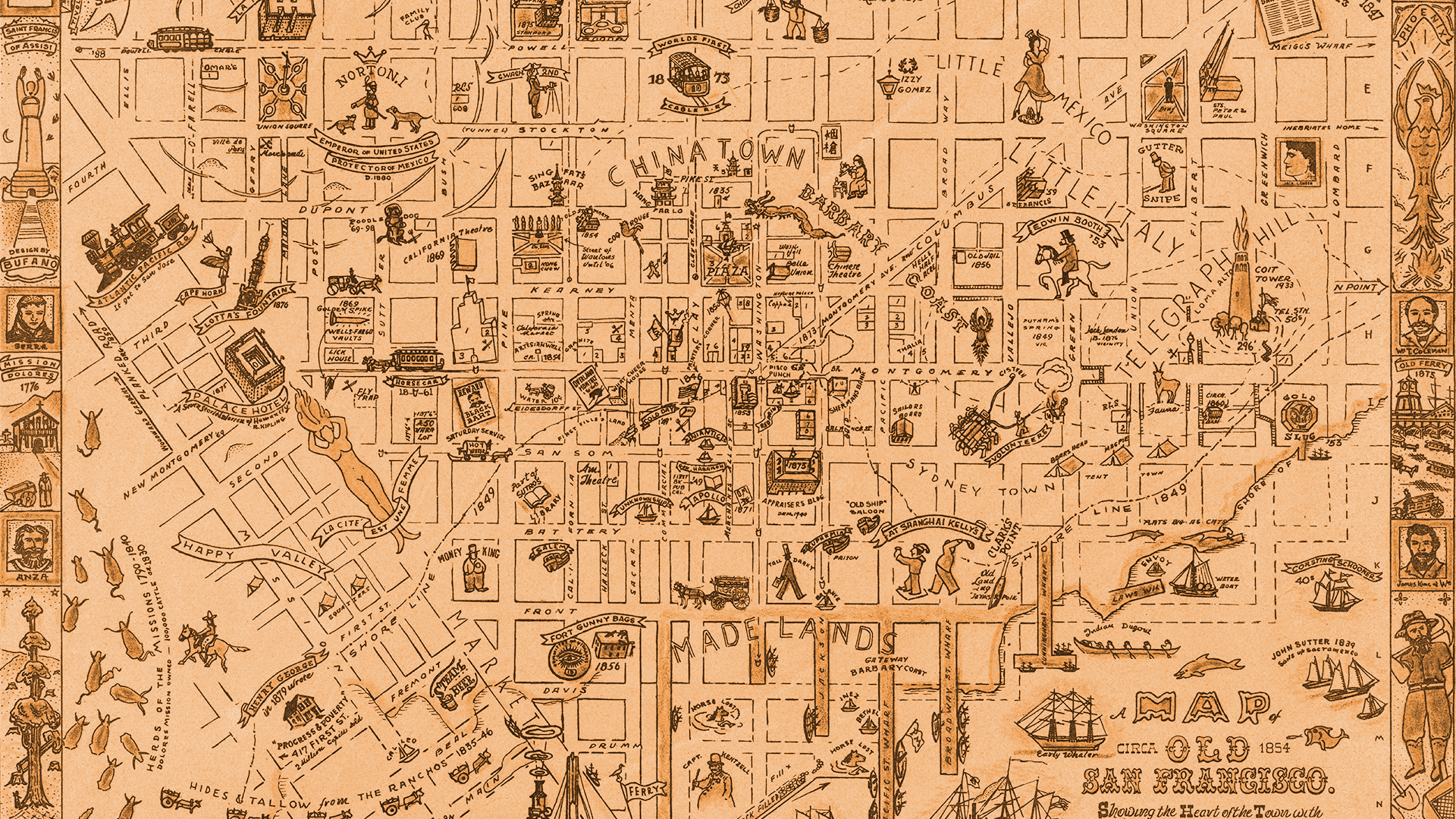 Every year, hundreds of people—students, academics, writers, filmmakers, genealogists, historians and people simply interested in history—come to the North Baker Research Library at the California Historical Society looking for answers to their questions. They know that somewhere in the CHS vaults there may be a letter or a photograph that contains the information they are seeking, or a clue that will lead them to a new and perhaps different path.

W have been posting pieces from different writers about their experience—what they were seeking and, in particular, what they discovered. Without them, and without the thousands of manuscripts, photographs, maps, books, periodicals, and ephemera that make up the CHS collection, how many California histories would remain hidden, out of sight, and perhaps out of mind? We collect history so that each generation can examine and learn from these valuable primary sources.

Most collections are not accessible right now. Shelter-in-place requirements from COVID-19 have meant all staff are working from home and the library is temporarily closed. But there will be a time when it reopens. And when it does, these invaluable collections will all still be there, ready and waiting for people to come and make their own discoveries. In the meantime, we hope that you are inspired by the stories of researchers who dug deep into the CHS archives. They will be sharing their finds with you in these posts.

Thanks to the meticulous work of CHS’s map cataloger, Phil Hoehn, over the past five years these maps in CHS’s collection have been preserved and described, and their records made publicly available. This is how Jim Schein, a rare map specialist based in San Francisco, found out that the CHS holds several original illustrated maps by little-known mapmaker Ken Cathcart. Schein’s discovery of the maps in our archives helped complete his long-term research project on Cathcart’s life and work. These maps, and their story, are thankfully no longer hidden.

Inspiration for the book’s subject matter, San Francisco mapmaker and photographer Ken Cathcart (1902–1985), came to me and my business partner when we purchased his archives in 2004. Following Cathcart’s death in 1985, his landlord cleared out his house, intending to take everything straight to the city dump. Fortuitously, a neighbor intervened and stored it all for twenty years. Then, knowing that we would be interested in the acquisition of Cathcart’s archive (we run Schein and Schein, a rare map shop in North Beach), he contacted us about this lifetime’s worth of photographs, drawings, and maps, which in turn sparked what turned into a long period of research on Cathcart’s life and work.

It took more than a decade to wade through this massive accumulation of more than five thousand creative resources and works to fully realize what we had, which in turn led to more concentrated research into Cathcart’s maps and their meanings, and the eventual writing of my book. Along the way, in 2016, we published a reissue of Cathcart’s 1947 San Francisco Chinatown and Environs map as a lithograph for sale at our store. It was derived from an artist’s proof (reflecting a non-final state of the manufacturing and printing process) in a very dark sepia tone, which we hand-watercolored, then scanned and Photoshopped a bit to create our modern reissue.

Cathcart arrived in San Francisco in 1937, notably at the same moment as other great mid-twentieth-century San Francisco artists such as Don Kingman, Robert Stackpole, and Dorothea Lange and her husband, Maynard Dixon, all of whom lived and/or worked in or around the old Montgomery Block building, 628 Montgomery Street, the site of the present Transamerica Pyramid. Cathcart aspired to become an author, but paid the bills by working commercially as a promoter and photographer. He quickly immersed himself in San Francisco and California history. Notes in his archives indicate that, with respect to his maps, he was proud of the accuracy and depth of his research as he worked to “clarify or rectify” history and its errors or fallacies.

We discovered that he used his photographs as research support, in combination with interviews with locals, to get context for his map imagery. He had a great regard for historic places in San Francisco, and we discovered how his photos directly influenced his highly stylized, hand-drawn maps, which he created to announce and explain the local stories he collected. Known as illustrated, animated, cartoon, or “good-natured” maps, they were a known style for promotions in the twentieth century. His maps endeavored to excite the viewer about history, and they still succeed in doing this today.

Our fragmented impression of Cathcart gained solidity and nuance over our decade of research into his imagery, stories, life, and the seven hand-drawn maps and 3,500 photographs he left behind. Gold Mountain, Big City explains that story, but it excludes a very interesting part of the greater tale. Our constant search for further items, images, or anything related to Cathcart had been drawing a blank. In twelve years I had found only a single copy of one of his seven maps, and that was at the Mechanics’ Institute Library. The photographs in his archive show that he hung out and researched there, and that he likely gifted them a framed map that today remains on their walls. Finally, further review of his papers showed that he also used the archives at the Bancroft Library at the University of California, Berkeley, and at the California Historical Society. We finally thought to check if CHS had anything and whoa Nellie! Did we hit it big!

Reference staff confirmed the 2017 cataloging of some maps from the archive by an experienced volunteer, and although the digital images weren’t yet available online, the titles included at least one map by Kenneth Gwin Cathcart. Additional contact with CHS staff determined that they had several items related to our subject, including an original issue of the map our book is based on. CHS kindly located the maps so that we could come and review them in person. We did just that and had an exciting day. CHS’s hand-colored issue of the San Francisco Chinatown and Environs map, with the archaic coloring likely done by Cathcart himself, confirmed the color choices we’d made on our reissue of that map, and also showed details not included in our published copy, as ours had been derived from an incomplete artist’s proof. Both the artist’s proof and the CHS issue are included in our book.

CHS also had three (!) other Cathcart maps for which we own the master lithographic plates (the photo plates used in the final printing process) and determine copyright, but had never seen a completed issue of outside of our own collection. One was a hand-colored map of old buildings of San Francisco circa 1848–1946, reflecting the situation downtown from the days just before the Gold Rush through the great earthquake and fire, right up to the period of “twentieth century progress,” in which many old buildings were demolished and replaced with new. Another is a San Francisco cable car history map, with a lithographic run in yellow and blue (providing the outline of the drawings and some context for color choices) We even found an “author’s issue”—a rare and perhaps unique issue of a map, with variations from the original, with an inscription defining it as a special author’s edition—which was a map I had only ever seen on my computer, as again no copies had ever been found, just the lithographic plate. This map was hand-watercolored and inscribed personally by Cathcart to a patron of CHS with a dedication to her and the CHS organization at large. It is among the most special of his offerings. A very personal copy.

Seeing these great maps with their interesting, important subject matter and attractive icons extended our knowledge of the mapmaker and his work relationships. They were like a flood of affirmation after the years of speculation about Cathcart’s maps and the reasons for their creation. CHS’s holdings were so important in the validation of our professional history of Cathcart and his maps.

But the best was yet to come. CHS had one more important item: a firsthand article by a San Francisco Chronicle columnist that is to our knowledge the only written record of someone’s experience with Cathcart in person. In 1947, Robert O’Brien wrote in his newspaper column, “Riptides,” a nice profile of Cathcart. We believe it was an accurate firsthand account, as it nailed and solidified what up to that point had been hypotheses extracted from photographs and historical archives. As we read O’Brien’s articulate summing up of Cathcart and his quirks, it was uncanny to realize how correct our guesses had been, even though those guesses were rooted in good research, knowledge of human nature, and deductive reasoning. Aside from the late neighbor from whom we bought the Cathcart collection, we’d never interacted with anyone who knew the man in person. It was an amazing confirmation—and a remarkable piece of historical ephemera.

We are so grateful for the CHS and their archive, staff, and volunteers for the historical continuity and preservation they dedicatedly provide, which allows so many events, research projects, and publications to transpire so successfully. I am presently working on my next book, this one about Cathcart’s 1946 Old California map of 1810–70, which I am researching extensively at CHS. I expect I will be hanging around the archive quite a bit either virtually or in person, when we can again, in 2021.

I hope you’ll review the Cathcart photo collection at our website, ScheinandSchein.com (click on “Photo Collection”). You can browse all 3,500 images from Cathcart’s collection, plus another 2,000 from my own, organized by topic/genre and neighborhood.

Ken Cathcart’s maps, as well as other maps from the CHS collection, are available for viewing at CHS’s digital library.