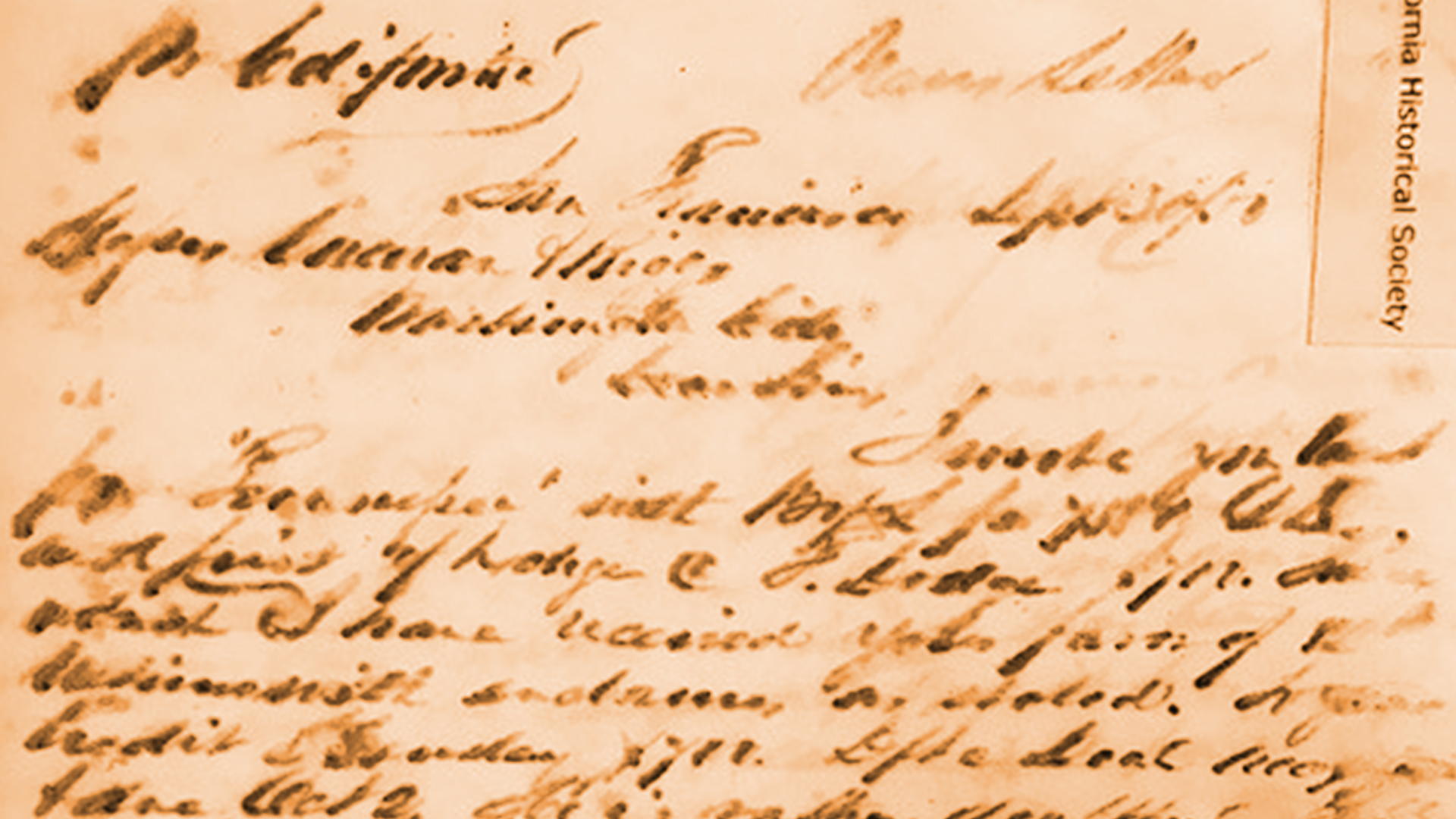 In the Library: Uncovering History, Golden Treasures at the North Baker Research Library

Each week we will post a piece from a different writer about their experience—what they were seeking and, in particular, what they discovered. Without them, and without the thousands of manuscripts, photographs, maps, books, periodicals, and ephemera that make up the CHS collection, how many California histories would remain hidden, out of sight, and perhaps out of mind? We collect history so that each generation can examine and learn from these valuable primary sources.

The North Baker Research Library at the California Historical Society, pre-Covid-19, has always been open to the public without appointment. Reference staff never really knew what each researcher would be looking for and what each day might bring. It was always exciting when something that had not been seen before was requested. With over 4000 manuscript collections in our holdings, this could easily happen. When Jonathan Tiemann came in to the library looking for materials related to banking during the Gold Rush, he uncovered rare documents that were new to both of us. He spent hours painstakingly photographing, enhancing, and transcribing handwritten business correspondence from an 1850 letterbook of James King of William, gathering clues from that—and other collections—until he was able to turn his findings in to articles, and his articles into a book project. I have to thank him for introducing me to this complicated chapter of California history.

About three years ago I started a research project into banking and finance during the California Gold Rush. This work is part of a larger effort to think about money and banking in an historical context. I settled on the Gold Rush in the hope that the ways banking developed during that unusual time would provide interesting insights—and vignettes—and that the colorful characters from that period would liven up what can otherwise be a pretty dull subject.

At about the same time, my daughter Amelia was finishing a paper on jazz legend Miles Davis for a labor history course at Bard College in upstate New York. The research for her paper took her to manuscript collections at the New York Public Library, where she had the thrill of holding Davis’s signed recording contract with Columbia Records. Her success with that research showed me something of both the value and the excitement of primary sources, and I began to search for archival material that could advance my Gold Rush project.

With the aid of the excellent Online Archive of California, I discovered the manuscript collection at the California Historical Society’s North Baker Research Library. During the Library’s open hours, I was able to walk in (without any type of appointment), register as a researcher, and with the help of research librarians Frances Kaplan and, at the time, Marie Silva, begin exploring the treasures sleeping in the CHS’s manuscript vault.

And what treasures I encountered! The 1855 diary of Sacramento banker Francis Page, describing his unenviable task of picking up the pieces after the failure of his father’s bank, Page, Bacon & Co.— the largest in San Francisco at the time. An 1850 letterbook containing file copies of banking correspondence of the singularly-named James King of William, who later came to prominence as a crusading newspaper editor, and ultimately fell as a sort of martyr. Letters and business papers of Faxon Dean Atherton, who traded with San Francisco merchants from his base in Valparaiso, Chile, before he finally moved to San Mateo County in 1860. A handwritten draft of a pleading by Henry Halleck, later a Civil War general, before the California Land Commission regarding a boundary dispute concerning the Rancho de las Pulgas, which extended from Menlo Park to San Mateo. A signature book of Adams & Company, by far the dominant express carrier in Gold Rush California, containing the original signature of the great-great grandfather of one of my friends. Business papers of Jacob Leese, who in 1836 went into business as Yerba Buena’s first American merchant. An 1851 lease, with map, for mining rights to a parcel at Mariposa, written in a fine hand on heavy parchment and bearing the signatures and seals of John C. Frémont and Philadelphia newspaper publisher Solomon Alter, among others—and possibly a fraud. Complete financial documentation for an 1846 voyage organized by San Francisco merchant William Howard to assemble a cargo of cattle hides and ship it to Boston for sale there.

[Note from the author: In the mid-19th century all business correspondence was hand-written but diligent business people keep archival copies of their correspondence. King’s approach was to take a letterpress book—a bound letter-sized book of onion-skin paper—to preserve archival copies of his business correspondence. Once a page was written it would be placed, ink still wet, between leaves of the letterpress book, and the book would be closed on it. The verso side of the leaf on top of the letter would then take up a reverse image from the wet ink on your original. The direct image becomes readable from the front side of the thin, onion-skin leaf.]

My research at the North Baker Library took its most interesting turn the day Ms Silva placed on my table a box of materials and said, “You have to see this.” She had brought me an archive of the business papers of William A. Leidesdorff, probably the most important, and the wealthiest, merchant in pre-Gold Rush California. It seemed at first a curious grab-bag of letters, ledgers, daybooks, and handwritten financial instruments. It took me a while to begin to tease out the historical secrets it held.

I had set out to study business during the Gold Rush, but now I had in hand documents illuminating business in California before the Gold Rush, while California was still part of Mexico. This was the economy of the ranchos and the pueblos, where cash was scarce and cattle hides—“California bank notes”—functioned as money. It was the California economy Richard Henry Dana, Jr. described in his 1840 classic, Two Years Before the Mast. Leidesdorff kept some of his accounts in dollars and cents, some in Mexican pesos and reales, some in terms of barter transactions, and some in hides. The papers trace Leidesdorff’s trade up and down the Pacific coast of California, as well as business with other merchants in Yerba Buena; a merchant named Juan Paty, who traded between Oahu and Monterey; and even Russian fur traders, who came down from Sitka to buy supplies in California.

My favorite gem in the Leidesdorff Collection is the item that illustrates this note. It is a check—“Pay to the order of…”—dated June 24, 1843, by which A. B. Thompson directed Leidesdorff to pay 200 hides to the order of Mr. James Watson. Watson, in turn, endorsed the check to a Captain Clapp, whose acknowledgement on the reverse of the check shows that Leidesdorff paid him the 200 hides.

The Leidesdorff Collection gave me the material for a chapter in my manuscript on early California banking and finance. They are also at the heart of another academic project. I had the good fortune last summer to visit Oxford University, where I made the acquaintance of Prof Chris McKenna, an economic historian there. Based largely on the Leidesdorff material, Chris and I have developed a case study, for classroom use, as part of his series on the Global History of Capitalism. The California Historical Society has graciously agreed to allow us to use images of several of items in the Leidesdorff Collection.

Primary source research in manuscript libraries can be a bit intimidating at first. True, it’s more involved than just borrowing a book from your local public library. The materials are irreplaceable, and some of them can be fragile. But the research librarians like Ms Kaplan and Ms Silva, who manage researchers’ access to these wonderful resources, are not trying to keep them out of sight. Like anyone else, they want to show off their collections to people that appreciate them, and they rely on researchers to discover and highlight the items of greatest significance. Treat them, and the materials in their custody, with the respect they deserve, and they can open windows of discovery.

Dr. Jonathan Tiemann, co-founder of Tiemann Investment Advisors, has more than 30 years of investment experience, which include nearly a decade in academia and now more than twenty years managing money and designing investment services for families and individuals. He earned his B.S. in Applied Mathematics from Yale University, an M.S. in Operations Research from Stanford University, and his Ph.D. in Finance from Yale University. His background in Finance is mostly mathematical, but in recent years he has become increasingly convinced of the importance of history to our understanding of our economy and our financial system. He is currently writing a book on banking and finance in California before and during the Gold Rush based mainly on primary sources, many of which are in the manuscript archives at the California Historical Society. He has given a variety of talks based on his research, for both academic and general audiences. In cooperation with the director of the Global History of Capitalism project at Oxford University, he has also developed a case study, for classroom use, based primarily on materials in the Leidesdorff Collection at CHS. He was to travel to Oxford in June to teach the case there, and hopes to be able to re-schedule that trip soon. Dr. Tiemann has written extensively on a variety of topics related to finance and investing. For a short paper based on the Leidesdorff Collection, click here.  One of his longer papers, also developed as part of his Gold Rush research, argues that the Crimean War contributed to the collapse of Page, Bacon & Co., San Francisco’s largest bank, in 1855. It is here. And this brief paper, from an earlier stage of his research, explores, through the lens of monetary history, some of the events leading up to Shays Rebellion in Massachusetts in 1782.