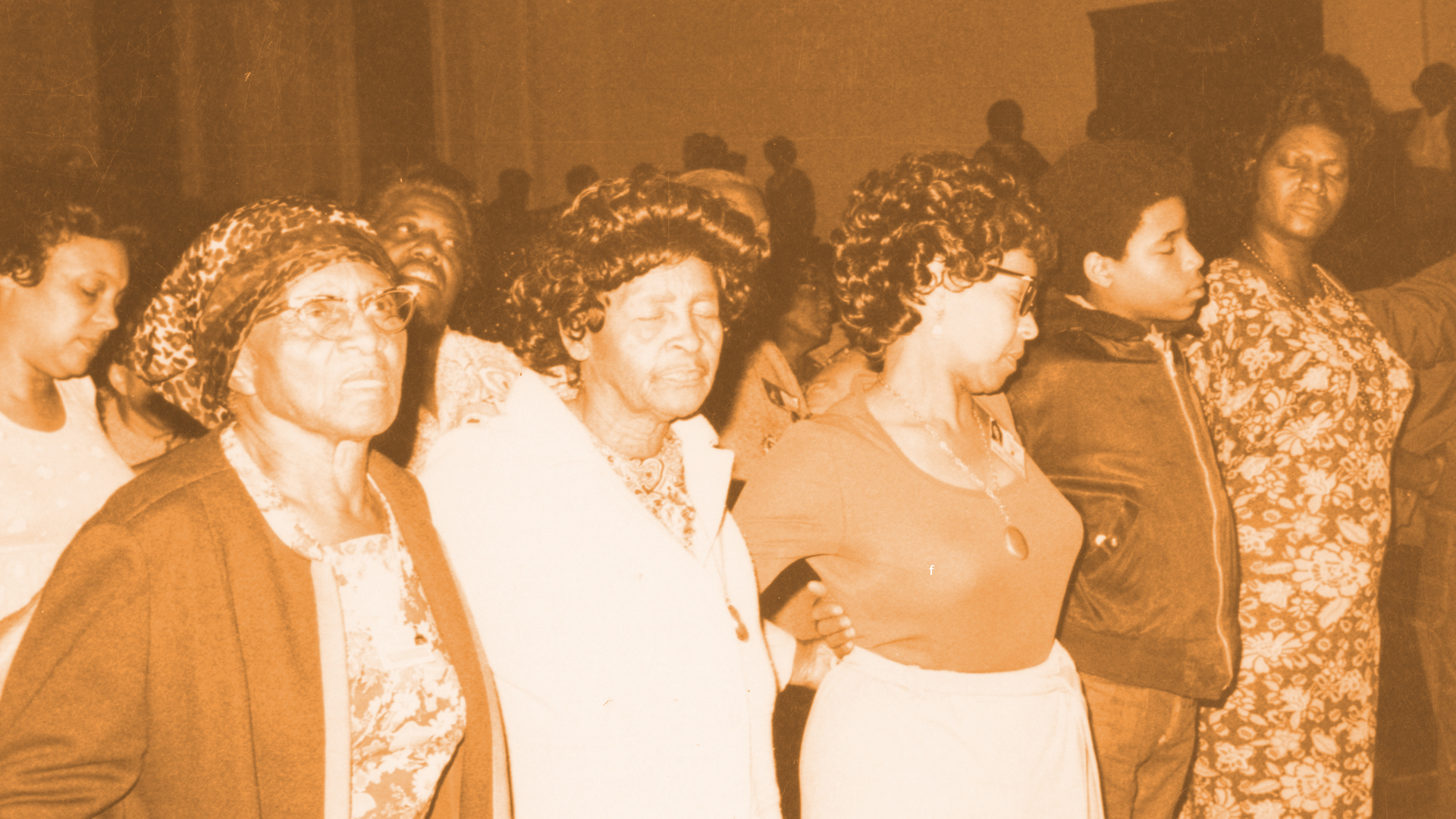 Working on the Peoples Temple photographs and some of the textual material gives one a glimpse into the ideal that was sought from its conception. Perhaps you come upon a beautiful child taking a stroll in the jungle at Jonestown, discovering a flower and pausing for a moment to consider it and hold it with care. Some observers like to fixate on the end, but sometimes forget to consider or question the beginning and the ensuing journey. What impetus drove this engine?

There is a church a block away from where I live. I go there to visit a tree. One of its branches has descended upon the earth, bending heavily from its weight; a forked stick helps support it and hold it up. I also go there to see a spirit mural. It is a beautiful mosaic of a white-tailed dove crowned with what I imagine is intended as a symbol of the holy spirit. Some may interpret it a phoenix rising. Its tail spreads across four columns of the church, spawning various symbols—hearts, shells, angels, and my favorite, a couple – the silhouette of a man and a woman. My idealist self places her fingers on the shadowy figures and yearns, wishing for these symbols to materialize into existence. This idealist yearning, this ideal is something like the glimpses of paradise that I see in the eyes of the believers in Peoples Temple, particularly in the photographs of the children, the dancers, and the older women who believe in the possibility of healing, of all races coming together as a unit under the banner of love.

What is Peoples Temple? Difficult question. Difficult and perhaps impossible to answer. The more you learn about Peoples Temple, the more questions begin to multiply and answers become hazy. Working on the Peoples Temple Publication Department records, a project funded by the National Historical Records and Publications Commission (NHPRC), has provided me with some insights into this important time in history. It’s worth keeping in mind the context of the photography prints–they were designed to serve the Publications Department’s purposes including fundraising, church member activities, public relations, and community outreach.

Working on the Peoples Temple photographs and some of the textual material gives one a glimpse into the ideal that was sought from its conception. Perhaps you come upon a beautiful child taking a stroll in the jungle at Jonestown, discovering a flower and pausing for a moment to consider it and hold it with care.

One might come upon an image of a troupe of African American dancers in exuberant dress, striking a pose with raised fists, a symbol for Black power. Their youthful energy electrifying you and making you remember what it was like to yearn for equality, making you still yearn for it like the dream lives on.

Then there is the look that the woman at church gives her pastor, in whom she places her complete trust. So what if he is forged from another clan, another color? He has embraced you and accepted you and welcomed you in this space that you believe is your new home. Your history is a heavy tree branch that needs holding up a bit.

Some observers like to fixate on the end, but sometimes forget to consider or question the beginning and the ensuing journey. What impetus drove this engine? We cannot dismiss the importance of symbols and the meaning they carry in our frail vessels. We yearn for community and company. The photographic prints and textual material in the newly processed Peoples Temple Publications Department records are a testament to such yearning. Whether one considers the tragic end, regarding it as a warning not to trust those who claim benevolence and promise protection then betray such a trust, or whether one suspends their disbelief and allows the yearning to take hold through the eyes and deeds of the beholder, one may catch a glimpse of paradise. A glimpse of paradise in the sense that, look—it can be all simple, we can all work together under the same roof, share the same land and space, dance to the same drum beat. Yet this simple thing eludes us continually so we are always just catching glimpses of what could be.

But … what if we were to reframe the question? What if we were to temper our idealism with a dose of realism? As I was contemplating the Peoples Temple after processing the photo prints, a play titled Tetecan: An Aztec Tragedy, from another of CHS’s collections caught my eye in the vault. I opened it to the foreword, which besides some anachronistic observations on the Aztecs, had something interesting written there:

“Each of us in his destined hour, in hope or extremity, mounts the steps of idealism. In all times and places, fervid youths have climbed in search of idealism, driven upward by sight of the seething plain of life across which the light of brotherhood appears at times to burn fitfully. Too many of them have climbed in vain.”

Sometimes the young of spirit desire to undo the imperfect system that keeps the light of brotherhood from burning with a peaceful flame. We dare give birth to hope and begin to climb the mountain of idealism, leaving the plain of life behind; almost obliterating it and starting anew with our own thoughts, on our own terms, seeking like-minded people. We want paradise on earth, now. We tire of waiting for elusive promises. This, however, can be a dangerous proposition. Humans are imperfect beings embedded with foibles and faults, often drawn to extremes. Often reacting to others’ extremes—from greed to idealism. The lessons imparted to us in the narratives of the Peoples Temple and those who seek to explain the church are often extreme, understandably mirroring such narratives. But what about the lessons imparted in the brief glimpses of the promise of paradise the eye may draw from some of the photographs? Can anything be extracted from these? Even if there’s a strong possibility that some of it was curated to fit the purpose of publication?

I think there is something important to be extracted from these brief glimpses. I think part of the lesson lies in contemplating the extremes, sure, but also, considering the journey in between, the fissures where love was let in. This is a quiet journey that involves reflection, pause, and silence.

Processing the Peoples Temple photo prints was something we took our time with. We sleeved some of the larger prints, housing them in new folders while keeping categories labeled by the publication department or creating new folder categories if they reflected a theme such as with the “African Dancers” folder. For some of the smaller prints such as passport photos or member photos we opted to house these in envelopes to keep them from falling from their folders…. I wanted to contain the photographs as if I could contain the spirit of the lives reflected there. I wanted to keep a level of privacy and respect to Temple members photographed even though their lives have become very public. Sometimes it’s the smallest details that show people we care.

The Peoples Temple photographs give us glimpses of a paradise the youth in us has yearned to see. But did many of them climb in vain? I like to think that the climb was not in vain. I like to do a challenging thing—to turn from the sensationalized end and pause a bit to study the faces of the people whose life held meaning and the potential for a longer, better life. The idealist in me keeps searching for these glimpses, hoping they bloom and multiply and one day materialize like during my yearning by the spirit mural. The realist in me, however, reminds herself to also temper such yearning given the nature of man and its excesses. It’s a challenging task—to both acknowledge the end, to grasp the fitful yearning of utopia so as to temper it and prevent it from happening again, but also to not forget the fissures and glimpses of paradise where life and love seeped through.

A finding aid for the People Temple collection can be found here.