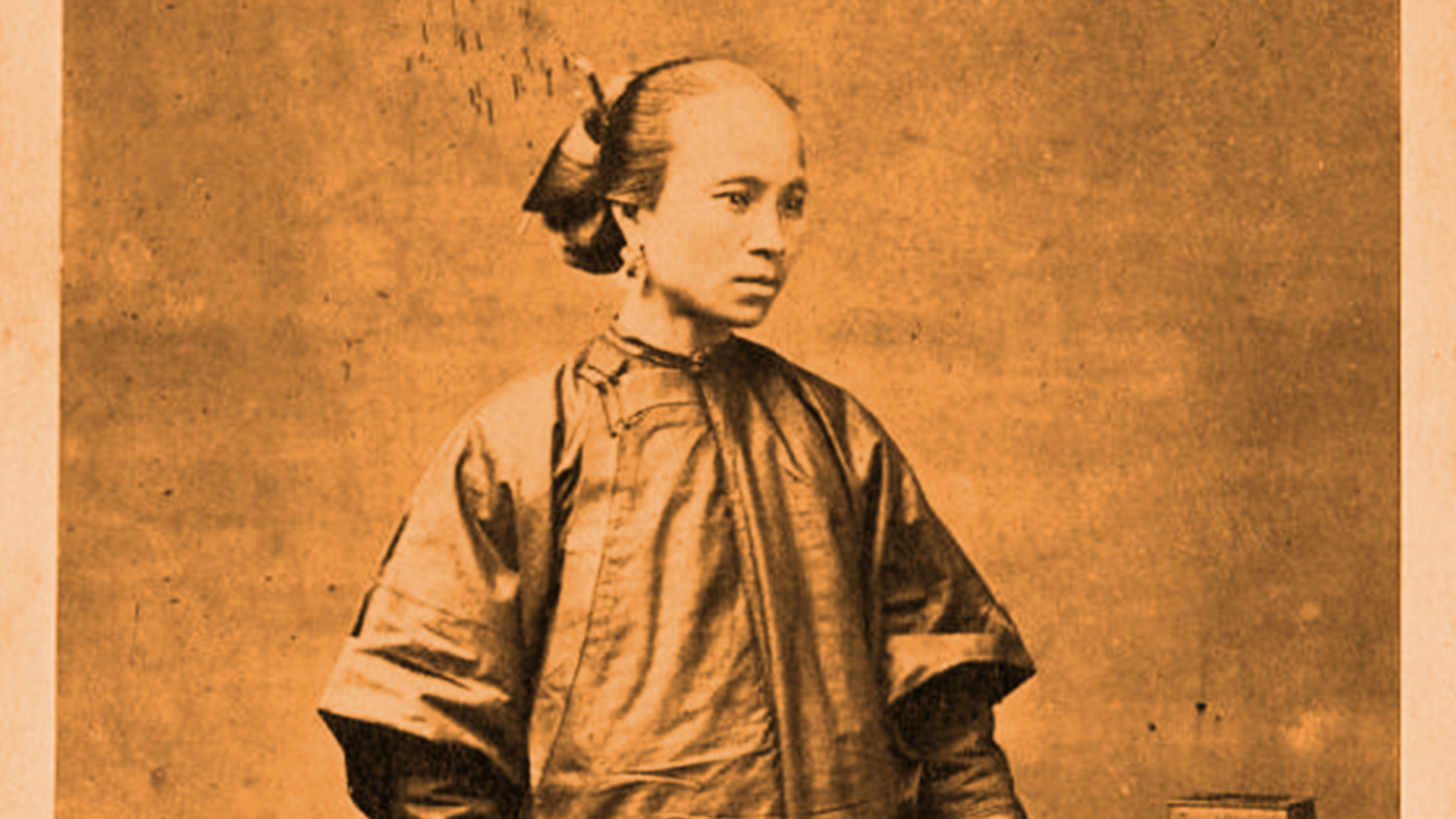 From the Archives: Chinese Likenesses from San Francisco Portrait Studios

The California Historical Society holds a number of portraits of Chinese sitters at San Francisco photography galleries taken between the 1860s and the 1890s. Typically showing ordinary men staring directly into the lens, or women looking slightly off-camera, they provide a striking contrast to the many troubling images of Chinese people that were produced in early California.

Rising anti-Chinese sentiment reached a peak in the 1870s with an economic crisis that exacerbated the perception that Chinese laborers were a threat to white working-class livelihoods. The politics of Sinophobia can be traced in the late nineteenth century illustrated press, where derogatory depictions of Chinese people were pervasive. The San Francisco Illustrated Wasp, for example, frequently printed grotesque caricatures to accompany racist screeds.

The broader visual record of Chinese people in early California is thankfully more extensive and varied. Photographers like Isaiah West Taber, Arnold Genthe, and many others took their cameras to San Francisco’s Chinatown to photograph the place and its inhabitants. Of course, their photographs present Chinatown and its people as these non-Chinese photographers saw them—sometimes against the wishes of their unwitting subjects.[1]

How did Chinese people in early California see themselves at a time when mainstream culture openly maligned them? Studio portraits provide a proximate if imperfect record of how they might have wished to be represented. Though sitters had limited control over certain details, portrait studios offered a predictable product: a dignified image of the person in front of the camera. If the number of surviving portraits is any indication, it was a fairly common practice for Chinese men, and sometimes women, to pay to have their portraits taken at San Francisco studios.

The city had more than its share of portrait studios, and most of them were set up along Montgomery and (later) Kearny streets, just blocks from Chinatown. As early as the 1850s, several Chinese portraitists were also doing business in the city.[2] In the 1860s, photographic innovations, such as the ability to make several exposures on the same glass plate negative, reduced the price of portraiture and transformed studios into volume businesses. Some had separate rooms so as to host several clients at once. Customers would get a dozen or more cartes de visite (business-card-size prints mounted on cardstock), which they could trade with friends or associates.[3]

Mass production and fierce competition between establishments made it bad business for photographers to discriminate against paying customers, no matter their race or social standing. The result was that, in San Francisco’s studios, Chinese sitters found themselves in the same settings as bourgeois patrons. Art historian Anthony Lee notes the incongruity:

Imagine a Chinese laborer in Vance’s studio, walking between ladies sitting and toilet rooms, past the lace curtains and beneath the huge chandeliers. . . . Even as the writers of the Annals described the Chinese as cowardly, servile, and ill-suited to the social order, the city’s new photographers happily invited them into the studio and the imaginary spaces where that order found one of its most ideal expressions.[4]

Plush carpets, silk drapes, and carved wood furniture suggest a well-appointed nineteenth-century domestic interior—a fancy approximation of the kind of home white middle-class patrons either inhabited or strived to inhabit. For the Chinese laborer, imagining oneself the occupant of such a space was certainly aspirational. Lee writes, “Though it would be too much to suggest that the sitters regularly saw their lavish surrounding as anticipatory of citizenship (or even fair treatment), I cannot help but think that in a vague and not wholly conscious way, some did.”[5] For all patrons, but especially for the Chinese, the portrait studio was a place to try on an enhanced identity.

The pretense and staginess of the studio is perhaps most evident when a balustrade or column appears unconvincingly in front of a painted backdrop. Symbols of the monuments of Western civilization, these architectural elements seem only to emphasize the foreignness of the Chinese sitter. But some studios outfitted their galleries with settings specifically designed for their Asian clientele. Several cabinet-cards (approximately four-by-six-inch prints mounted on board) in the CHS collection from William Shew’s Pioneer Gallery picture opulently dressed Asian sitters with the same set of props—an intricately carved wood table, a porcelain footstool, and a vase with flowers. From the Chinese-style pergola in the painted backdrop to the stack of books imprinted with Chinese characters, everything about these portraits seems meant to denote the sitters’ high status, educational attainment, and cultural refinement.[6]

Did Chinese portrait gallery patrons request surroundings that created the illusion (however transparent) of being in China—even as Shew’s gallery mark clearly placed them in San Francisco? Perhaps. In Shew’s long career, spanning more than half a century, from 1851 to 1903, he would have witnessed changing attitudes about the people who lived and worked in Chinatown. Following the 1882 Chinese Exclusion Act, which halted new immigration from China, Chinatown increasingly became its own bubble within the city, and whites began to aestheticize Chinese people and culture. When Chinese patrons had their pictures taken, Shew’s Pioneer Gallery and other photography establishments likely added the portraits to their stock of salable images of celebrities, politicians, and performers. It is easy to imagine that the inclusion of Chinese visages in a photograph collector’s album would have added something particular about San Francisco. Thus, these Orientalized portraits seem to represent a sort of bargain wherein the sitter obtains an ennobling image of themselves while submitting to the exoticizing projections of the dominant culture.

[1] Consider for example Arnold Genthe’s photograph No Likee, in Old Chinatown: A Book of Pictures by Arnold Genthe, with Text by Will Irwin (New York: Mitchell Kennerley, 1913), 99.

[6] For a discussion of William Shew’s career and clientele see Wendy Cunkle Calmenson, “‘Likenesses Taken in the Most Approved Style’: William Shew, Pioneer Daguerreotypist,” California Historical Quarterly 56, no. 1 (1977): 2–19; “The First Photographer in San Francisco and Some of His Early-Day Patrons,” San Francisco Chronicle, May 3, 1903.