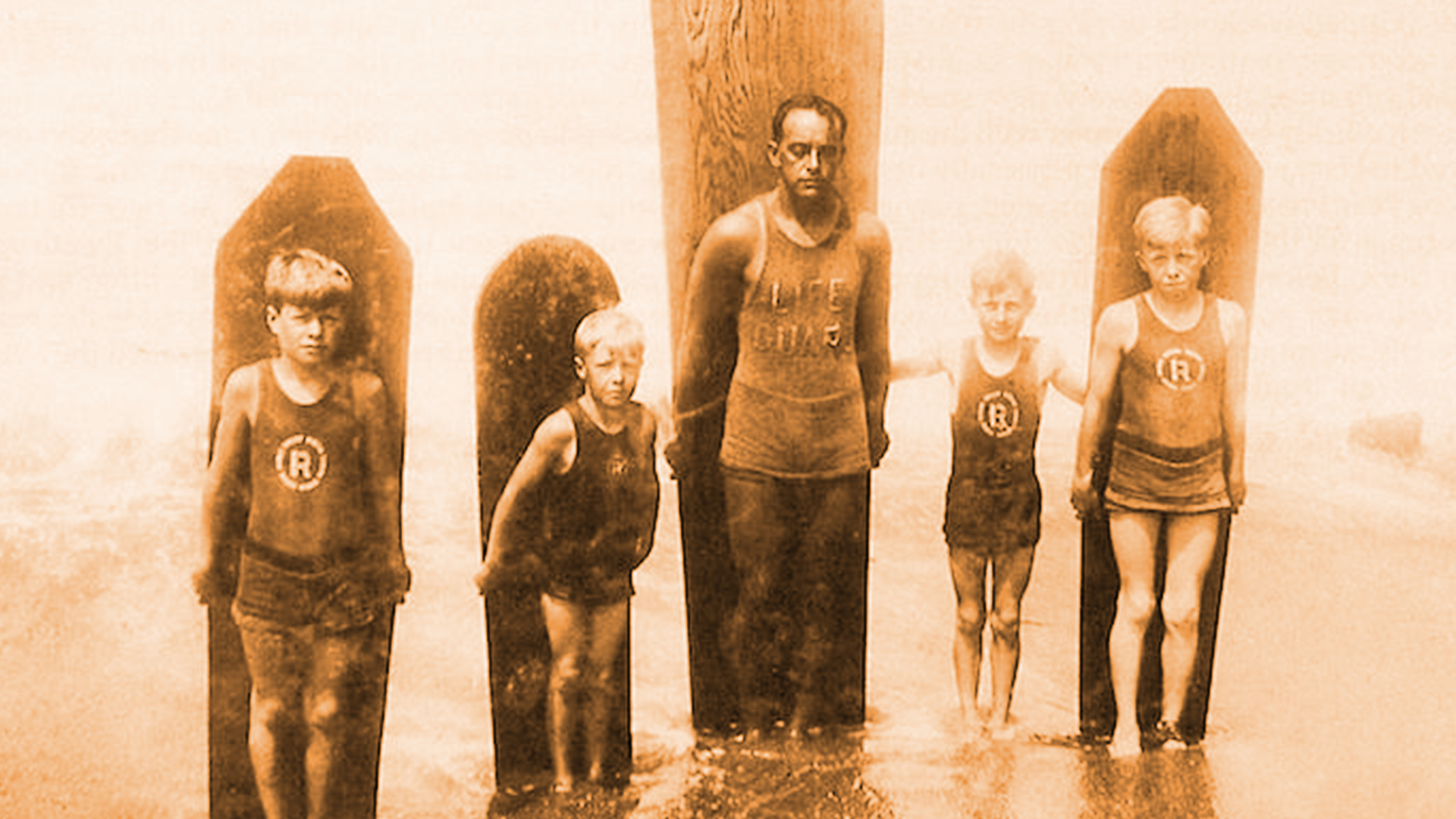 Guest author Erik Skindrud discusses a California surfing pioneer, his connection to the flu pandemic of 1918-1919, and how that time, in some ways, mirrors our present situation.

A Redondo Beach news item 108 years ago this summer constitutes an unheralded landmark of West Coast history – likely the first recorded instance of women surfing on the U.S. mainland.

“These girls are probably the only women in the country who ride the surf board,” the item in the July 14, 1912 Los Angeles Times related. “Judging by their perseverance they mean to master the feat or die in the attempt.”

One of the surfers in the article, world-renowned swimmer Dolly Mings, was coached by Hawaii-born George R. Freeth, who is also featured in the Times story. Freeth rebirthed modern surfing in Hawaii – then transplanted it to Southern California in the years leading to World War I.

It was an innocent time of hijinks and pushing boundaries. Mings would appear in a Mack Sennett Keystone comedy a few years later.

Freeth was famous for a 1908 rescue in which he plucked close to a dozen fishermen from storm-tossed waters off Venice beach. Today he is considered a pioneer of modern lifeguarding. In “Latest Style in Life Saving,” another Sennett short, he shows off advances like the rescue buoy and portable respirator.

Freeth was tan and taut – a picture of the surfer-lifeguard that would soon be emblazoned on the popular imagination. Watching him ride waves at Waikiki in 1907, writer Jack London called him “a young god with sunburn.” 1.

But Freeth wasn’t into lifeguarding for money or girls. He served as volunteer – scraping rent from gigs as pool attendant and surfing demonstrations at Redondo Beach, Huntington Beach and elsewhere – funded by Pacific Electric Railway’s Henry E. Huntington.

Freeth’s life’s work might be summed up as turning lifesaving into lifeguarding. The latter is proactive – aimed at preventing disasters as much as rescuing those in distress. In this, he was part of a progressive public health movement then underway. Other landmarks of the decade included the U.S. Public Health Service (1912) and the first U.S. school of public health at Johns Hopkins University (1916).

Freeth’s financial outlook improved as the U.S. entered World War I. He found work in San Diego, where multiple drownings were claiming servicemen. “By the summer of 1918, Freeth was at the top of his form” with a steady paycheck, Arthur C. Verge writes in the summer/fall 2001 issue of California History.

But Freeth’s heart and lungs, which had pulled hundreds from the surf, couldn’t beat what National Institutes of Health’s David M. Morens and Jeffery K. Taubenberger a century later would dub “the deadliest event in human history.” 2.

Following an initial wave in spring 1918, a bigger, deadlier surge of “Spanish influenza” bore down that autumn. In January 1919, a final wave struck – with Los Angeles and Southern California especially hammered.

State and local officials clamped down with quarantine and face mask orders with penalties attached. In San Diego, police nabbed so many without masks that “the city jail was filled to overflowing with offenders,” the Santa Ana Register reported Dec. 12. Fines were stiff — $10, about $150 today.

Residents chafed under what the Los Angeles Times called “the obnoxious measure.” When Pasadena’s face mask ordinance expired – residents celebrated with a bonfire. “Passing motorists… slowed down to drop their face coverings in the flames,” the paper related, “which leaped higher and higher as the celebration progressed.”

Freeth fell ill on Jan. 15. By March he was recovering, but at month’s end was in Agnew Sanitarium. Ludy Langer, who would win silver at the 1920 Olympics at Antwerp, visited his sick coach and mentor. “He was very ill and didn’t say much,” Langer recalled. “(But) once or twice I got a smile out of him.”

Doctors transferred Freeth to San Diego’s St. Andrews Hospital, where he died April 7. He was 35.

The pandemic of 1918-19 was unusual in affecting younger people in higher rates than other influenza strains. Young men in the 20-45 age range succumbed in large numbers. Some experts today attribute this to a “cytokine storm” that has the virus turn immune systems against healthy, resilient bodies. 3.

Uncertainty remains, however. A 2007 Journal of Infectious Diseases paper by Morens and colleague Anthony S. Fauci, concludes that “causes of death in 1918 (were) similar to those during other pandemics; most fatalities had secondary pneumonias caused by common bacteria.” 4.

Fauci today is director of the National Institute of Allergy and Infectious Diseases, the nation’s top infectious disease expert and most recognized face on the President’s coronavirus task force.

Morens and Fauci note that the high death rates among healthy young people in 1918-19 remains “surprising.” The big question, they say, is whether younger pandemic victims succumbed to the influenza virus itself or to secondary bacterial pneumonia. Freeth’s illness – which extended close to three months – fits the latter scenario.

Among other curiosities associated with the 1918-19 pandemic is the unique pattern of waves – a pattern “unlike all previous and subsequent pandemics,” Morens and Fauci write. Three distinct waves struck over a nine-month period – with the second wave most severe. All waves were separated by weeks of low activity and were observed across the globe. In this regard, it will be interesting to chart COVID-19’s arc – so far, peaks and low-activity periods vary considerably by country.

The two experts, however, did not address severe acute respiratory syndrome viruses like SARS-CoV-2 – the virus that causes COVID-19. They also did not include shifting public attitudes towards government and science in their equation. People a century ago certainly chafed at mask orders – but today’s noncompliance may rise to new levels.

Erik Skindrud is publications director at the Hospital Association of Southern California in Los Angeles. He grew up surfing in Huntington Beach.