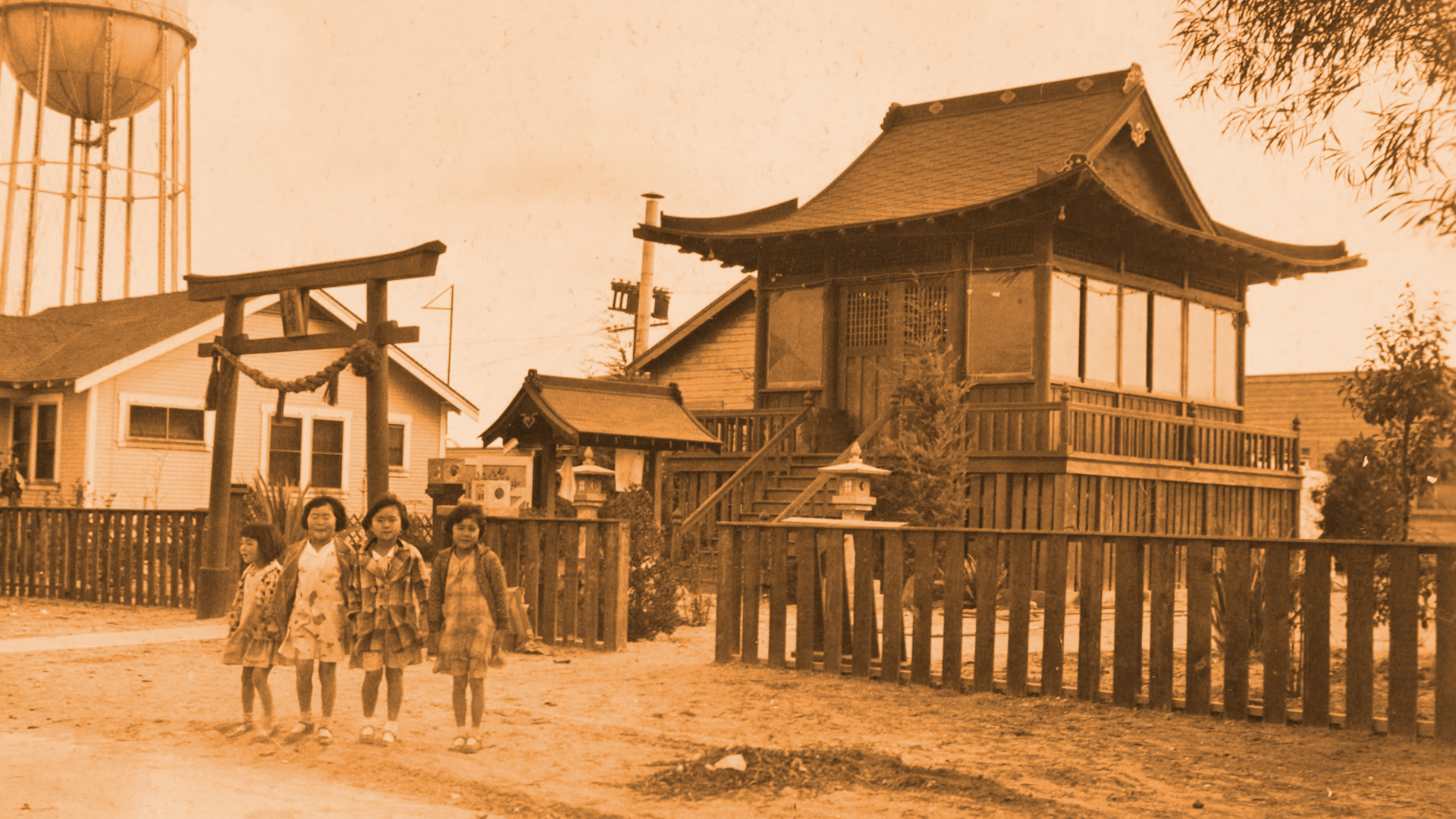 One such set currently in production addresses the CA History-Social Science standard for Grade 11 United States History and Geography dealing with issues of Continuity and Change in the 20th century.  In this lesson, students will examine who came to the United States at the end of the 19th and early 20th century, why they came, and what their experiences were like when they arrived.

This photograph of three little girls in front of a temple was taken on Terminal Island in 1932 by Anton Wagner, a German Ph.D. student intent on documenting the geographical history of Los Angeles for his dissertation.  Whether intentional or not, Wagner captured a snapshot of Terminal Island’s residents at a distinct time in history – a time when it was home to nearly 2000 first generation (Issei) and second generation (Nisei) Japanese Americans. Featuring young children, Japanese architecture, alongside quintessential California craftsman houses, with a large water-tower and power lines looming in the background, this photograph speaks volumes about California at a particular point in time.

The vast majority of Japanese immigrants to the West Coast of America arrived between 1885 and the early part of the 19th century, taking advantage of Japan’s newly relaxed emigration laws to seek economic opportunities abroad. California’s Japanese population was at first predominantly focused on Northern California, with many finding work as farm laborers in rural areas like the Sacramento Valley, or in a community created within a city, such as San Francisco’s Japan town. Within a couple of decades, however, Los Angeles County – experiencing an economic boom first sparked by the railroads – became the most populous Japanese settlement in California with the 1920 census listing nearly 20,000 residents.

Situated between Long Beach, San Pedro, and Los Angeles, Terminal Island was originally a mudflat named “Rattlesnake island.” It was renamed Terminal Island in 1891 by the owner of the land, Los Angeles Terminal Railway. In 1899, the first Japanese immigrants settled there, and by 1910 a thriving community of fisherman – many of whom came from the same prefecture in Japan – and their families were involved in every aspect of the industry, from operating the boats, to working in the canning factories, to owning stores. In her article on Terminal Island for Densho Encyclopedia, Lilian Takahasho Hoffecker writes that it became “essentially a Japanese village on American soil.”

This life on Terminal Island ended abruptly in February 1942, when President Franklin D. Roosevelt signed Executive Order 9066, ordering all Japanese and Japanese Americans to incarceration camps selected by the United States government. Given only 48 hours to prepare to leave, the community on Terminal Island were the first on the West Coast to be removed by force, losing their homes, their livelihoods, and their community.

One decade after Wagner took this photo, the Issei and Nisei community on Terminal Island ceased to exist. During and after internment, Japanese and Japanese Americans on the West Coast experienced deep economic loss as a result of their exclusion and mass removal.  Much of the land that they had lived and worked on before the war was taken over by other immigrant and working communities, especially in southern California.

This image, and several more like it, serve to help high-school students in California understand the history of Japanese Californians, and to position California as an important hub in immigration history in the twentieth century.