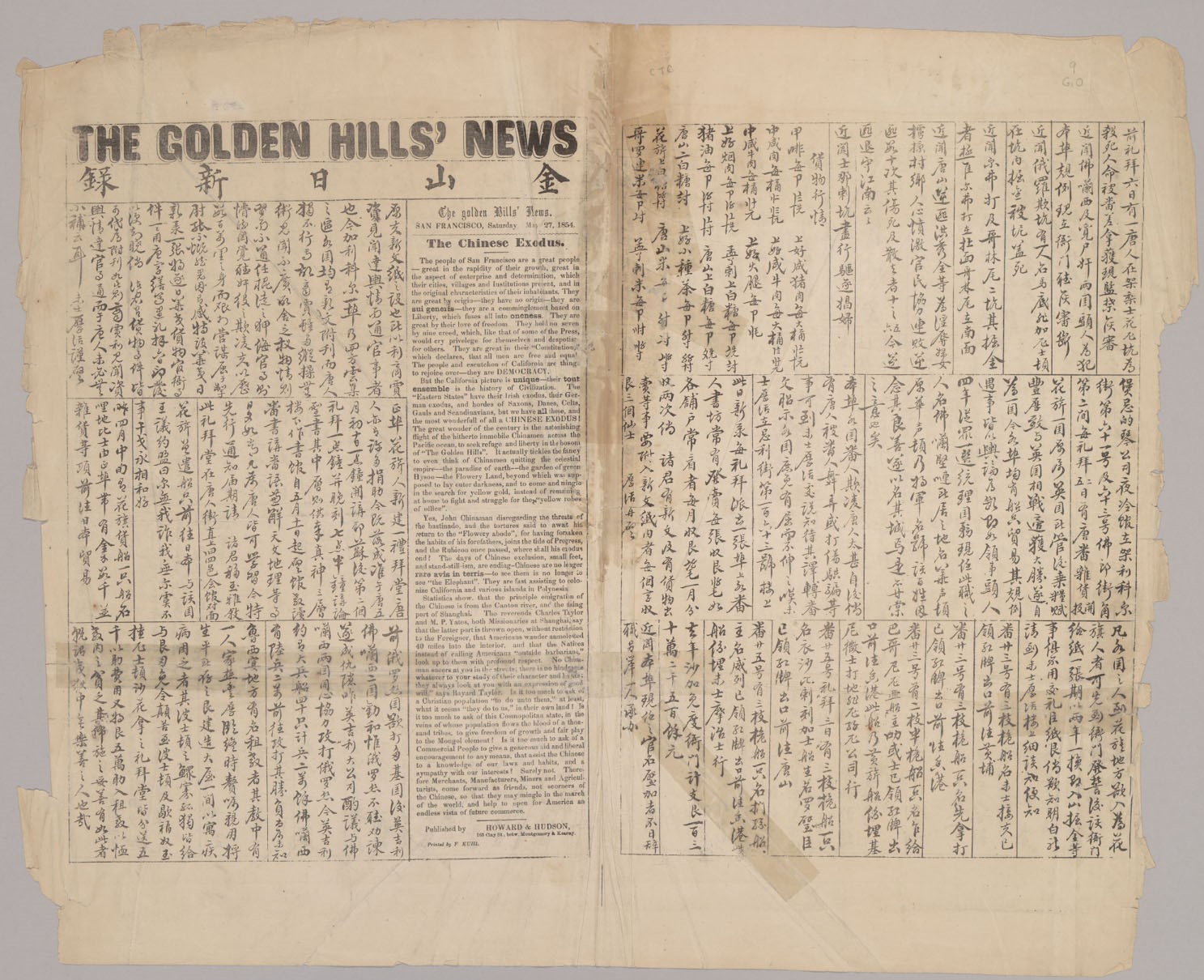 By Erin Garcia and Frances Kaplan

This May we celebrate Asian American and Pacific Islander (AAPI) Heritage Month with a feature on the Golden Hills’ News, the first Chinese-language newspaper published in the United States. The paper advocated for the enfranchisement and inclusion of Chinese people in US society.

Shown above: Front and back pages of the Golden Hills’ News, May 27, 1854. California Historical Society (PER Golden Hills)

San Francisco publishers Howard & Hudson launched the Golden Hills’ News, the earliest US newspaper for Chinese readers, on April 22, 1854, to serve Chinese merchants who provided supplies to gold miners. The weekly was written in English and Chinese, with brush-drawn characters running in vertical columns from right to left.1 The Golden Hills News advocated for Chinese rights, open trade, and open immigration.

The front page of the May 27, 1854, edition features Cantonese and one column of English text. The publisher’s welcome note in English extolls California’s Gold Rush–era diversity: “The ‘Eastern States’ have their Irish exodus, their German exodus, and hordes of Saxons, Danes, Celts, Gauls and Scandinavians, but we have all these, and the most wonderfull [sic] of all a CHINESE EXODUS.” The column continues its tone of inclusivity in the name of a commercially prosperous future: “Merchants, Manufacturers, Miners, and Agriculturists, come forward as friends, not scorners of the Chinese, so that they may mingle in the march of the world, and help to open for America an endless vista of future commerce.”

CHS is grateful to Roland Hui, an independent historian based in San Francisco, who translated the Chinese portion of the newspaper to English. What follows are excerpts from Hui’s translation:

The purpose of publishing a newspaper is to promote commerce, provide knowledge, convey public sentiments, and communicate government regulations. Now, California is the meeting place of people from all over the world, and various countries have published their own newspapers except the Chinese. Therefore, although there are many Chinese merchants, they lack the skills to run their businesses, have limited general knowledge, and are powerless to make decisions. They do not fully understand business conditions, and are easily manipulated by tricksters; they are ignorant of government regulations, and are bullied by those with evil intensions. It is a pity that they, despite having years of experience, are struggling in their business and facing so many obstacles. This has prompted me to start this Golden Hills’ News, and use the Chinese language to describe daily happenings about Chinese and American business and government and legal affairs. It will be published every Saturday, so that people will know what is going on. If you have business news, we can advertise it here. That way, business will flourish, knowledge will expand, public sentiments will be felt, and government regulations will be understood; and to the Chinese this is by no means a small benefit. – Mr. Howard

In this city, barbarians of different nationalities bully the Chinese too much. From now on, if a Chinese is harassed, beaten, or cheated, he can report it to Mr. Howard so an English notice can be translated and sent to all countries. Chinese do not have to suffer mistreatments in silence. Mr. Howard is located at 163 Clay Street, upstairs.

People from different countries who come to America and wish to become Americans can first go to court and take an oath. The court will issue a paper which can be renewed every two years. With that they can go to the hills to dig gold and do other things without having to pay for a license. If you wish to learn more, please visit Mr. Howard upstairs for a more detailed discussion.