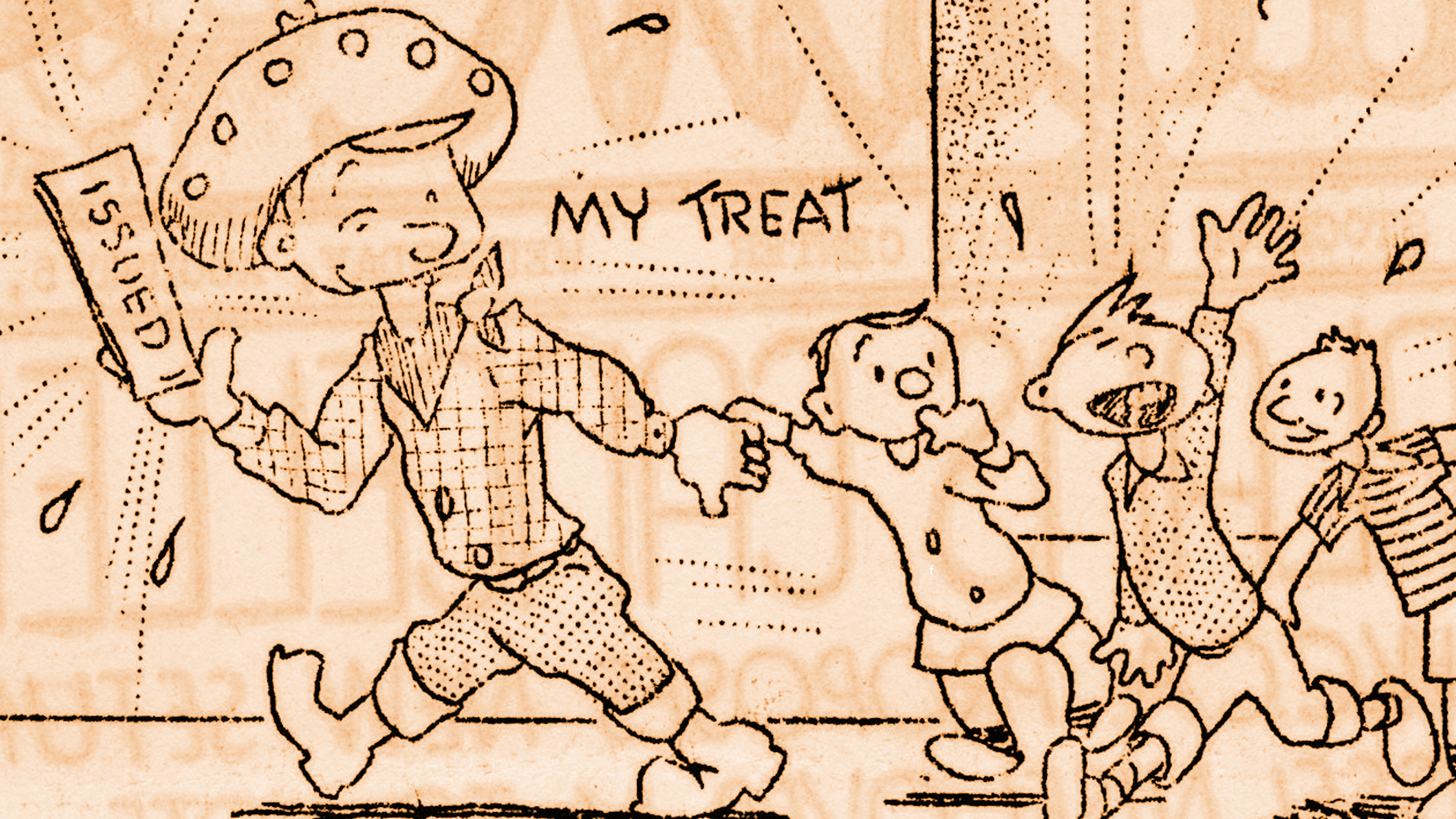 Dig into El Joaquin, a newspaper published in the Stockton Assembly Center during Japanese incarceration. The editors of the newspaper seem to take great pains to tread the line between boosting morale–in the face of a racist policy that used war as an excuse to force Japanese citizens and residents out of their households–and appeasing the people who were incarcerated, perhaps in the attempt to ensure their safety.

Children’s Voices in the Archives is a series of posts brought to you by CHS’s North Baker Research Library.
Reading through the historical newspaper issues of El Joaquin is a strange experience. El Joaquin was a newspaper published in the Stockton Assembly Center during Japanese incarceration. This was considered a ‘temporary detention center’–such centers or concentration camps as called by others were used from late March, 1942 until mid-October, 1942. The El Joaquin newspaper issues in CHS’s collections have a run from May 1942 to the Final Edition, September, 1942. It was published every Wednesday and Saturday by the El Joaquin Press, W.C.C.A. Assembly Center, Stockton, CA. Single copies were delivered to each ‘apartment’ free of charge.

The editors of the newspaper seem to take great pains to tread the line between boosting morale–in the face of a racist policy that used war as an excuse to force Japanese citizens and residents out of their households–and appeasing the people who were incarcerated, perhaps in the attempt to ensure their safety. In the first Volume (issue no. 1) one gets a sense of the appeasing tone the editors use to try to get everyone to cooperate: “However, our personal frustrations must be shelved temporarily for an undertaking which requires each individual to cooperate with his fullest and best effort” (p. 1). This appeal seems at once appeasing yet subversive. Why subversive? Let me explain.

The same Volume 1 (no. 4) introduces us to Pancho, the newspaper mascot. Pancho is a toothy El Joaquin staff character: “Little Pancho represents the spirit of the Center. He is Patient, Active and Neighborly, Courteous, slap-Happy and Orderly” (an acrostic for his name).

On closer study, little Pancho has an interesting backstory the reader may peruse in the El Joaquin Final Edition (page L3). When the newspaper staff discover little Pancho “perched pertly on the Art Editor’s desk” toting a huge sombrero with “patches of hair showing underneath” the staff writes that upon more close observation of this “mysterious object… we noticed that there was a face and even a body beneath the hat. ‘Hey,” we shouted, “What the ____.”

When they ask Pancho what he is doing there, Pancho replies, “Why… you know me. I helped develop the lands around here. I raised beets, celery, grapes, potatoes, and even carrots. I’ve been a doctor, lawyer, farmer, merchant, laborer and a scholar. You’ve seen me around — everywhere. I came in when the evacuation order was issued, because I had to” (Final Edition, L3). The staff notes how their adopted mascot then leaps gracefully from the table to the right-hand corner of the front page with a cry of “Let it roll.” The story of Pancho within the pages of El Joaquin begins a subtle subversive thread of a character who is resilient and ready to take on the immense burden of captivity with an industrious spirit.

But the subversive hint doesn’t end here. Remember–the El Joaquin newspaper had to, by the nature of the people’s captivity, be tame since the captors and hired staff of administrators and center’s workers could read its contents. In the issues I reviewed, I didn’t find the significance of the name “El Joaquin.” I wondered if there was more to it than being emblematic of San Joaquin County, the center’s county location in Stockton. It turns out there may be more history there. Upon speaking with library staff at the San Joaquin County Historical Society and Museum, the special collections staff thought that at first glance the newspaper was just named after the county. However, when the staff spoke with the Education Director, he mentioned that according to local lore the name has historical significance for one of the following reasons:

The newspaper was named after Joaquin Murrieta, a symbol of resistance.

Joaquin Murrieta was a “legendary bandit who became a hero of the Mexican-Americans in California” during a time when Yankee miners pressured the legislature in Sacramento in 1850 to pass the Greaser Act and the Foreign Miners Act with the intent to drive out Mexicans (Encyclopædia Britannica). According to lore, Murrieta or several “Murrietas” responded to the oppression by “leading bands of outlaws that raided up and down the San Joaquin and Sacramento valleys, robbing gold miners and holding up stages” (Encyclopædia Britannica). Murrieta reached a symbolic status as a freedom fighter that has “long resonated and provided a powerful symbol of resistance for Chicano activists” (Encyclopædia Britannica). Could this resonance be the motive for the re-branding of El Joaquin Newspaper by the editors? Remember there is power in naming. Is it a reach to say that the branding of El Joaquin Newspaper by the editors was a subtle act of resistance? A way of reminding us of the historical implications of racist laws meant to favor one group over another and undoing it by capturing the original spirit of a Mexican migrant who wanted to settle with his bride in California?

Researchers must read between the lines and sometimes history is completely hidden from records and/or passed on as oral history. It’s hard to discover the “truth.” Remember the echoing lines, “Why… you know me. I helped develop the lands around here. I raised beets … even carrots. I’ve been a doctor, lawyer, farmer, merchant, laborer and a scholar. You’ve seen me around — everywhere. I came in when the evacuation order was issued, because I had to.” If the Japanese community saw themselves as Americans, they saw themselves as the traditional ideal of what Americans aspire to be: a helping hand, a laborer, a farmer, an intellectual. Whatever circumstance they are forced into, that ideal rises to meet the massive ‘challenge’ (an understatement in this context). Words are well but don’t always convey their true meaning. So we keep reading between the lines and between bodies’ gestures and actions.

What terribly complicates this captivity and the extent to which the captive can object, resist, or openly rebel are, of course, the children. Imagine if you were a parent under captivity. Imagine what you would do if you were forced out of your home and told that you and your children had to stay in an assembly center until further notice not knowing what will happen. What would you do?

The people at the Stockton Assembly Center and the newspaper staff got to work immediately– organizing a nursery school; training Boy Scouts “the value of serving their communities” (A8, Final Issue); informing the “centerites” mothers that infant care would be provided as the dreams of the people were crushed when they were told they were being relocated to another new facility dubbed the “Arkansas project” (Final El Joaquin issue).

From church activities (Buddhist and Christian), to playing chess, performing Nisei symphonies, writing bittersweet poetry and humorous drawings, and setting up school lessons by dedicated volunteers serving as teachers in the center, the people of the Stockton Assembly Center arose to a difficult situation by uniting and organizing to make things work and to protect the children.

When I say that reading El Joaquin is a strange experience I mean to reflect upon the strength of the human spirit–how we meet captivity by doing what we’ve always learned to do–laughing at ourselves; caring for the children and ensuring that their minds and bodies keep active (I’m thinking of the Girls’ All-Star Teams noted in the Final Edition); dancing with “shimmering hues of brightly colored kimonos” (Vo. II, No. 2); informing our community of the latest developments through print and word of mouth–this is what a resilient and resisting people do. One may ask the bold question: What else can you do when you hope that the lives of the children will continue and maybe even thrive despite the trauma of captivity.

History repeats itself but it need not. We can learn from our costly mistakes and those of our ancestors. We can grow wiser and be better humans. We can resist. We can protect each other if we unite and raise a cry of protest against injustice.