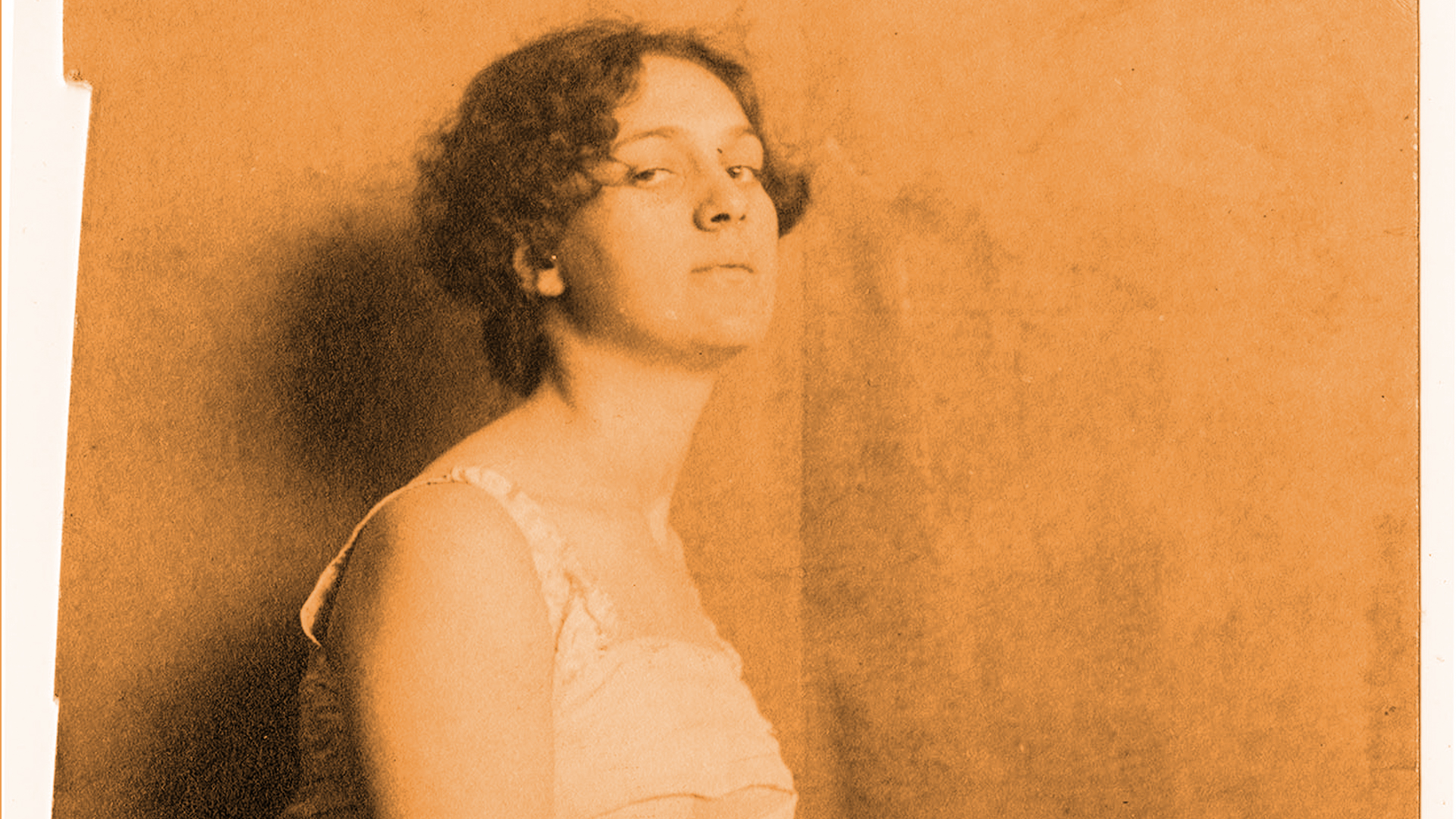 National Library Week is April 4-10, 2021. The chosen theme, “Welcome to Your Library,” promotes the idea that libraries extend far beyond the four walls of a building – and that everyone is welcome to use their services. In this week’s blog, California Historical Society staff pick some of their favorite items from the CHS collection and discuss why they find them interesting. 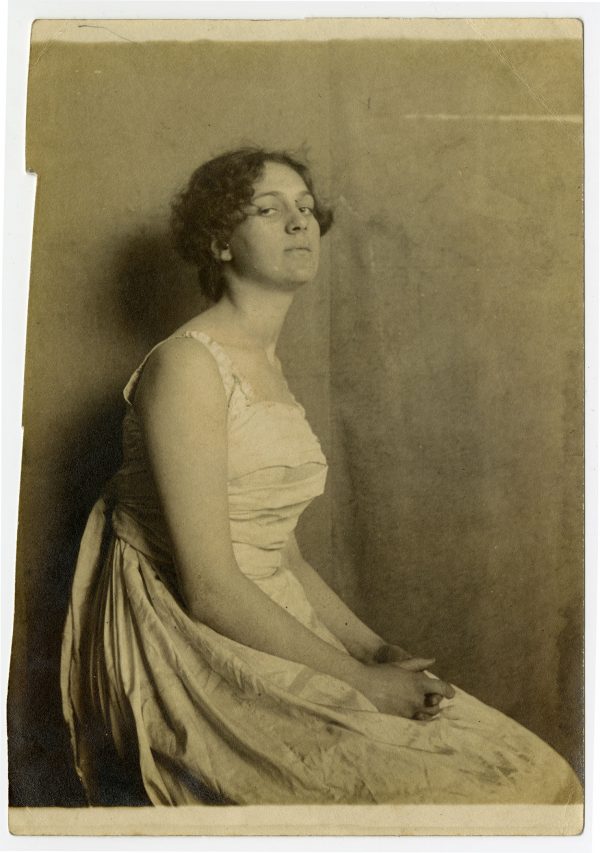 This portrait of Alma by Isabel Porter Collins at the Institute intrigued me even before I knew who the sitter was. The fierce combination of self-possession and ennui suggests a young woman impatient to get on, someone to be reckoned with. Indeed, known to have had an outsized personality that matched her lofty six foot stature, with her distinctive pluck, Alma would be on her way in just a few years from the time the portrait was taken.

Alma de Bretteville became Alma de Bretteville Spreckels, wife and heiress to the sugar magnate Adolph Spreckels, which enabled her to leave an indelible mark as a San Francisco philanthropist, socialite, and patron of the arts. San Francisco has Alma to thank for donating the Palace of the Legion of Honor to the city as well as her aid in the creation of the Maritime Museum. 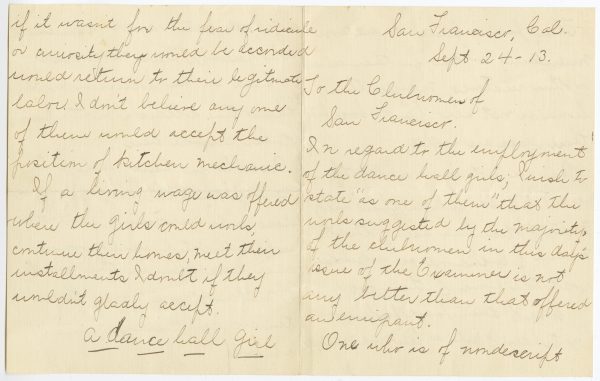 This letter, signed “a dance hall girl,” responds to an article published in the San Francisco Examiner in which members of The San Francisco Center of the California Civic League (an organization that later merged with the California League of Women Voters) suggested that women employed in San Francisco dance halls and bars turn instead to poorly-paid domestic labor. The author writes of the financial self-sufficiency achieved by women working in San Francisco dance halls, and closes her letter, “if a living wage was offered where the girls could work, continue their homes, meet their installments I doubt if they wouldn’t gladly accept.”

Read a full blog about this topic here. 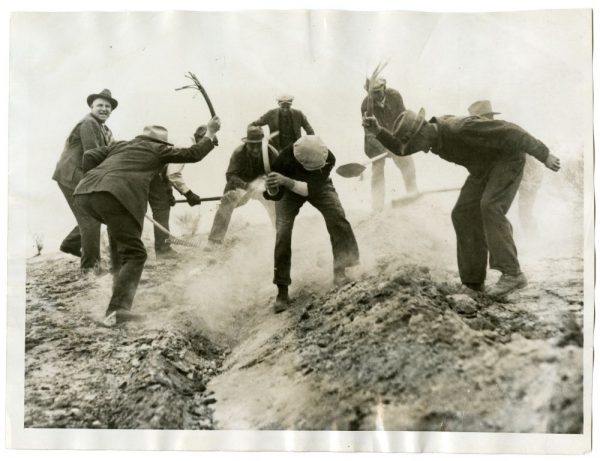 There are so many items in the collection that warrant reverence. This photograph elicits a different response in me—something more like a furrowed brow and a head shake. Engulfed in a cloud of dust, a group of men hit the ground with sticks in an effort to eradicate field mice. The newspaper caption on the back explains: “Extreme means have been adopted to eliminate this plague. Lengthy trenches filled with poisonous wheat have been dug. Volunteers beat about the various sections, killing the mice in droves. Some progress has been made in the battle against the mice, but further greater efforts on the part of the government bureaus is expected.” Surely with tongue-in-cheek, the photographer conjures a scene of utter futility, of “government forces” engaged in combat against creatures that are both too small to see in the picture and apparently too numerous or too wily to control. 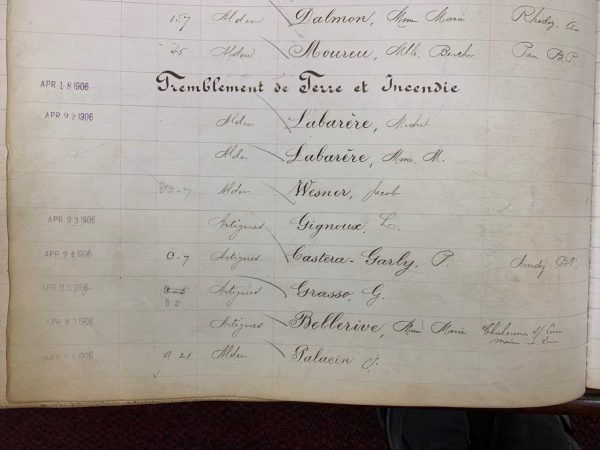 The first time I saw this ledger was for a showcase at the North Baker Research Library. I was struck by the beautiful French handwriting present within all the pages of the ledger. I have always been interested in San Francisco’s designation as “Paris of the West” and to see with my own eyes evidence of French institutions in San Francisco was really cool. Most importantly, this ledger provided its own information about the 1906 earthquake and fire and the subsequent intake of patients the hospital took in the aftermath. 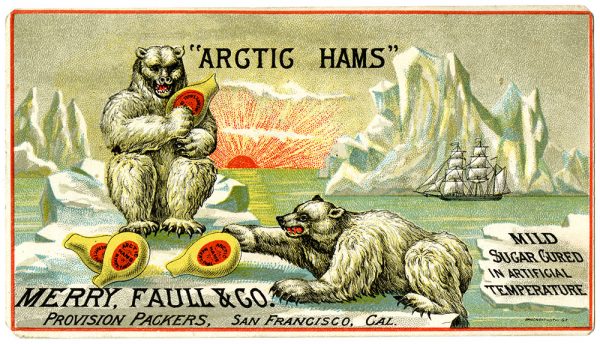 Sometimes, while scrolling through our digital library or while exploring the vaults at our location in San Francisco, I’ll find something that is just weird and delightful. Often this happens with old advertisements or newspaper articles where the language, tone, and sentiment seem very much from another time. I recently stumbled upon this “Arctic Hams” image from our trade cards ephemera collection and it made me laugh. I love how colorful it is and how the polar bear is cradling the ham. I assume the hams are “arctic” because they are “sugar-cured in artificial temperature.” It makes me wonder who came up with the branding.

The CHS trade cards ephemera collection consists of trade cards advertising a variety of trades, goods, and services. The bulk of the materials are color lithographs dating from 1880-1900. Some of the trades, goods and services advertised include food and beverages, household goods, furniture, clothing, shoes, pharmacies, medicines and tonics.

Similarly colorful and amusing items can be viewed online via our digital library in the crate, can, and bottle label collection. 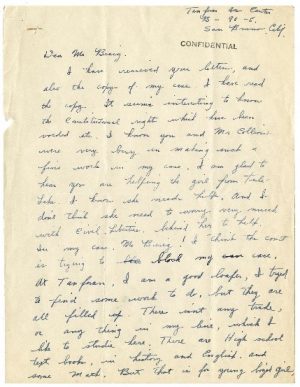 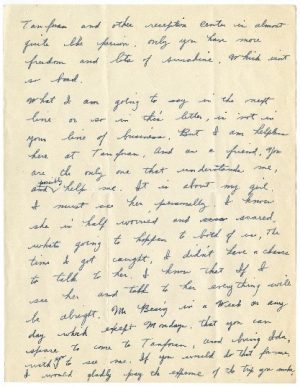 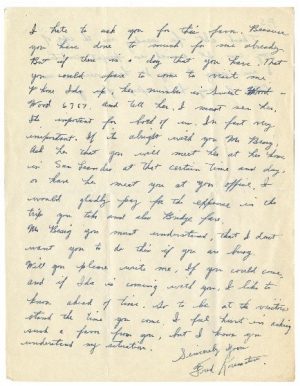 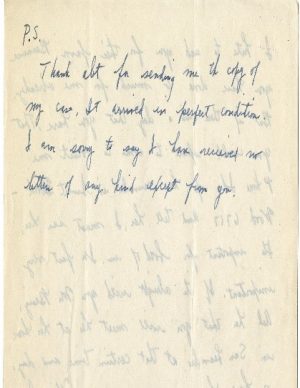 This letter is one of several written by Fred Korematsu to Ernest Besig in 1942 and 1943 and is part of  the ACLU of Northern California records held at the California Historical Society. Korematsu, a native-born U.S. citizen, was one of thousands of Japanese Americans and people of Japanese descent that were detained at Tanforan Assembly Center in San Bruno, California in 1942. Besig was executive director of the ACLU of Northern California. I find this letter incredibly meaningful because of the important role Korematsu plays in U.S. civil rights history. When awarding Korematsu with the Presidential Medal of Freedom, President Bill Clinton said of Korematsu, “In the long history of our country’s constant search for justice, some names of ordinary citizens stand for millions of souls: Plessy, Brown, Parks. To that distinguished list, today we add the name of Fred Korematsu.” But this letter also helps us humanize this civil rights luminary. In 1942 he was a lonely young man who missed his girl but did not hesitate to express his appreciation for Besig, his friend and advocate. In the last line he laments, “I am sorry to say I have received no letters of any kind except from you.” Evidently, he felt like everyone had forgotten him. Little did he know then that his story would live on forever. 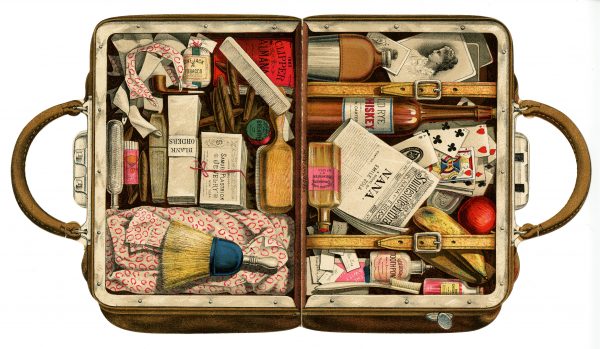 Let us consider what is revealed in this image.

A circa 1883 advertisement for the Pacific Coast Trunk Store in San Francisco, part of the California Historical Society’s California Business Ephemera Collection, 1849 – 2000. The trade card tantalizes by approximating voyeurism, a traveler’s hand luggage thrown open for greedy inspection: the contents of the yawning valise are on view to invite our inspection and conclusions. What we find inside the handsome carry-on bag (as we would now refer to it) elides time and sketches a type.

Hale-fellow-well-met, our absent drummer keeps beside him the trappings of his peripatetic career:

For our unrushed perusal, the incidental chattels of an individual life and all the hallmarks of ephemera: immediacy, vividness, topicality, novelty, exuberance, taste, style, the ethos of a particular cultural moment. Ephemera concentrates the fleeting and, as a result, reanimates the past: a vivid inventory of yesteryear. This absent travelling salesman of circa 1883 reaches out to us through the contents of his valise and across the years and we well recognize the stereotype, I think.

Diaries and letters, of course, represent the aristocracy of ephemera, a veritable feast of the ephemeral: consolidating personal accounts of fleeting events and even more fleeting and subjective responses to them. That is a topic for another day.

To explore other examples of ephemera in the collections of the California Historical Society please visit:

Women have full suffrage in Australia, New Zealand, Norway, Finland, Isle of Man, Tasmania…why not in California? Printed by the College Equal Suffrage League, circa 1911, California Historical Society, Vault B-119. 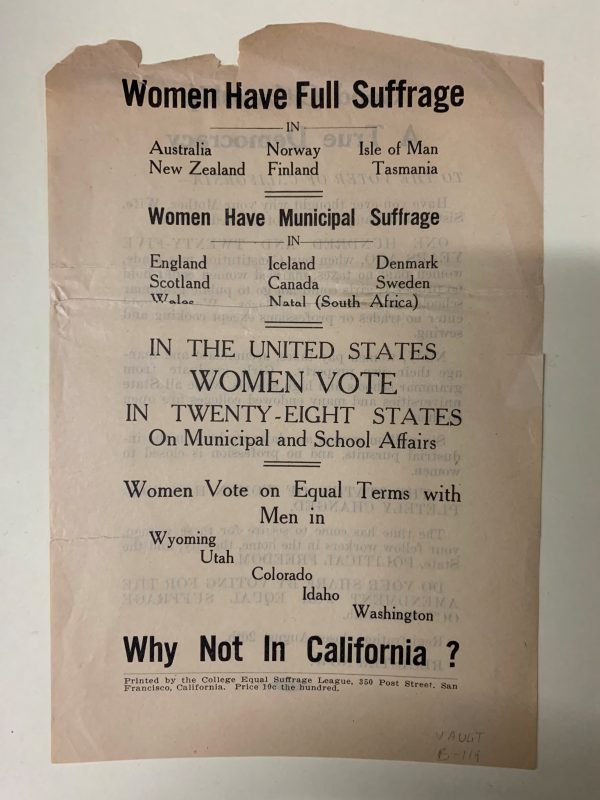 This broadside takes us back to 1911 when women were campaigning to win the right to vote within California.  I love that this one artifact provides us with so much information.

Although undated, we estimate it was created around 1911 because of the other states and countries it lists (women in Washington State obtained suffrage in 1910). It also makes apparent that suffrage at this time was definitely a global movement – with California suffrage being compared to other states and nations. This particular campaign material was created by the College Equal Suffrage League (check out the small print!), a national organization begun in 1900 aimed at getting college and college educated women involved in the movement. And speaking of which, it is also a wonderful example of the kinds of promotional material that the 1911 campaign created and used.

This broadside is a bit like the 1911 campaign for suffrage in California – big, bold and visible. 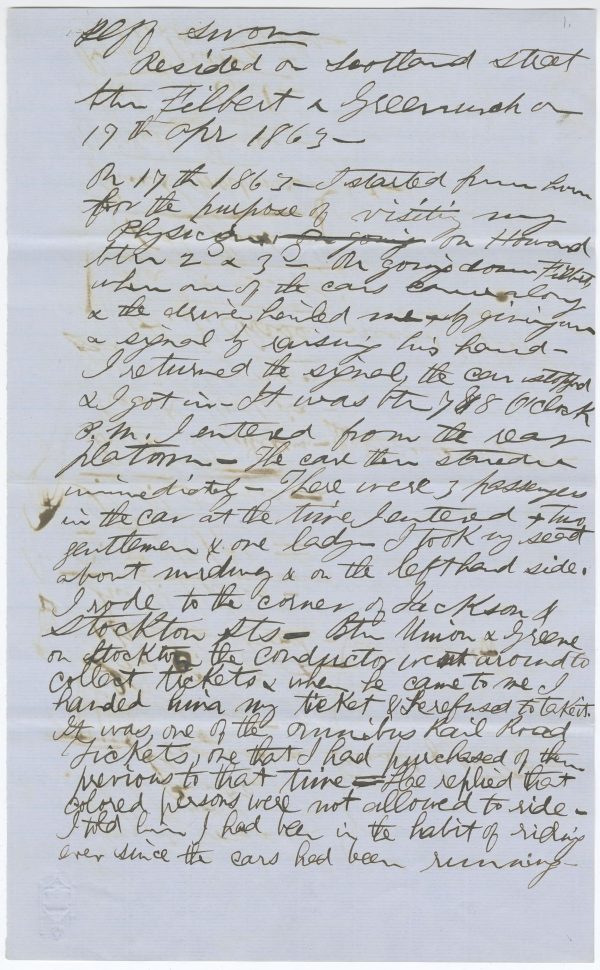 I am amazed by this event from the 1860’s about a woman in San Francisco who was forcibly removed from a streetcar by the conductor. At 8PM on April 17, 1863, Charlotte Brown took a seat on a horse-drawn streetcar one block from her home on Filbert Street in San Francisco. She refused to get off the street car even though “negros were not allowed” to ride. We have her written testimony about the event in our archives.

Fellow activists helped her sue the streetcar company. In his judgment of October 5, 1864, Judge Orville C. Pratt of the 12th District Court upheld the earlier verdict in favor of Brown, ruling that excluding passengers from streetcars because of their race was illegal. He had no desire, he said in his ruling, to “perpetuate a relic of barbarism”:

“It has been already quite too long tolerated by the dominant race to see with indifference the negro or mulatto treated as a brute, insulted, wronged, enslaved, made to wear a yoke, to tremble before white men, to serve him as a tool, to hold property and life at his will, to surrender to him his intellect and conscience, and to seal his lips and belie his thought through dread of the white man’s power”, Judge Pratt stated.

In January 1865, a jury awarded Brown $500. The Omnibus Railroad Company appealed the verdict but was refused another trial.