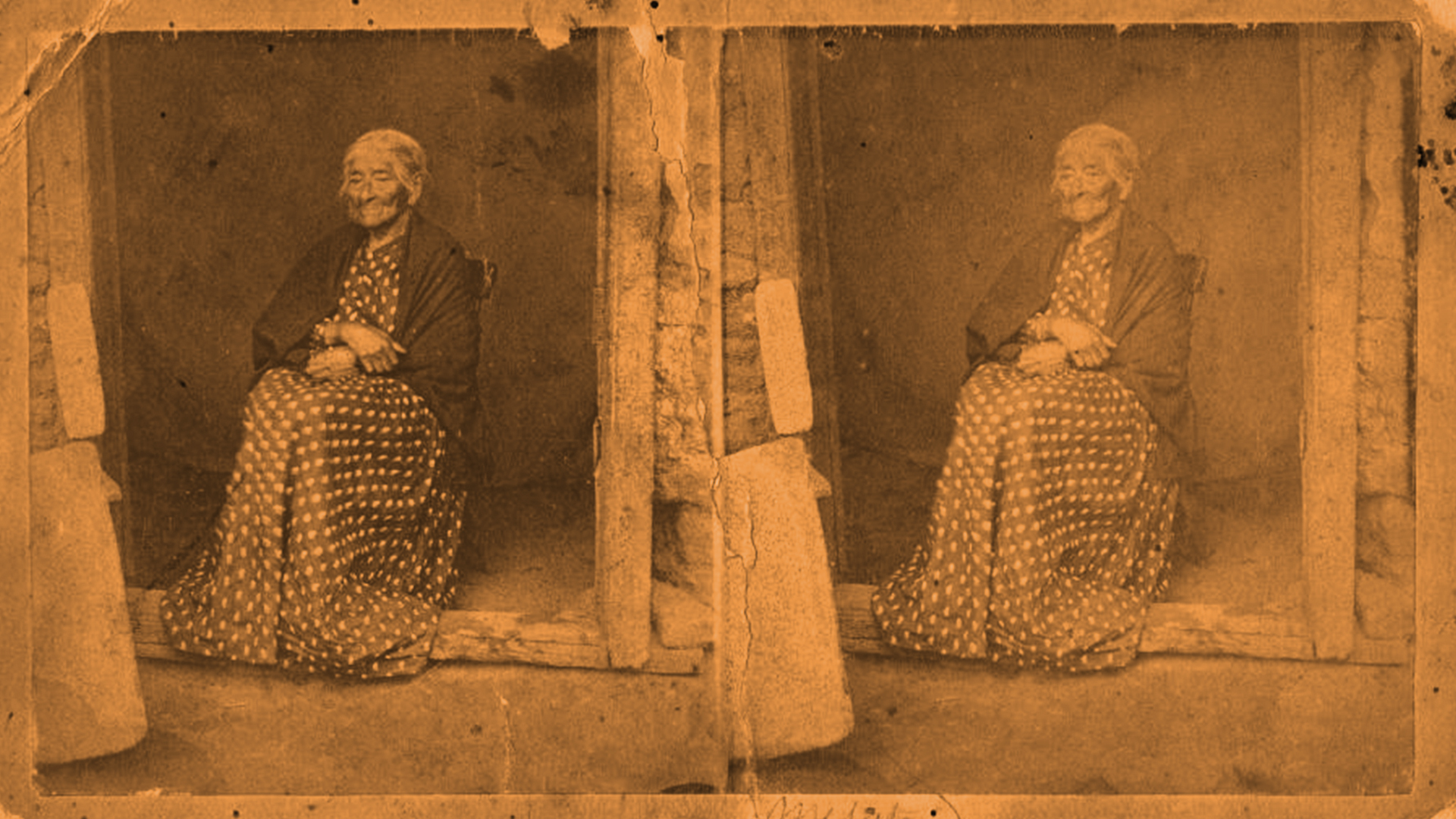 September 15 marks the beginning of National Hispanic Heritage month. Over the coming weeks, we plan to highlight California Historical Society collections that document and illuminate the early Hispanic experience in our state. Today’s post features photographs of Eulalia Pérez, a woman whose life spanned California’s Spanish, Mexican, and American periods.

September 15 marks the beginning of National Hispanic Heritage month. Over the coming weeks, we plan to highlight California Historical Society collections that document and illuminate the early Hispanic experience in our state. Today’s post features photographs of Eulalia Pérez, a woman whose life spanned California’s Spanish, Mexican, and American periods. When she recounted her life story for Hubert Howe Bancroft’s History of California, Pérez described her parents as “white,” an identification that reflected Spanish colonial settlers’ fluid understanding of race based on factors such as lineage, spoken language, and economic position.

When this photograph was taken in 1876, Eulalia Pérez was reputed to be 140 years old. This fantastic notion was popularized by a group of Southern California boosters who thought that it could impart some publicity to their sparsely populated region of the state. In fact, some of them were hoping to send her to the Philadelphia Centennial Fair that summer, where they hoped her alleged age would convince people that Southern California was a spectacularly healthy place. One of her daughters, who judged that the effect would have been to demean her mother, successfully blocked the project.

In 1877, Eulalia gave her testimonio (see excerpt below), a narrative of her life and experiences, to Thomas Savage as part of a research project for Hubert Howe Bancroft’s History of California. Pérez’s parents, like most settlers in Baja California, were both mestizos. Her insistence in her interview that they were both “white” testifies to the strong desire of many colonial residents of the Spanish Empire to distinguish themselves sharply from the indigenous population.

As Pérez goes on to describe, she came to Alta California when her soldier-husband, Miguel Antonio Guillén, was assigned there in 1802. They lived at San Diego and Mission San Gabriel. Seven of their twelve children survived into adulthood. Guillén died in 1819 and Eulalia remained at Mission San Gabriel, where she was eventually appointed llavera (keeper of the keys).

She remarried in 1832. Her new husband, Juan Mariné, was granted a large rancho, San Pascual, the site of the present cities of Pasadena and Altadena, which eventually ended up in other hands. Eulalia remained at San Gabriel and spent the last years of her life with a daughter and son-in-law at San Isidro. She died on June 11, 1878.

I do not remember the date of my birth, but I do know that I was fifteen years old when I married Miguel Antonio Guillén, a soldier of the presidio company of Loreto. When I was living in Loreto, I had three sons and one daughter. Two of the boys died in Loreto at a young age and another boy, Isidoro, came with us to Alta California. I had one girl, Petra, who was eleven years old when we moved to San Diego. I lived in San Diego for eight years with my husband. He continued his service as a soldier at the presidio of San Diego. In 1812, while I was attending Mass at the church at San Juan Capistrano, there was a huge earthquake that knocked down the tower. I ran through the sacristy and was knocked to the ground in the doorway. I was pregnant and could not move, and people stepped on top of me. Soon after, I returned to San Diego and almost immediately gave birth to my daughter María Antonia.

Everyone in San Diego respected me very much. I was treated with much affection in the homes of the important people. I had relatives who lived in the vicinity of Los Angeles. I wanted to go see them. The presidio commander would not let me go because there was no other woman at the presidio who knew how to deliver babies. I assisted the women who were in labor.

The Fathers at Mission San Gabriel wanted to help me because I was a widow supporting a family. I became the llavera [keeper of the keys] and had various responsibilities. I was in charge of the distribution of the rations and of the Fathers’ kitchen. I was in charge of the key to the clothing storehouse from where material would be taken to make clothing. All work having to do with clothing was done by my daughters under my supervision. I would cut and arrange the pieces of material and my five daughters would do the sewing.

I had to supervise the area where soap was made and the wine presses. I worked in the crushing of olives to make olive oil. I supervised everything related to the making of saddles and shoes.

In addition to supporting me and all my daughters until they married, Fr. Sánchez gave me land for one rancho and land for an orchard. All the Indians wanted him to give me the land since I had always taken care of them and helped them.

Eulalia Pérez (1766–1878), Excerpt from “‘An Old Woman and Her Recollections,’ Dictated by Doña Eulalia Pérez, Who Lives at Mission San Gabriel at the Advanced Age of 139 years, to D. Tomás Savage for the Bancroft Library,” Testimonios: Early California through the Eyes of Women, 1815–1848, ed. Rose Marie Beebe and Robert M. Senkewicz (Norman: University of Oklahoma Press, 2015), 1877. www.oupress.com