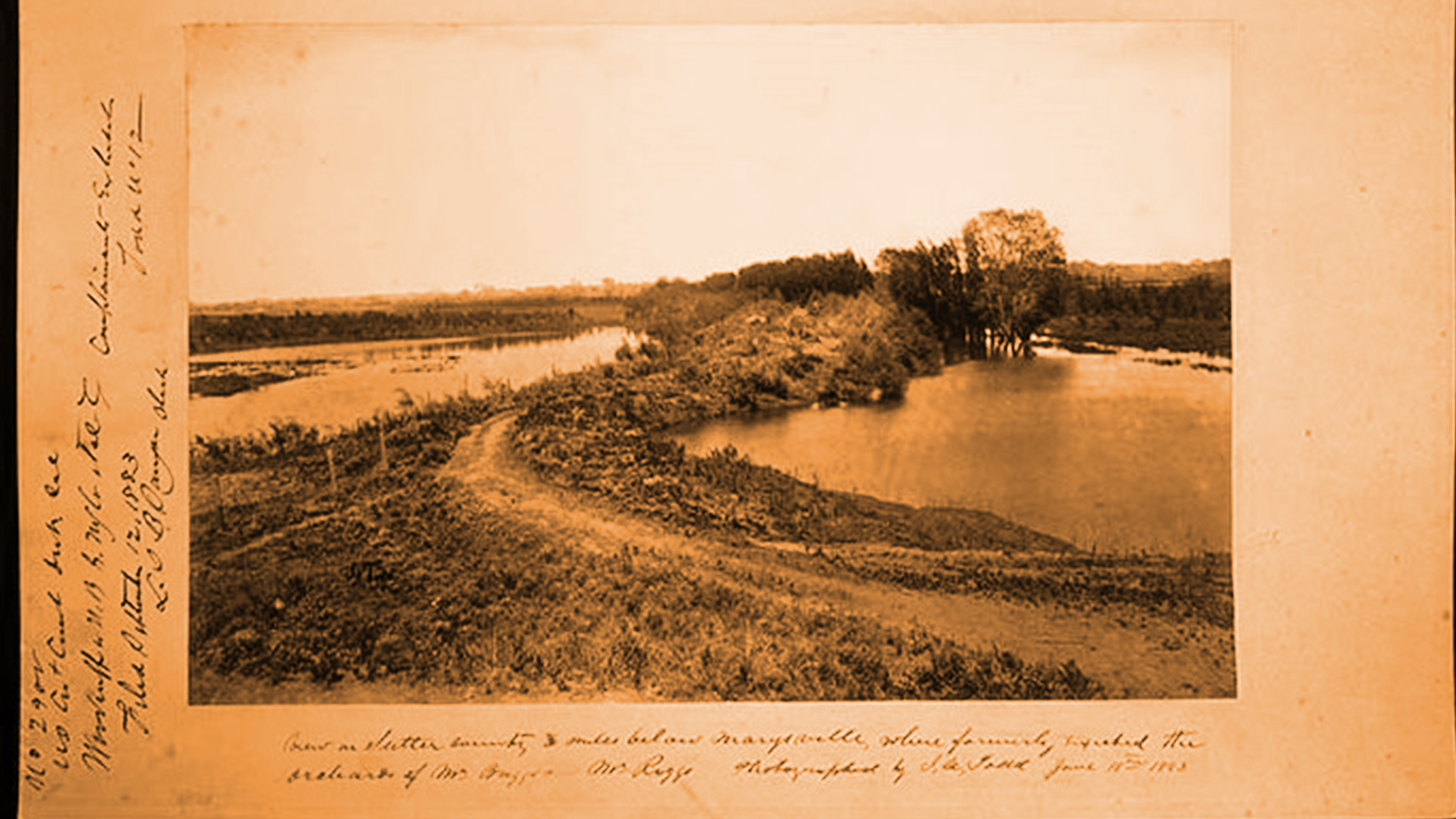 Today the California Historical Society observes Earth Day with a photograph from our collection that influenced the outcome of the first environmental legislation in California and the American West.

“April 22 seeks a future worth living.”

Forty-six years ago—April 22, 1970—more than 20 million people around the country gathered to demonstrate a growing awareness of environmental abuses. An outgrowth of the counterculture revolution of the 1960s, the nationwide event known as Earth Day sparked the passage of landmark environmental laws, including the Clean Air Act (1970), the Clean Water Act (1972), and the Endangered Species Act (1973), as well as the establishment of the United States Environmental Protections Agency (1970).

Today the California Historical Society observes Earth Day with a photograph from our collection that influenced the outcome of the first environmental legislation in California and the American West.
Woodruff v. North Bloomfield Gravel Mining Company (1884)

The photographer John A. Todd was a would-be Argonaut, carpenter, house painter, upholsterer, and drawing academy professor before he “dawned on the photographic world” (as he wrote in his memoir) in Stockton in the 1860s.

Everybody wanted to sit for their pictures. Cartes de visite were new, and just come into demand. The [Civil] war was on in full blast, and girls were sending pictures to their soldier lovers and fathers; mothers, uncles, brothers, and sisters were following suit. Everybody was photograph mad. . . .

With diligence, he “stuck to it [photography] with a determination to get as near the bottom as my capacity would permit.”

So it may have come as no surprise to Todd that a series of his photographs about the devastating effects of the hydraulic mining method in California made a significant contribution to a landmark decision in Woodruff v. North Bloomfield Gravel Mining Company (1884), which ended the process’s destructive environmental impact in the state.

For three decades beginning in the mid-1800s, Edward Woodruff, a Marysville landowner and wheat farmer, watched the destruction of his property and crops along the Yuba River. The culprit: hydraulic mining for gold in the Sierra Nevada.

The powerful hydraulic process had replaced gold excavation by hand, also known as placer mining. It involved using a hose under great pressure to shoot water into layers of rock and gravel, exposing the gold deposits beneath. Over time, rivers became clogged with debris, ruining crops, causing flooding, and creating a sediment called “slickens.” Residents downstream complained about their health. Hilltops were washed away, the debris finding its way to the bottom of the San Francisco Bay.

As one visitor to North Bloomfield’s mining operations observed in 1879:

The actual work of tearing down the cliff is hard to see, for there is a cloud of red foam hanging over the spot. You hear little rattling and slipping noised through the incessant roar, and a stream which seems ten times greater than could come out of the pipe flows down the dripping pile, and so into the rock-channels which lead to the tunnel. . . . The stream of water is so powerful that no man could stand against it a moment. The water after leaving the tunnel is carried half a mile or so in a flume, so as to allow a chance for undercurrents to collect more of the gold . . . and then the thick muddy stream is all owed to find its own way down without hindrance.

Their Day in Court

By 1884, California was leading the nation in the production of wheat, and the timing was right for angry farmers to object this threat to their crops. Edward Woodruff decided to take his complaints to the federal courts. The resulting case, Woodruff v. North Bloomfield Gravel Mining Company (1882–84), pitted farmers against the mining company that was operating the world’s largest hydraulic gold mine.

Part of the evidence used in support of Woodruff’s case were the photographs made by photographer John A. Todd, which were commissioned by Woodruff’s legal team. In two series of prints, made in 1882 and 1883, Todd documented the destruction caused by debris and flooding from the North Bloomfield mining operation.

Todd’s first series depicted the faulty nature of the North Bloomfield dams in Yuba and Nevada Counties. The second provided evidence of the wide-ranging flooding, 60 miles away in Marysville and farther, caused by the collapse of North Bloomfield’s English Dam. These photographs included that of vanished orchards, featured here, whose caption leaves no doubt as to the flood’s impact. On June 4, 1883, Todd himself appeared before Sawyer’s court in Sacramento to testify to seven of his photographs that were introduced as evidence in the celebrated case.

In his January 7, 1884, decision Justice Lorenzo Sawyer ruled in Woodruff’s favor while leaving an opening for review should the mining companies employ different, and safer, technologies in the future:

After an examination of the great questions involved, as careful and thorough as we are capable of giving them, with a painfully anxious appreciation of the responsibilities resting upon us, and of the disastrous consequences to the defendants, we can come to no other conclusion that that complainant is entitled to a perpetual injunction. . . . Let a decree be entered accordingly.

Predictably, the farmers celebrated. As a 1924 history of the region observed:

There were great demonstrations of joy throughout the valley, at the news of the decision in favor of the farmers. Strong men wept, as bells pealed and whistles blew the note of victory for the valley. Stores and business houses were illuminated that night; bonfires’ blazed on every corner; cannons roared, while the church and school bells chimed in. There was joy and delight everywhere; and real estate advanced 100 per cent in value. From every section of the State came press notices congratulating the farmers upon the attainment of their right to defend their homes and farms and families. As far south as Bakersfield, felicitations were printed in the newspapers. The people of Marysville and Yuba City could scarcely contain themselves.

The ruling, known as the Sawyer Decision, virtually ended hydraulic mining in the state of California. In 1899, the California Miners’ Association painted a bleak picture of its impact:

The result of the Sawyer decision, through the many other suits filed, was to close at once practically every hydraulic mine in Nevada, Plumas, Sierra, and adjoining counties, and in the Mother Lode counties to the south. They remained closed for years, and the industry practically remains prostrate yet. The effect on the mining counties may be illustrated by the statement that, in the ten years from 1880 to 1890, the assessed valuation of property in Nevada County shrank $10,000,000, population dwindled, and the rate of taxation doubled. Many mining towns were practically deserted, highways showed little life, and, as interest in mining of every form was at an ebb, there was a long season of complete depression.

As for John Todd’s photographs: A 2014 thesis exploring the relationship between photography and environmental activism suggests that, “the work of J. A. Todd pioneered the use of photographer in order to implicate . . . industrialists of causing pollution to the environment.”
—
Written by Shelly Kale, Publications and Strategic Projects Manager at the California Historical Society
Sources
X