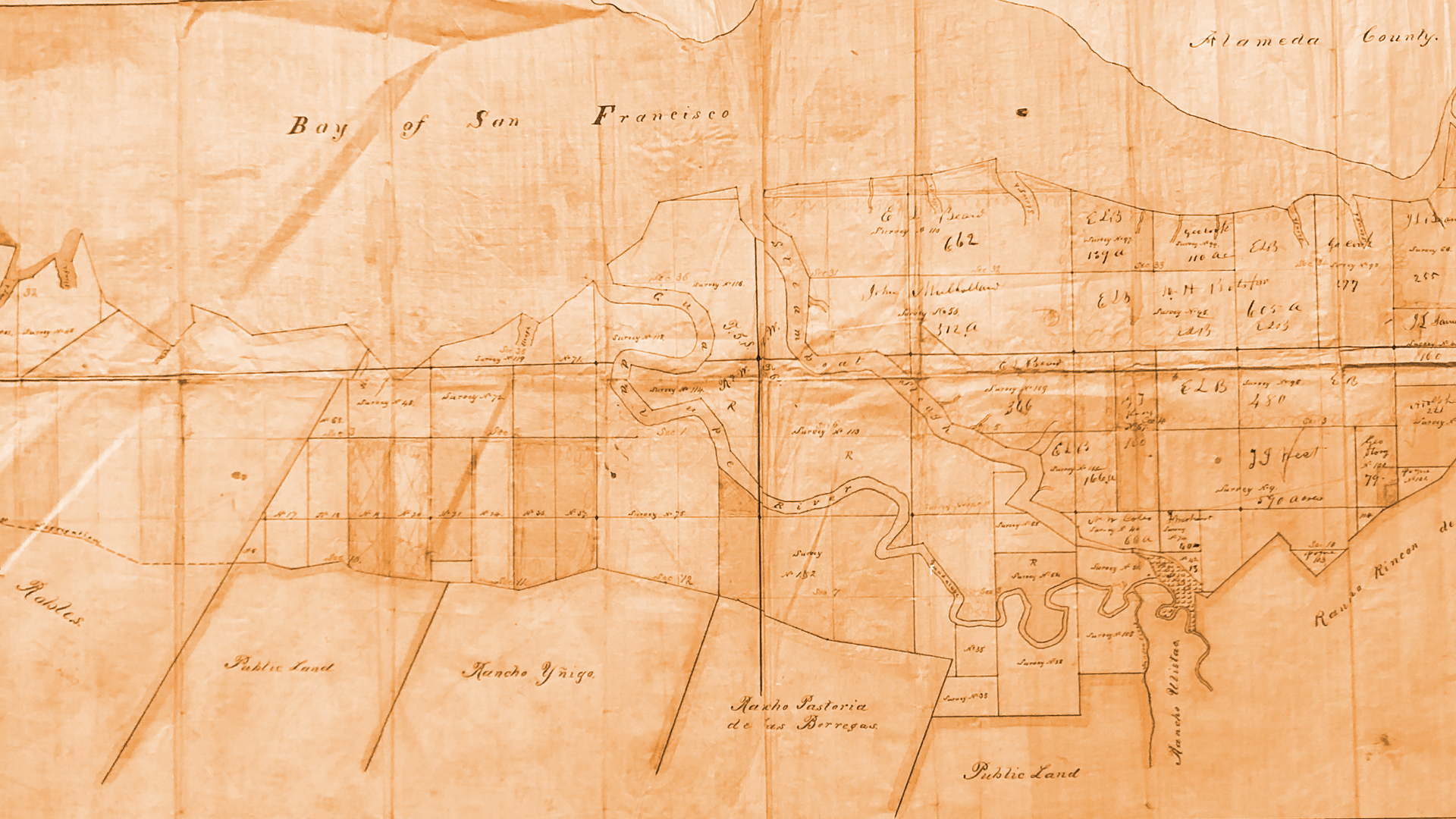 Among the 5,000 to 6,000 maps in the California Historical Society’s collection are many examples of rare and unique titles. Below is a sampling of a few recently cataloged items.

Among the 5,000 to 6,000 maps in the California Historical Society’s collection are many examples of rare and unique titles. Below is a sampling of a few recently cataloged items:

1. An interesting manuscript Map of St. Louis, surveyed and drawn by Asa F. Bradley, dated 1850. The developers of the proposed settlement had grand plans for a relatively large (103-block) town which included wide diagonal streets and a central plaza. It was located south of the City of Sonoma and is currently of much more modest in size. Over the years it was known as Saint Louis, Saint Louis Landing, San Luis, and currently Embarcadero. The map is in pen-and-ink.

2. Plan of Marysville lays out all the city blocks, lots and squares. It was published in Marysville by Eddy Brothers, Stationers, and was beautifully lithographed by Alexander Zakreski in San Francisco. Zakreski (or Zakrzewski, 1799-1863) was a Polish emigrant and skilled mapmaker and lithographer. The map is on indefinite loan to CHS from the De Young Memorial Museum.

3. A Map of a Portion of the Hock Farm surveyed by Nelson Wescoatt in 1857 and drawn in 1860. Sutter Hock Farm, north of Sacramento on the Feather River, was the first non-Indian settlement in Sutter County and was established in 1841 by early settler John A. Sutter. The hand-drawn map, in pen-and-ink and watercolor on cloth, includes a beautifully decorated north arrow. It was given to CHS by F.S. Hudson in 1946. 4. Another colorful manuscript map entitled Map of All the Swamp and Overflowed Lands in Santa Clara County … 1868 to 1872 was drawn by the County Surveyor A.H. Parker. It shows lots, land owners, land grants and watercourses. The map includes a table of surveyor’s courses and distances and is drawn in pen-and-ink and watercolor on cloth. 5. An Outline Map of Southern Central California Showing Railroad and Steamboat Routes, although undated, was probably published in the 1880s by Wallace W. Elliott & Co. in San Francisco. Counties are hand colored.

6. Hill Street, 6th to 10th St[reet]s, Los Angeles, California is one of about 130 blueline print maps covering business districts in Southern California, Arizona and Nevada drawn by Coldwell, Cornwall & Banker (later Coldwell, Banker). This one is dated July 1938 and shows individual businesses with lot sizes. Firms shown include The May Company and Bullocks department stores and the Los Angeles Theater. Slightly over half of the CHS maps that have been cataloged over the last three years are unique to WorldCat (the world’s largest library catalog). That is, at the time of cataloging no other library had created records for these maps. To date 3,200 maps (or about two-thirds of the collection) have been cataloged. Records for them may be found in our online library catalog as well as in WorldCat.