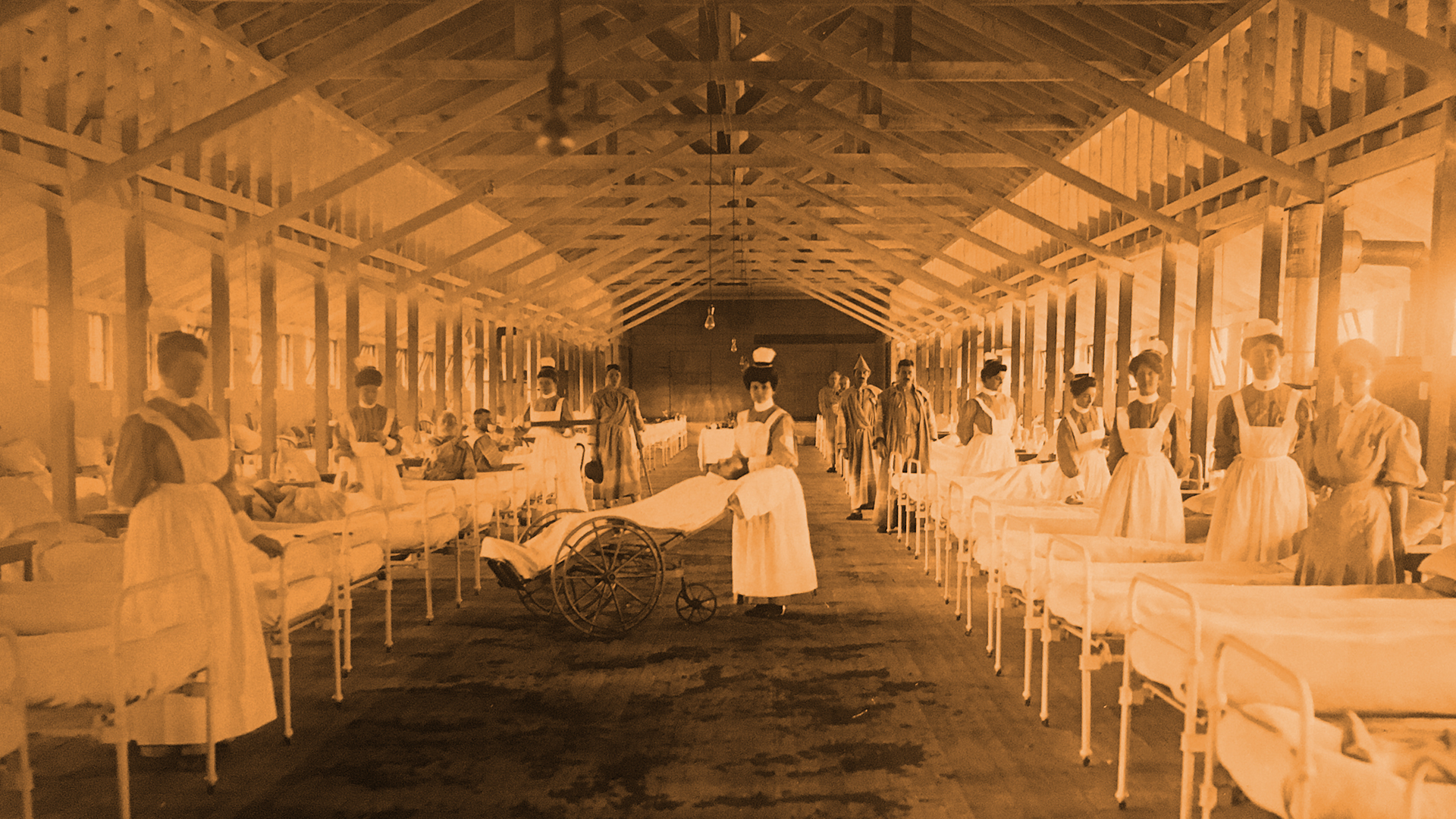 An Improvised Hospital in San Francisco

As our cities, states, countries, and world adapt in response to COVID-19, history serves as a window into understanding how communities have previously shown resilience, and have united to improvise, during hardship and disaster. In the case of this intriguing image, San Franciscans created a makeshift hospital on a racetrack in Ingleside to stop a bubonic plague outbreak.

When I first came across this photograph of nurses in their white uniforms standing amid neatly lined hospital beds at Ingleside Race Track, I assumed that it was a temporary hospital serving those injured in the 1906 earthquake and fire. Although the race track, unused since its last horse race on December 30, 1905, did briefly become a place for earthquake refugees and medical support, the ward you see in this photo was actually created a year or more later to deal with the outbreak of bubonic plague that spread through San Francisco’s vulnerable neighborhoods.

In 1907, despite the massive rebuilding projects that the City was undertaking, many residents were still living without access to proper housing, water, and health services and it was in this environment that rats – and the plague their fleas carried – flourished. According to Joanna Dyl in her book, Seismic City: An Environmental History of San Francisco’s 1906 Earthquake, the City and County Hospital at Potrero Avenue and 22nd Street had been erected as a temporary hospital 35 years prior. Since that time, the building had been repeatedly condemned by successive Boards of Health for its unsanitary conditions. It was not long after the hospital started receiving patients with the plague that one man developed symptoms while at the hospital, leaving no doubt that the building itself was now infested. Attempts to fumigate proved unsuccessful and the only course of action left was to burn the building to the ground. Ingleside Race Track, now emptied of refugees from the quake, was brought back into service as a temporary hospital. Six buildings were converted into wards, surgery, and supply rooms and the first patients were moved there on April 10, 1908.

I suspect this photograph makes the conditions seem better than they actually were. The race track buildings were drafty and difficult to work in and, despite what this image implies, there was also a shortage of nurses. In his report to city officials in 1908, William Dorr, Warden of the City and County Hospital ended with a plea to the Board of Health:

“We would most earnestly call your attention to the inadequacy of the present number of nurses in the Training School in this hospital, to properly care for the patients we now have. We have 20 nurses to care for 273 patients, making one nurse for every 13 patients, and several of them will graduate very shortly. In a hospital run on the ward plan, there should be one nurse for every 8 or 10 patients.”

Construction of a new city and county hospital to replace the old one at 22nd and Potrero started soon after in 1909, and the Ingleside Race Track was once again abandoned. In 1910, the racetrack property was purchased by the Urban Realty Improvement Company and developed into the neighborhood known as Ingleside Terraces.