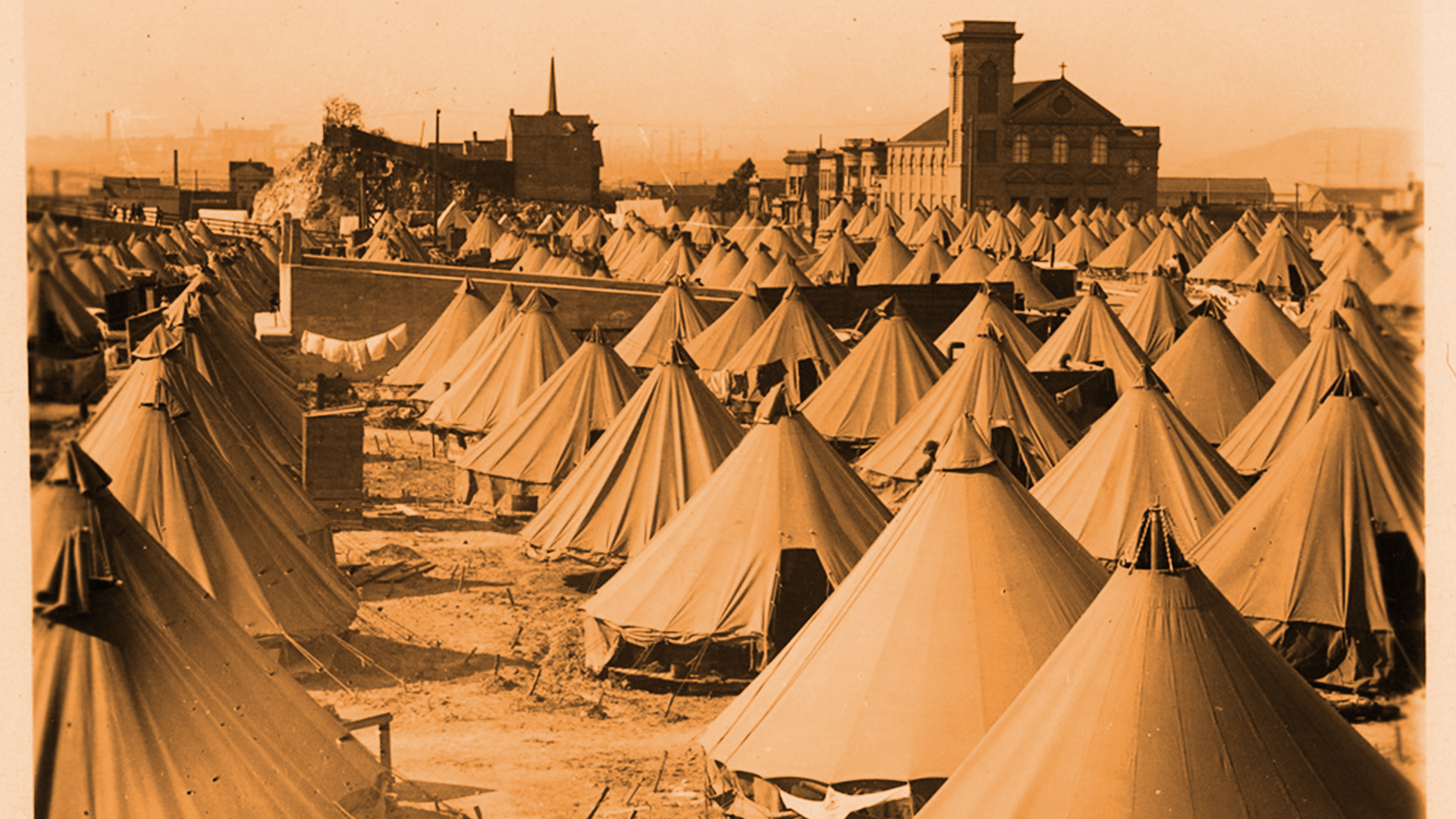 The 1906 San Francisco earthquake and resulting fires became a defining moment in history. Photographs in the California Historical Society’s collection document both the destruction and reconstruction of the city. Personal diaries, journals, and letters provide us with first-hand accounts of daily life in the aftermath of the quake.

At 5:12 on Wednesday morning, April 18, 1906, an earthquake of estimated 7.9 magnitude jolted San Francisco and the greater Bay Area residents awake. The quake lasted less than a minute but the damage it wreaked left the city in ruins.

The 1906 earthquake and resulting fires became a defining moment in history. Over several days, while the already-damaged city burned, over 3,000 people died, nearly half of the city’s population of 400,000 were left homeless, and inestimable numbers of vital artifacts and records were lost when cultural and city institutions were reduced to ruins and ash. It was a disaster that changed the city’s physical, social, economic, and cultural fabric and to this day we often think of San Francisco’s history as divided into pre-earthquake and post-earthquake periods.

Photographs in the California Historical Society’s collection document both the destruction and reconstruction of San Francisco. Personal diaries, journals, and letters provide us with first-hand accounts of daily life in the aftermath of the quake. Other materials such as broadsides, ephemera, artifacts, and official correspondence provide insight into the complicated role residents, business owners, church groups, community organizations, city officials, and the army played in the cleanup and rebuilding of a new San Francisco.

Relief efforts in the immediate aftermath of the quake were, as is the case in most disasters, carried out by family, friends, and neighbors, followed quickly by local charities, community, and religious organizations. Soon business leaders got involved and the San Francisco Relief and Red Cross Funds was formed with the Governor of California, George C. Pardee, the mayor of San Francisco, Eugene Schmitz, and other prominent and recognizable San Franciscans including I.W. Hellman and Charles Sutro, Jr. on the board of directors.1

In the first days after the quake people slept out in the open or under whatever shelter they could find. Tents, distributed by the military, were set up in designated locations around the city before eventually being replaced by wooden huts known as earthquake cottages. There were twenty-six official refugee camps around San Francisco, twenty-one of which were managed by the army. These camps, however, reflected the racism of the time and Chinese residents of San Francisco were ultimately forced to a segregated camp in a remote area of the Presidio, farther away from access to medical care and food supplies.

U.S. Army troops, based nearby in the Presidio, played a large role in the City’s relief efforts by establishing control in many areas aside from refugee housing. General Orders No. 18, issued on April 29, 1906 gives some insight into the organization behind the military’s relief effort. First, they divided the city into seven relief sections, then assigned Army officers and assistants to each section “with the view of coordinating the work and introducing at the earliest moment such methods as will prevent dishonesty or wastage, eliminate the unworthy and impostors, and insure economical administration.”2

Army officers were also directed to work with the mayor’s committee and the Red Cross to set up and run hospitals and food distribution locations. Incredibly, considering how much of the city’s infrastructure was destroyed and the poor living conditions of the thousands of now-homeless residents, very little disease broke out. The San Francisco Board of Health appointed 500 physicians to form a group of sanitary inspectors who worked with the Army to reduce the risks of disease usually associated with overcrowding, tainted water and poor sanitation. In General Orders No. 14, Major General Adolphus Greely stated, “the division commander will retain control of sanitation…Our greatest danger in the future may be expected from unavoidable insanitary conditions, and every person is cautioned that to violate in the slightest degree the instructions of the sanitary officers would be a crime that could have no adequate punishment.”3

While many official reports highlight the Army’s role in keeping the peace and establishing relief efforts, personal letters and memoirs from that period tell a more nuanced story. Mayor Eugene Schmitz’s order “to KILL any and all persons found engaged in Looting or in the Commission of Any Other Crime” 4 was, in some cases, used as an excuse to harass and even kill civilians, with some residents documenting their fear of the soldiers who swarmed the city streets. In correspondence sent to the California Historical Society years later, Ernest W. Cleary, who was a member of the R.O.T.C. at the University of California, Berkeley at the time of the earthquake, recalls:

Soon afterward a woman came running from the fire area, wringing her hands and crying. She said “I just saw something awful. A man saw that the fire was coming and opened his grocery and told us to ‘help ourselves.’ A man came out with his arms full of groceries and a soldier ran up and stabbed that poor man with his bayonet.”5

Post-earthquake, San Francisco’s business leaders knew that the longer it took to rebuild the city, the more tenuous its place was as the economic and cultural hub of California. While some, aware that fires resulting from the earthquake had caused the most damage to the city, pushed for stronger building codes and a ban on wooden structures, others, eager to get the city rebuilt as soon as possible, pushed for ways to fast track construction. A compromise by the mayor allowed commercial property owners to rebuild without permits provided they limited it to a single story wooden or corrugated iron structure.

Fast forward to 1915 and the world’s fair. According to Laura Ackley, author of San Francisco’s Jewel City: The Panama-Pacific International Exposition of 1915, the makers of the fair had two goals in mind when they committed to host: celebrating the opening of the Panama Canal, and showcasing a rebuilt San Francisco after the 1906 earthquake and fire. In both they proved incredibly successful. San Francisco, once again, was ready to shine.