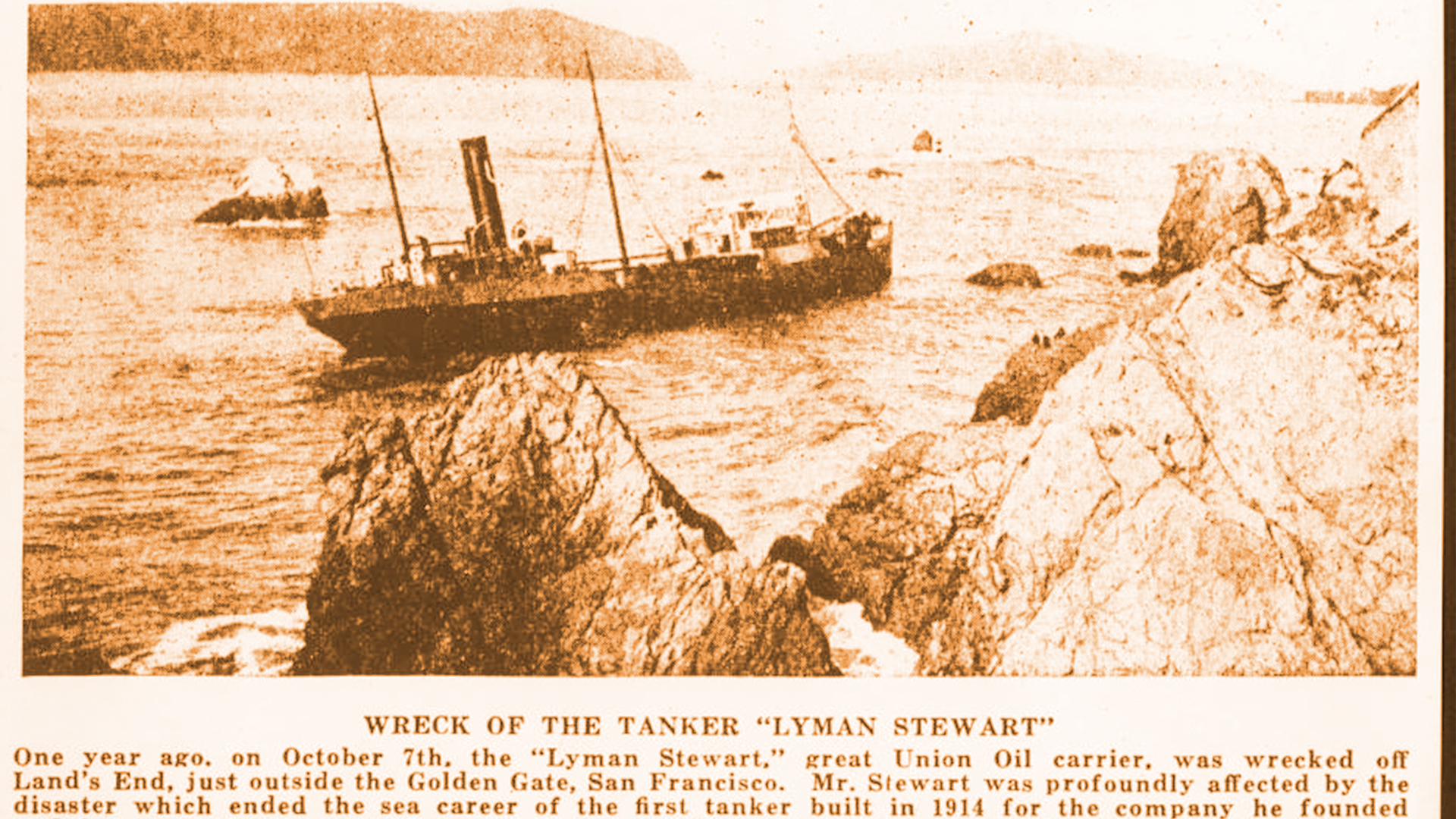 10 California shipwreck sites that can still be seen today!

Throughout history, fog, large swells, storms, and navigational errors regularly contributed to vessels wrecking themselves on California’s beaches, cliffs, and unanticipated offshore rocks. While some of these wrecked ships were salvaged or stripped, many still remain in place. Below is a list of ships, many en route between California’s largest ports in San Francisco and Los Angeles, that can still be viewed along California’s coast.

Of the photos in our newly opened exhibition, Boomtowns: How Photography Shaped Los Angeles and San Francisco, one of the images I find most striking is a mammoth plate panorama by Carlton Watkins documenting the San Francisco Bay from Nob Hill. Beyond the growing neighborhood of clapboard homes stretching out from the photographer’s foreground, we are able to view the low lying intertidal area that is now San Francisco’s Embarcadero. Several wooden schooners are anchored just offshore, likely moored after voyages across the Pacific, up from Cape Horn, or south from Alaska.

Those anchored ships are what strike me most about the image; they serve as the most tangible indicator of how far technology and transportation have evolved since the photo was taken. However, through all of that evolution, seafaring has remained beholden to the whims of the ocean and its conditions. Throughout history, fog, large swells, storms, and navigational errors regularly contributed to vessels wrecking themselves on California’s beaches, cliffs, and unanticipated offshore rocks. While some of these wrecked ships were salvaged or stripped, many still remain in place. Below is a list of ships, many en route between California’s largest ports in San Francisco and Los Angeles, that can still be viewed along California’s coast. These sites are best visited at very low tides when the wreckage is most exposed, and, as always, please use caution when exploring unfamiliar marine environments.

1. SS Monte Carlo, Coronado Island, San Diego County:
The 1920s oil tanker was converted into a floating casino. In its heyday, the Monte Carlo floated off of Coronado Island, taking advantage of a legal loophole that allowed for gambling and prostitution so long as the ship was moored at least 3 miles off shore in international waters. A storm on New Year’s Day in 1937 ripped the ship from its mooring, depositing it on Coronado Island. Given the illicit nature of the ship, no one laid claim to it, and the Monte Carlo hasn’t moved since!

2. SS Dominator, Palos Verdes Peninsula, Los Angeles County:
The freighter was traveling to Los Angeles from Vancouver with a cargo of wheat and beef. Never making it to the port, Dominator ran aground on the Palos Verdes Peninsula on March 13, 1961. Due to large surf and challenging weather, the Coast Guard was unable to pull the ship off the rocks and the crew were forced to abandon the stranded vessel. Dominator can be viewed at the base of the Palos Verdes Estate’s cliffs at low tide.

3. La Jenelle, Silver Strand Beach, Ventura County:
Built in 1931, the 400-foot cruise liner was on the market to be sold when a storm buffeted the ship ashore at Silver Strand Beach in Oxnard in 1970. After leaving her to sit for several weeks, the US Navy decided to remove the top of the ship and fill La Jenelle with rocks to provide an extension to the end of the Port Hueneme breakwater.

4. SS Winfield Scott, Anacapa Island, Ventura County:
The steamship was owned by the Pacific Mail Steamship Company, one of the two primary steamship companies connecting the East and West Coasts during the California Gold Rush. Winfield Scott left San Francisco bound for Panama on December 1, 1853 loaded with over 300 passengers and $1 million in gold. The captain, Simon Blunt, decided to travel through the Santa Barbara channel to save time. However, dense morning fog disoriented Blunt and lead him to prematurely steer the ship south east. Windfield Scott crashed into a rock lying off Anacapa Island at full speed and sustained 2 holes to the bow. Passengers and crew were forced to abandon ship and camp on Anacapa for a week before being rescued. The Winfield Scott now lies in shallow water off the island in the Channel Island National Marine Sanctuary, and over the years several sets of treasure seekers have searched the ship for gold and other valuable metals.

5. Barge, Salinas River National Wildlife Refuge, Monterey County:
A barge was blown ashore in a 1983 storm. After the owners were unable to remove the ship, it was left to rust on the beach. The barge is fully exposed on the beach, and it can be accessed by walking 1.5 miles north from the Salinas River National Wildlife Refuge.

6. The Sir John Franklin, Ano Nuevo State Reserve, San Mateo County:
The clipper ship was headed to San Francisco when it became emerged in heavy fog and crashed into rocks on January 17, 1965. The collision destroyed the ship and killed the captain and 11 crew members. The crew members were buried at the adjacent beach, which is now known as Franklin’s Point. In 1980, dune erosion led to the exposure of the buried sailors and archaeologists from San Jose State and Sonoma State Universities subsequently excavated the burials. The researchers discovered the remains of other burials, indicating the fatal history of ships grounding themselves at Franklin’s Point. Today, you can visit a platform located at the end of the point and take in the perilous rocks.

7. King Philip, Ocean Beach, San Francisco County:
The clipper ship was dragged into the surf line at Ocean Beach in January of 1878. The ship has remained in place since then, being battered by constant heavy surf. Surprisingly, it is still possible to view the wreck at a low tide and when storms have shifted sands off of the wreck. In order to view the wreck, plan to visit Ocean Beach at a minus tide and plot these coordinates into your phone or other GPS device: 37.751517, -122.509846. 9. SS Tennessee, Mill Valley, Marin County:
The passenger ship was one of the earliest ships to run aground while trying to enter the Golden Gate, crashing into the Marin coastline in 1853. All of the ship’s passengers, and its cargo of 14 chests of gold were all saved, but the Tennessee could not be salvaged. The beach where the vessel landed subsequently became Tennessee Cove, and it is still possible to see parts of the rusting engine lying on the beach.

10. USS Milwaukee, Samoa, Humboldt County:
In January of 1917, the Navy cruiser USS Milwaukee was sent to Samoa beach, near Eureka, to rescue a Naval submarine that had run aground. Unfortunately, the Milwaukee couldn’t withstand an onslaught of wind and waves and became beached itself. The crew was all saved and the ship scrapped for parts, though some rusting parts of the ship still protrude from the water. The remnants can be found near the Milwaukee Memorial, at the intersection of New Navy Base Road and Samoa Pulp Lane.